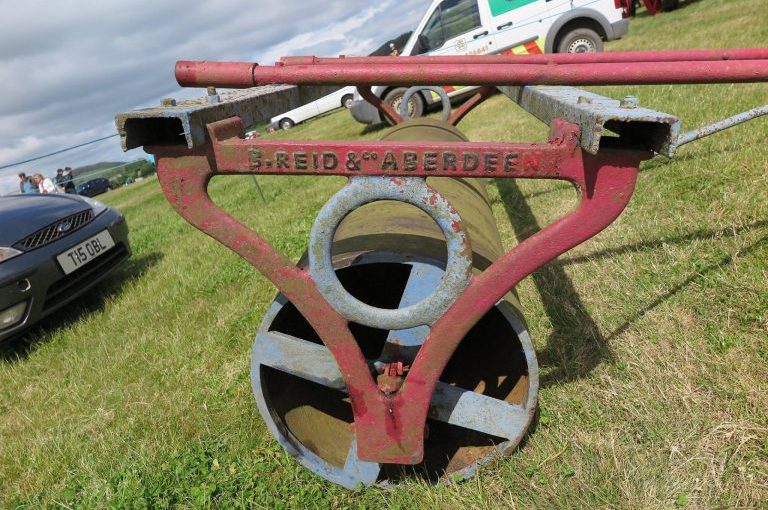 By the 1790s the “Agricultural Revolution” had been underway in Scotland for a number of decades. Fields were being enclosed and levelled, trees planted; the appearance of the landscape was being radically altered. With this change there started to be some technological changes in the tools and implements made. The most significant was the development of the iron plough – ploughs made all of iron rather than wood and wood and iron – which was drawn by the two horses rather than the team of oxen.

During this “Agricultural Revolution” there emerged a small number of agricultural writers who commented on the process of change, their observations on the new practices and gave advice to farmers and landowners on the improvement process. The most noted was Lord Kames, Henry Homes, renowned for his book “The Gentleman Farmer: being an attempt to improve agriculture, by subjecting it to the test of rational principles”. It was first published in 1776. It was to become a best-seller, going through 6 editions from that time until the early 1800s. No other Scottish agricultural book managed that feat. In that book Kaimes shows himself to be a practical farmer and to have given great consideration to agriculture and developing a set of rational principles on which it could operate. His book includes accounts of the most well-used implements of the time.

Kaimes was critical of some of the implements and machines, but he also provided a range of views on how to make them as good and effective as possible. For this reason, his accounts are worth quoting to show what was being used, what was seen to be effective and what changes could be made to them.

The following is an account from Kaimes on the roller, published in the 1798 edition of his book:

“The roller is an instrument of capital use in husbandry, though scarcely known in ordinary practice; and, where introduced, it is commonly so slight as to have very little effect.

Rollers are of different kinds, stone, yetling, wood. Each of these has its advantages. I recommend the last, constructed in the following manner. Take the body of a tree, six feet ten inches long, the larger the better, made as near a perfect cylinder as possible. Surround this cylinder with three rows of fillies, one row in the middle, and one at each end. Line these fillies with planks of wood equally long with the roller, and so narrow as to ply into a circle. Bind them fast together with iron rings. Beech wood is the best, being hard and tough. It has a double pair of shafts for two horses abreast. These are sufficient in level ground: in ground not level, four horses may be necessary. The roller without the shafts ought to weigh two hundred stone Dutch; and the large diameter makes this greater weight easy to be drawn.

With respect to the season for rolling. Rolling wheat in the month of April, is an important article in loose soil; as the winter-rains pressing down the soil may leave many roots in the air. Barley ought to be rolled immediately after the seed is sown; especially where grass seeds are sown with it. The best time for rolling a gravelly soil, is as soon as the mould is so dry as to bear the roller without clinging to it. A clay soil ought neither to be tilled, harrowed, nor rolled, till the field be perfectly dry. And as rolling a clay soil is chiefly intended for smoothing the surface, a dry season may be patiently waited for, even till the crop be three inches high. There is the greater reason for this precaution, because much rain immediately after rolling is apt to cake the surface when drought follows. Oats in a light soil may be rolled immediately after the seed is sown, unless the ground be so wet as to cling to the roller. In a clay soil, delay rolling till the grain be above ground. The proper time for growing grass-seeds in an oat-field, is when the grain is three inches high and rolling should immediately succeed whatever the soil be. Flax ought to be rolled immediately after sowing. This should never be neglected; for it makes the seed push equally, and prevents after growth, the bad effect of which is visible in every step of the process for dressing flax. The first year’s crop of sown grasses ought to be rolled as early the next spring as the ground will bear the horses. It fixes all the roots precisely as in the case of wheat. Rolling the second and third crops in loose soil, is an useful work; though not so essential as rolling the first crop.

The effects of rolling properly used, are substantial. In the first place, it renders a loose soil more compact and solid; which encourages the growth of plants, by making the earth clap close to every part of every root. Nor need we be afraid of rendering the soil too compact; for no roller that can be drawn by two or four horses will have that effect. In the next place, rolling keeps in the moisture, and hinders drought to penetrate. This effect is of great moment. In a dry season, it may make the difference of a good crop, or no crop, especially where the soil is light. In the third place, the rolling grass-seeds, beside the foregoing advantages, facilitates the mowing for hay. And it is to be hoped, that the advantage of this practice will lead farmers to mow their corn also, which will increase the quantity of straw, both for food and for the dunghill.

There is a small roller for breaking clods in land intended for barley. The common way is to break clods with a mell, which requires many hands, and is laborious work. This roller performs the work more effectually, and at much less expence; let a harrowing precede, which will break the clods a little; and after lying a day or a day and a half to dry, this roller will dissolve them into powder. This however does not supersede the use of the great roller after all the other articles are finished, in order to make the soil compact, and to keep out the summer drought. A stone roller feet long, and fifteen inches diameter, drawn by one horse, is sufficient to break clods that are easily dissolved by pressure. The use of this roller in preparing ground for barley is gaining ground daily, even among ordinary tenants, who have become sensible both of the expense and toil of using mells. But in a clay soil, the clods are sometimes too firm, or too tough, to be subdued by so light a machine. In that case, a roller of the same size, but of a different construction, is necessary. It ought to be surrounded with circles of iron, six inches asunder, and seven inches deep; which will cut even the most stubborn clods, and reduce them to powder. Let not this instrument be considered as a finical refinement. In a stiff clay, it may make the different of a plentiful or scanty crop.”

What do you think of Kaimes’ advice on the roller in 1796?