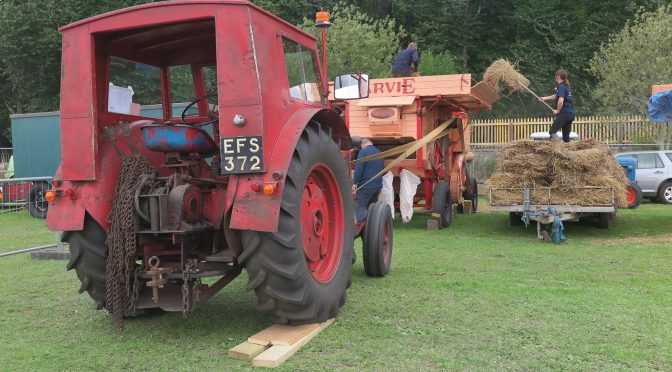 In 1810 George Robertson wrote the General View of the Agriculture of the County of Kincardineshire. It includes a detailed account of the threshing mills used in the county. It is one of the few accounts that provides detailed technical information on mills at this time. George Robertson writes:

“The invention of the mode of threshing corn by machinery is but of recent date; at least the successful application of it to business is confined to modern times. The first threshing mill that was erected in Mid Lothian was by the late Mr Francis Trellis, an Hungarian, about the year 1785 or 1786. Before that time there were not above two or three of them in Scotland, where they were first brought into use, and where they are more generally employed still, than in South Britain.
At what time threshing mills were introduced into Kincardineshire, I have not been able to find out precisely. But it was not long till they were erected in this county after they were invented. At farthest this took place about the year 1795, within ten years of the time that they were first used in the more southern counties. They are now however getting into very general use in all the larger farms; to which, from the great expense of erection, and the great power required to put them in motion, the application seems to be limited.
To bring down these machines to the level of the lesser class of farms, frequent attempts have been made to adapt them to the power of one horse. But none that I have heard of have fully succeeded, nor indeed any under a four horse draught. With that number they perform to admiration. And when a greater number, as six or eight, is applied, the effect is proportionally greater. But these last would be more adapted to the purpose of a parish than a single farm.

In this county there are a few threshing mills that are put in motion by water; and wherever this element can be applied then answer well. There are none driven by steam; though steam engines have everything to recommend them for the purpose, but the expense. Neither are there any that are driven by the wind. Mills of this description might be cheaper in point of cost; but the uncertainty of going, to which they would be liable, is a great drawback attending them. Nor have I heard of any that are wrought by one, or by two horses. The greater number are drawn by four or more horses or oxen in each; and of course are upon a scale of expense of from £140 to £180. Thus the use of threshing machines, though extending yearly, has not yet descended to the moderate means and necessities of the inferior order of farmers, the most numerous class in the shire.
As this powerful and useful machine has certainly not yet arrived to such a point of perfection as to adapt it to general use, I shall here insert the comparative dimensions of two mills, on a four or six horse power; from which, perhaps some inventive genius may be able to strike out some improvement, so as to reduce, if possible, the expence of erecting, and the force required for impulsion.
The powers of the threshing machine do not seem to require to be augumented. For either of the mills here to be taken notice of, thresh easily, when put to the full stretch, from eight to ten bolls of wheat or oats, in an hour; more surely is not required on any farm.

Here it may be observed, that the velocity of No. 2 is considerably less than that of No. 1-Yet in point of execution, as ascertained from experience, it is fully as effective. Hence it may be inferred, that, as velocity may be diminished to a certain extent without detriment to the efficient force, these machines may be so constructed as to have less velocity than is at present through necessity; and this be kept in due motion with a less degree of impelling power. Instead of requiring either 61 feet or 55 of velocity per second as in the preceding examples it may perhaps be fully sufficient for the purpose, to have a velocity of only 45 or 40.
This opinion is founded on what I have observed in a threshing mill belonging to Mr Driver at Maryton, in the vicinity of Montrose. In this mill, which is put in motion by water, the following are the circumstances.

Farther, the stream of water which gives motion to this mill, when confined to the mill-led, is twenty-one inches broad and four inches deep, running on nearly a dead level. The water therefore operates on the wheel, not by its velocity, but by its weight. It may be of some importance to enquire, to what this weight may amount.
It is already mentioned that it is an overshot wheel. The water enters upon iyt about two and a half feet from the perpendicular. But it can have little effect in imparting motion till it reaches as far as over as to take the wheel at an angle of 45 from the horizon. This is on a wheel of 16 feet diameter will be at two thirds of eight feet (the semidiameter) from the centre, or 32 inches inwards from the utmost prolongation of the arms. As the water begins only to have full effect on the wheel at the angle of 45 above the horizon, or centre of the wheel; so it will continue to operate no longer upon it with force than till it reaches to 45 degrees below the horizon or centre. Hence its whole effective range will be 90 degrees, or one quarter of the wheel; and as this will be all contained in the course of 32 inches inwards from the extremity of the wheel, hence the quantity of water altogether, will be equal to 32x21x4 inches, or equal to 2688 cubic inches. Now, as a Scotch pint contains about 103 cubic inches, hence there will be about 26 Scotch pints of water operating at once upon the wheel. And as each pint is ascertained to be 3.7lb weight avoirdupois, of course the whole weight required, will be about 96lbs or six stones weight. This, being ascertained, may lead to more important consequences than merely gratifying curiosity. For, from this it may be inferred, that when such a small original moving power is sufficient for the purpose (and it is not more than two thirds of the power of one horse) some mode may be invented in the draught of those mills put in motion by horses, to make an equally small power produce the effect, instead of employing, as at present, four, six, or eight horses, for the purpose.
It may be remarked before quitting this subject of implements, that fanners for cleansing corn have been long used in this county. They now cost about £4, and where threshing machines are used, they are very generally attached to them.”

The photos were taken at The Deeside vintage rally, August 2018.