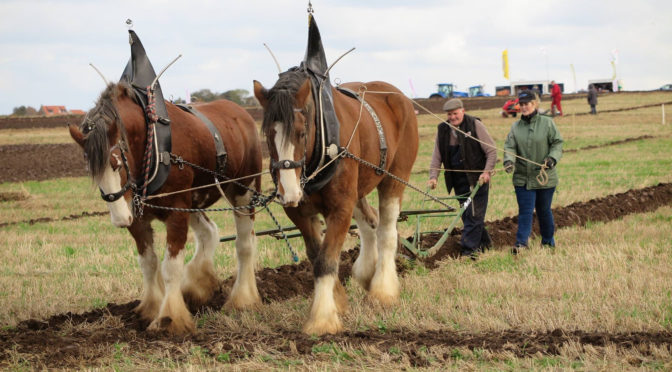 The later decades of the eighteenth century brought significant changes in ploughs and ploughing in Scotland.
The old Scots plough started to be replaced by the lighter “Small plough”. Teams of oxen started to be replaced by pairs of horses. A small number of foundries started to emerge to make these “modern” ploughs. Older ploughs, made of wood, continued to be manufactured, some wooden ploughs till being found into the twentieth century.

The late eighteenth and early nineteenth century agricultural writers sometimes commented at great length on ploughs, as one of the key implements on the farm. One of them was the great Sir John Sinclair. Writing in An account of the systems of husbandry in the more improved districts of Scotland, he provides an overview of ploughs and ploughing:

“Ploughs-Ploughs with wheels are in general too complicated, and their weight so great, as to require an additional horse, or pair of oxen, to pull them along. In Scotland, the swing plough is almost universally adopted, and rarely more than two horses are now made use of. The horses also are yoked a-breast, by which the advantage of their full strength can best be obtained, animal power being most advantageously exerted, when employed separately, and close to the work. Indeed, when horses are yoked one before the other or harnessed at length, it is hardly possible that they can pull equally. The power of the fore horses must be exerted, to reduce the traces to a straight line, which cannot be done without pressing on the back of the hindmost horse, where the angle is formed, and consequently greatly distressing him: hence the superiority of ploughs drawn by two horses a-breast, and of single-horse carts. In regard to the operation of ploughing, also, it is to be observed, that less time is lost in turning, more especially in small fields, insomuch that with equal ease, two horses a-breast will do at least one-tenth more work, that the same horses will perform when placed in a line.

The plough generally used in Scotland, is known under the name of Small’s plough. But in some of the western counties, as in Ayrshire, Renfrewshire, and Clydesdale, a plough made by Mr Wilkie of Uddingston is very common, and much approved of. The same artist has lately introduduced an iron plough. In the neighbourhood of Jedburgh, Veitch’s construction is justly celebrated, though the sources whence its merits are derived are disputed. But as James Small is the artist to whom hitherto Scotland has been most indebted, I propose, in the Appendix, to explain the origin, nature and advantages of his improvements (see https://archive.org/stream/accountofsystems00sinc…)

The ploughs in Scotland are now almost universally worked by horses; but some intelligent farmers on the borders, think it is advantage to have some ploughs worked by oxen also, as they are not so high priced, and more cheaply maintained; they are of opinion, therefore, that any extraordinary stock, not constantly required, should be of that description.
For clearing green crops, a double plough, which takes a furrow from each side of the row, is reckoned to be a great improvement, and if properly used, renders the mould as fine as that of a garden.

In general, the horses are yoked a-breast, and never in a line, excepting to take up the last furrow in a wet wheat seed-time, to prevent poaching.

In some parts of Scotland, it is necessary to have strong ploughs, calculated for breaking up marshy ground, or old ley, where furze perhaps may abound, and, in such cases, four horses are necessary; and farmers make it a rule to have a spare plough or two, so that the horses may not be kept idle, in case one of the ploughs should accidentally break.”

The photographs of the horse ploughs were taken at the Scottish Ploughing Championships, West Fenton, October 2016.