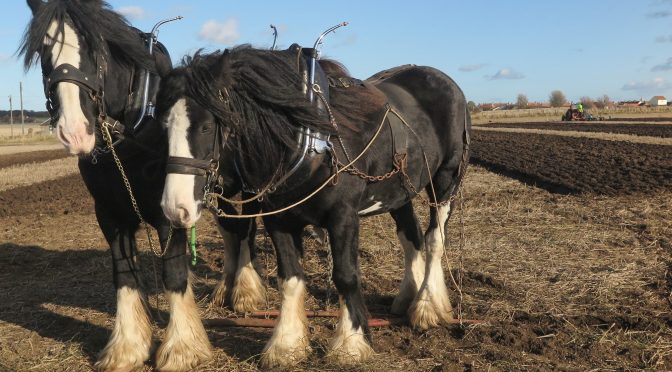 John Thomson in his General View of the Agriculture of the County of Fife, published in 1800, provides an interesting account of ploughs and ploughing. It shows the diversity of ploughs used in the county:

“The old Scots plough is now almost entirely gone into disuse, and its place supplied by a small light plough, usually with an iron head and a cast mettle mould-board, constructed on such principles as to require less power to draw it, and to perform the work with greater exactness and perfection. Few ploughs, constructed entirely according to the form of Mr Small’s are used in this county. They are thought not to answer well, and therefore not in general estimation. This, however, may be owing, not to any defect in the form of the plough, when properly made, but to the want of skill in our mechanics, who may not be able to execute the work with sufficient exactness.

The plough most commonly in use has no chain; the sheath is of wood, and without curvature; and the mould-board, instead of being hollow, is round. The beam, though sufficiently low behind, is formed with such a curvature as to bring the bridge down to the proper line of draught, and is frequently strengthened with a plate of iron planted on each side, and extending the whole length; or, in place of these, with a plate of iron on the lower side. The part where the coulter passes through it, is fortified with a piece of iron above and below. But a great part of this iron work is unnecessary, as the beam seldom gives way, except at the coulter or sheath; and therefore, if properly secured at these points, there will be little danger of failure.

The hollow mould-board is certainly best for opening up stiff ground, and for ploughing ley, strong clay, or such land as admits of a clean furrow. But when the mould is loose, wet, and apt to fasten to the plough, the round mould-board seems to be prefereable, as it clears itself more easily of the earth, and makes the furrow master.”

The photographs were taken at the Scottish Ploughing Championships, October 2019.