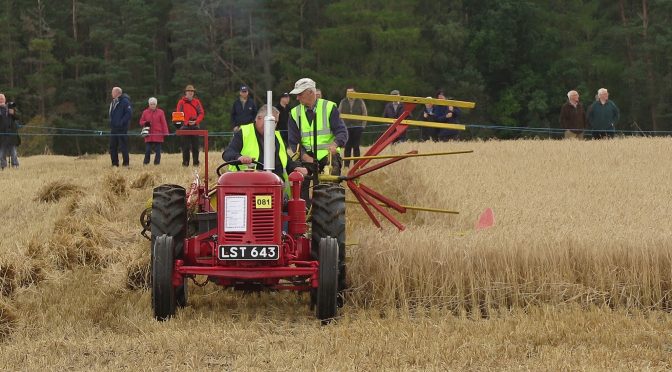 In Scotland, a number of early developments were made by Scottish innovators who identified the need for a machine and developed a number of early ones. They included Gladstones of Castle Douglas, Alexander Scott of Ormiston, Mr Smith of Deanston, and A. Kerr of Edinburgh. The Rev Patrick Bell of Carmyllie, had an ‘outstanding pioneer machine’ which included many features that ‘are still to be found in the modern reaper-binder, and some in the combine’. Following the success of its exhibition to the Royal Highland and Agricultural Society of Scotland in 1828 and 1829, ‘quite a number of machines [some 12 or 18] were made in different parts of the country by “mechanics of various kinds, common wrights, blacksmiths and millwrights”’. Bell’s machine was the ‘only one of the machines made before 1830 which continued to be used until reaping machines became established after the Great Exhibition of 1851’. After it was manufactured commercially on a wider scale by William Crosskill of Beverley, Yorkshire, it ‘held its own for a few years against the American imports in reaping competitions held up and down the country’.

However, by the early 1850s there was still a limited demand for reaping machines in Scotland. In 1851 there were no advertisements for them in the national Scottish agricultural newspaper, the North British Agriculturist. In 1852, 1854, 1855 and 1856 that newspaper only included advertisements from one manufacturer of reapers each year: William Crosskill of Beverley advertised Hussey’s American reaper in 1852 and Bell’s prize reaper in 1854 and 1856; W. Dray & Co., London, advertised his improved patent Hussey reaper in 1855.

The 1860s and 1870s were important decades for their development and also for their adoption and diffusion throughout Scotland. That adoption and diffusion through time, geographically across all parts of the country, and by different groups of farmers and other agriculturists, can be seen in a number of county agricultural surveys commissioned as prize essays by the Royal Highland and Agricultural Society of Scotland. By 1861 in Berwickshire and Roxburghshire, the reaper was ‘now used in a great many farms’ and it was ‘not uncommon to see two or more reapers on one farm’. However, in these counties a ‘considerable breadth’ continued to be cut with the sickle. In Ayrshire for the 1861 harvest, ‘reaping machines were pretty general in all the larger farms’. By 1866, they had been adopted in increasing numbers so that ‘almost every farm of 100 acres and upwards, has at least one of these whirring cheerily along’. By the late 1860s ‘their value as labour-saving machines is becoming better understood’. A number of manufacturers, advertising in the Scottish agricultural press in the late 1860s noted the significant demand for machines and the need to ensure that orders for machines were submitted as far in advance of the harvest as possible.

They continued to be adopted in increasing numbers in the 1870s. In 1870 in Aberdeenshire and Banffshire they were ‘becoming equally common’. In 1872 in Inverness-shire, ‘in the more favoured localities reaping machines have all but superseded the scythe. There is scarcely a farm in the neighbourhood of Inverness but sports its reaper.’ In Caithness in 1875 ‘there is perhaps no county north of Perth in which the reaper is more exclusively employed in mowing the grain’. In Fife in 1876 ‘the crop may be said to be entirely reaped by machines’. However, they were not universally employed by all farmers, and there were still differences in their use between Highland and Lowland areas and between larger and smaller farms. In Ross and Cromarty in 1877 ‘on all of the larger farms and on many of the smaller holdings, reapers are used, while in some cases three or four crofters club together, and purchase a reaper’. In Midlothian and West Lothian, in 1877, ‘cutting is now mostly done by the reaping machine, although on very small farms, and in exceptional cases upon larger, the scythe is still used’.

By the 1880s accounts report their widescale and also their universal use, even in counties that were not leading agricultural ones. In 1880 in Sutherland, ‘reapers and mowers are now employed on all farms’. In Forfar and Kincardineshire in 1881 ‘cutting is almost wholly performed by reapers’. Two years later, in Clackmannanshire and Kinross, ‘the grain is all cut with reaping machines, and the hay with mowers’. In 1885 in Lanarkshire, reapers ‘are almost universal’, and in Wigtownshire they ‘are now almost universally used for cutting the grain’. In Selkirk in the following year they were ‘extensively used especially in the lower districts of the country’. In 1887 in Renfrew they had ‘to a large extent superseded the scythe’. By 1890 Henry Stephens could observe that ‘in all parts of the United Kingdom, and on almost all farms of any considerable size, the reaping-machine has superseded the slower and older appliances for cutting down the corn crops’.

A number of significant developments started to take place in the industry during the early 1870s that were to have an important impact on the sale of reapers. The first large-scale agents who sold implements and machines for a number of manufacturers started to emerge in centres of population such as Glasgow and Edinburgh, and in regional centres such as Ayr and Kelso. Some of them, however, were short-lived, trading for only one or two years. Nevertheless, their emergence and then their expansion enabled implements and machines from a wider range of manufacturers, and from other geographical areas, including England, America and Canada, to be sold to and used by Scottish farmers. Conversely, it allowed manufacturers from these other areas to extend their businesses and to supply new markets in Scotland. By the 1890s these agents had increased steadily, and some well-established ones not only served a region, but also Scotland as a whole. By this time other important developments had taken place. A number of manufacturers of regional and also national standing had emerged; some of the most important of these were also extensive exporters of their own implements and machines over the British Empire and beyond. Some of the manufacturers also started to act as agents for other manufacturers, so that they could meet a demand for new technologies and ensure that they were available, especially where they did not have the facilities or the skills to manufacture them themselves.

The photographs were taken at Strathnairn really, September 2017 and 2018.