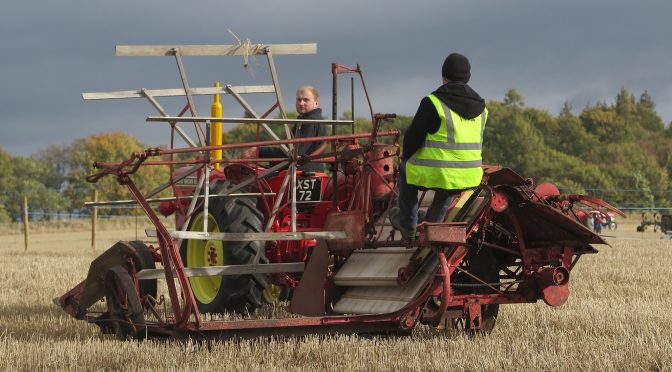 From the late 1850s until 1910 a number of important technological changes took place to the machines to harvest the grain crop. In 1858 two types of machines were available: (1) the combined reaper and mower which cut the crop and gathered it into sheaves, and (2) the reaping machine which turned the sheaves off by the hand rake. Both were classified according to the way they delivered the sheaves, whether by hand (manual delivery) or mechanical means (self-delivery, or self-reaping), and according to the place where they were delivered – at the side of the machine (side delivery) or at its back (back delivery).

The earliest reapers, such as Bell’s, were side delivery, and the sheaves had to be taken manually from the machine – manual delivery; they were manual side delivery reapers. Mechanical or self-delivery machines were developed in the late 1850s. In the 1860s there were a number of significant technological developments. Importantly, ‘mechanical side delivery machines began to supersede the original manual delivery models’. That development was a significant one. Writing on the trials of reapers at the Royal Show in 1865, G. E. Fussell notes that ‘the inferiority of manual to mechanical side delivery [machines] was very apparent’. The self-raker, which had a rake arm that raked the cut grain off the platform, was also developed; the Dorsey type of self-raker was to remain ‘the standard type for at least thirty years’. Another significant development was the back-delivery reaper.

The early 1870s saw a further important development, that of the reaper-binder which cut, elevated, bound the crop into sheaves and delivered the crop. At first, the sheaves were bound by wire, but in 1878 the string-tying self-binder was developed by the McCormick Harvesting Machine Company. Further detailed improvements took place, and ‘by the 1890s the reaper binder was stabilized in its general principles’. During that decade, ‘it was clear that self-binders had come to stay’: Henry Stephens called it ‘one of the most useful agricultural inventions of the nineteenth-century’.

There were significant differences between these different harvesting technologies. Manual delivery reapers involved ‘severe and incessant labour on the part of the attendant’, whereas self-delivery ones did not, having mechanized the work in delivering the sheaf. The difference between side-delivery and back-delivery reapers was especially important for Scottish farmers and other agriculturists. When a field was cut with a side delivery reaper, the sheaves were laid to the side of the machine, and permitted a whole field to be cut without any sheaves being bound. With a back delivery reaper, the sheaves had to be bound as the field was cut.

The photographs were taken at Strathnairn rally, September 2018.