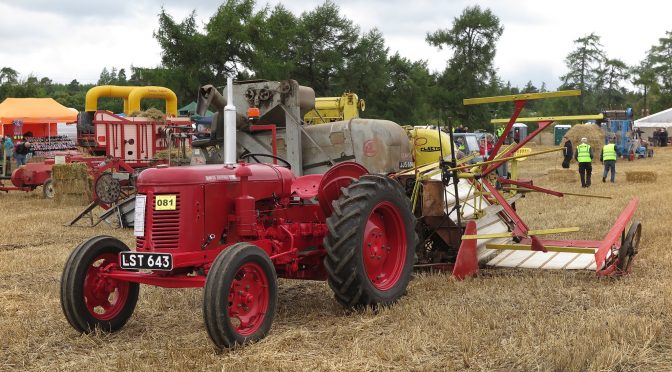 The Scottish and English exhibitors had their own roles to play within these different grain harvesting technologies. Both groups of exhibitors displayed a number of types of machines each year, except when new types of machines were first exhibited, or older technologies had been largely superseded by new ones. Reapers from English manufacturers dominated the exhibition of harvesting machines especially after 1871 and until the mid 1880s when they formed the largest percentage of exhibits: in 1880 they were brought forward by 38 English manufacturers and 3 Scottish ones. However, the number of English machines declined after 1885, but increased again in 1893 and 1894, thereafter diminishing significantly. From 1885 the number of Scottish-made reapers fluctuated greatly until 1901, though they did not decline to the same extent as the English-made ones. After 1901 the number of Scottish machines declined and in 1906, 1907 and 1910, none were displayed. At 11 shows there were more Scottish-made reapers than English ones.

The Scottish and English manufacturers each had their own roles in the exhibition of the combined reaper and mower. Scottish-made combined reaper and mowers were exhibited in larger numbers than English ones until the mid 1860s. Thereafter English machines formed more than half of the exhibits in each year until 1881, though this trend was reversed until 1908. Their number declined especially after 1900, when the combined reaper and mower was replaced by other harvesting technologies. Scottish manufacturers therefore played a more significant role in their exhibition during the period of this survey. At 28 shows there were more Scottish-made mowers and reapers than English ones.

The Scottish exhibitors, however, played a small role in the exhibition of binders from 1882 onwards. In only one year, 1899, did they exhibit more than 11 machines from a Scottish manufacturer and in only two years – 1887 and 1890 – were there a larger number of Scottish exhibits than English ones, though only a handful of machines were exhibited in that year. These machines also came from one manufacturer – the only Scottish manufacturer of the binder: J. Bisset & Sons, Blairgowrie, which first exhibited their binder at the Show in 1887; it continued to be marketed as the only binder ‘entirely manufactured in Scotland’.

Binders from English manufacturers became especially important in 1885 and 1886 and again after 1894, when their numbers increased quickly until 1900, though they fell sharply after 1900, and did not regain the numbers of the late 1890s. The majority of binders were not English machines but were American and Canadian ones which played an increasing role in the showground from 1884 and from the mid 1890s they came to dominate the exhibition of binders and were exhibited in large numbers. As Henry Stephens noted in 1908 ‘the manufacture of combined reapers and binders is now carried on extensively by many eminent firms – Canadian and American machines competing strongly against British-made ones in our own country’.

The photographs were taken at Strathnairn Rally, September 2018.