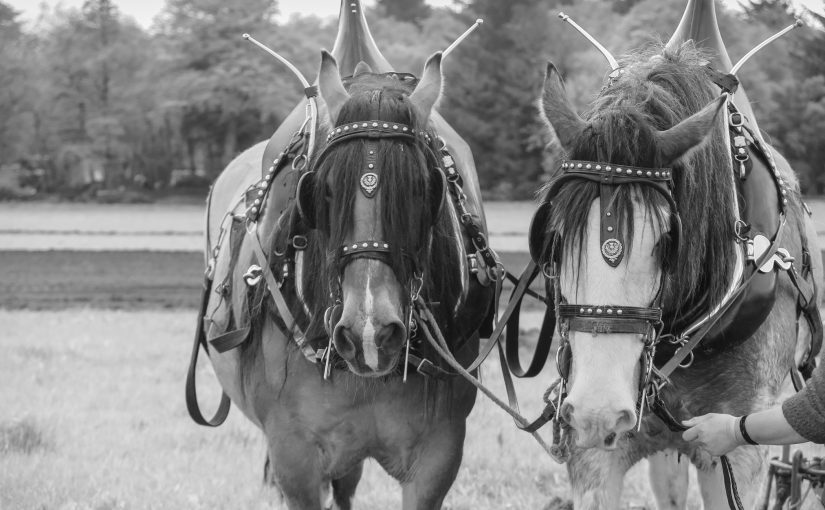 From the mid nineteenth century a number of champion ploughing matches were held in Scotland. These were especially noted in the north-east. They were open to ploughmen who had won awards at earlier matches – hence the matches were matches of champions pitting their skills against one another.

By the early 1900s some of these matches were large affairs and were well-attended. The Lower Deeside Champion Ploughing Match was set up in 1910 and continued for a number of decades. It was a large match, with competitors sometimes coming from far afield to compete against well-known ploughmen, to produce high-quality ploughing. Accounts of the match were usually printed in the Aberdeen Press and Journal.

Accounts from the mid 1930s show what the match was like, how it was organised, classes, the prizewinners and other details (such as weather conditions).

The 1935 match (Aberdeen press and journal, 18 February 1835)
Stocial powers of endurance were displayed by the competitors at the annual Deeside champion ploughing match, which was held in a field on the farm of Mill of Wester Coull, near Aboyne, on Saturday.
Throughout the day steady rain, lashed by a bitterly cold wind, chilled the thirty-eight competitors through and through, but they stuck to their task and, despite the conditions, some splendid ploughing was witnessed by the handful of spectators who had the courage to brave the elements.
In the vicinity of the officials’ tent the ground was literally a quagmire.
Nevertheless the enthusiasm of officials and competitors was unquenchable and was a tribute to that hardiness and dour determination which have always been characteristic of the Scots worker on the land. Many known “crack” ploughmen competed, and with a good, level field on which to work they turned some remarkably fine rigs.
The championship cup was won by Robert Allan, Echt, who has had numerous successes in competitive ploughing throughout the North-East.
The outstanding feature of the match, however, was the success of Jas. Merchant, Dubston, Finzean, who carried off no fewer than nine prizes, including the ninth prize for actual ploughing.
At the close of the competition the prizes were presented by Mr C. M. Barclay-Harvey, MP, who was introduced by Mr J. R. McCaw, Douneside. Mr R. R. Anderosn, Milton, Auchinhove, proposed votes of thanks to the judges, the committee, the donor of the field, Mr Wm McConnachie, and the donors of the prizes.
The arrangements were in the capable hands of Mr A. Middleton, East Mains, Aboyne, along with a committee, and Mr and Mrs McCallum, Aberdeen Arms Hotel, were responsible for the catering.
The judges were-ploughing-Messrs Jas. Allan, Begsley, Kinaldie; Wm Brown, Lauchintilly, Dunecht; and Wm Reid, Kintore Arms. Horse and harness-Jas Burnett, West Cults.

1936 match (Aberdeen press and journal, 3 February 1936)
The twenty-sixth annual Lower Deeside champion ploughing match, which had to be postponed on account of unsuitable weather, was held on Saturday at Inchgarth Farm, Cults, near Aberdeen.
The field was granted by Mr George Taylor. The match was late in starting on account of the frost and the committee deferred coming to a decision for an hour. The prospect of a fine day at length prompted them to proceed. The original entries, owing to the unsettled weather, showed a decrease of about a dozen from last year, and numbered twenty-eight.
After having raised their feerings, five competitors retired as it was found that in addition to the surface frost of that morning there still existed a band of the original frost about three inches down in some of the ridges where there was not much foggage.
The committee had salted parts of the field the day before but this had not any effect on the underground frost. Much good work was nevertheless done by those who completed their task in face of the difficulties.
The efforts of Mr C. Reid, Bankhead of Monboddo, Auchenblae, were specially good, He carried off first prize for ploughing, for feering, for finish, and for feering and finish combined. This competitor whilst in Slains was a well-known prize-winner in the Buchan district. The judges were Messrs James Peters, Backhill of Dunecht; George Oliphant, Fingask, Mintlaw, and William Beverley, Haughton Arms, Alford. The arrangements of the committee, in the perplexing circumstances, were well carried out with Mr Joseph Monro, Aberdeen, as chairman; Mr C. Miller, Aberdeen, as secretary, and Mr Alexander Gibson as treasurer. Mr Donald Henderson was time-keeper.