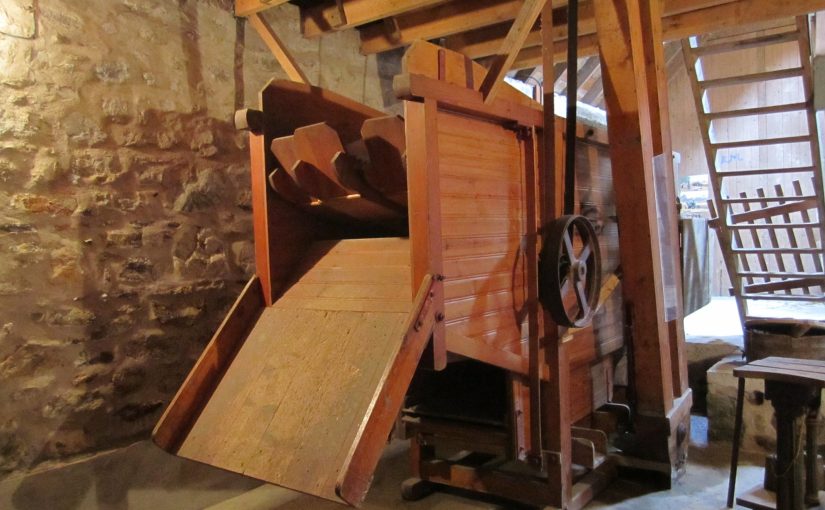 By the mid nineteenth century when Scotland was being intensively mapped by the Ordnance Survey, its surveyors were out and about on the land, visiting farms and other settlements, recording the names of every building and feature. In their accounts a number of the surveyors refer to the presence of thrashing mills as part of the farm steadings.

Their evidence can be used to gain a better idea of the distribution and presence of steam (and water driven) threshing machines at farms. Some parts of Scotland had numerous steam threshing machines erected at the farm steadings.

In West Lothian, these were largely found in the coastal parishes such as Abercorn, Dalmeny, as well as Kirkliston and Linlithgow. The OS name book entries are interesting for the information they reveal about the farms on which they were erected, the state of the farm steadings, information on the owner, and sometimes the size of the farm. In a few cases there is some information about the actual mill, including its size and horse power. For example, at Easter Dalmeny, Dalmeny the mill was “very fine portable one of eight horse power”.

The following are the farms on which steam threshing mills were found in West Lothian, according to the OS name books:

Wester Duntarvie, Abercorn – this is a large farm steading with dwelling house of two storeys and garden; the thrashing machine is driven by steam. Mr James Bartholemew, farmer, is the tenant and the Earl of Hopetoun is the proprietor.
Echline, Dalmeny – A good dwelling house two stories high and slates, with extensive farm offices, and a thrashing mill worked by steam, attached-also a row of cottages occupied by hinds. There is a good garden, and a lathe arable farm also attached. It is the property of James Dundas esq of Dundas Castle. And in the occupation of George Thomson.
Easter Dalmeny, Dalmeny – A large farmstead consisting of an excellent swelling house two stories high & slated. Attached to it are extensive outbuildings with a thrashing mill worked by steam, the engine is a very fine portable one of eight horse power. There is a small portion of ornamental ground & garden attached to the dwelling. The farm consists of 230 acres & is the property of Lord Roseberry.
Westfield, Dalmeny – A good farm house with suitable offices including thrashing mill worked by steam power, also a row of cottages occupied by farm servants, a garden and a good arable farm attached. Occupied by Mr Stevenson. The property of James Dundas esq of Dundas Castle.

Gateside, Linlithgow – A large and commodious dwelling house two storeys high, in good repair and slated, with extensive farm offices, including a thrashing mill worked by steam and three rows of cottages of an inferior description attached. It is the property of the Earl of Hopetoun and in the occupation of Mr W. Wilson.
Oatridge, Linlithgow – A good dwelling house two storeys high and slated with a court of farm offices including a thrashing mill worked by steam, a good garden and an extensive arable farm attached and is part of the Binny Estate.
Blackfaulds – This name applies to a large and commodious farm house or mansion house two storeys high with suitable offices including thrashing machine propelled by steam power all in good repair. There is a large harden attached, with a good farm of arable land. The property & residence of William Blackhall esqr.

Gowanbank, Torphichen – A large and commodious farm house, three storeys high, with suitable offices, and a thrashing machine, propelled by steam, all in very excellent repair. There is a large garden, a small portion of ornamental ground, and about a hundred acres of arable land attached. Proprietor and occupier Mr Gowan.
Stankards, Uphall – A large farmstead. The dwelling house is only one storey high and slated with a. garden in rear. The outbuildings are large & extensive, having a thrashing mill attached, worked by steam; the whole is in. good repair – the occupier is Mr James Ford holding a farm of 196 acres Scotch. It is the property of the Earl of Buchan, Amondell.