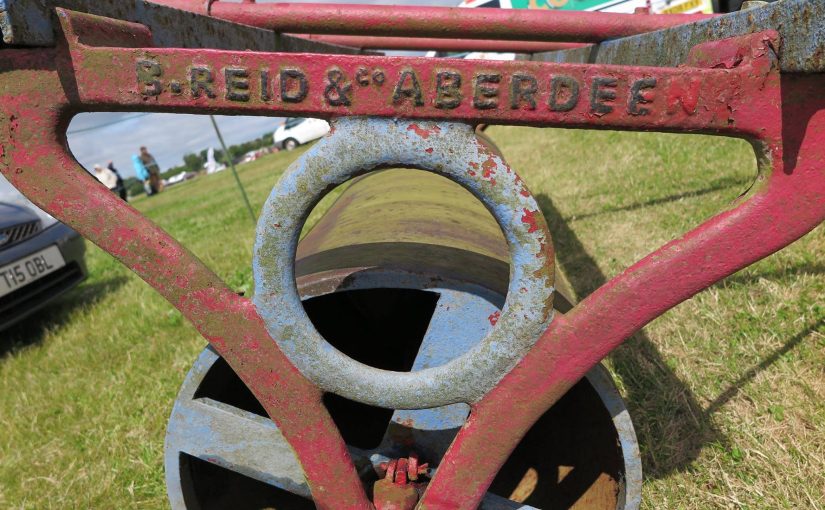 In 1890 Ben Reid & Co., Aberdeen, opened a new premises in Aberdeen to enable it to grow its business and to undertake its work more efficiently and effectively. The North British Agriculturist sent one of its journalists to visit the new factory. It is worth quoting at length for the amount of information it provides on the company and its activities:

“We had the pleasure of recently inspecting the famous Bon Accord Implement Works of the Messrs Ben Reid & Co., Aberdeen. This well-known firm, whose enterprise and excellence of workmanship have made the Bon Accord implements known and highly prized not only in this country, but wherever there are crops to be sown and harvests to be reaped, has for many years consisted solely of two gentlemen-Mr William Anderson and Mr Robert Garvie. The former gentleman is invariably found at the head of the firm’s stand at every agricultural gathering of any consequence in the three kingdoms; while the latter is found with equal regularity at the head of that garrison of industry, where the implements are produced by which the conquests of the firm are year by year extended. Mr William Anderson is the beau ideal of the implement exhibitor, as he is fully equipped not only with the suaviter in modo, but also with the fortiter in re. His naturally genial disposition is mated with a robust confidence in the dignity of his calling, and the very important use which the implement maker renders to the agricultural community. He pushes the sale of his goods on the invulnerable principle of giving good value for a good price; and the cheap-jack who wants to beat down the price, and buy first-class implements at the current rate for scamped work, invariably gets short shrift at his hands. He has always stood boldly out for the exhibitors of implements receiving more generous recognition from the leading agricultural societies than they have hitherto had, and his efforts in this way have been rewarded with considerable success. It is not surprising, therefore, that even his keenest competitors in the same line of business should have united, as one man, to honour him by appointing him president of the Society of Scottish Engineers, a position which he has held for the last three years. His partner, Mr Garvie, is not so well known to the outside public, on account of his sticking so closely to the factory work; but by all who have the pleasure of his acquaintance he is justly esteemed as a high-souled knight of labour, whose ‘scutcheon is graved with numerous honours won on the field of engineering science.

The praise occupied by this firm are splendidly equipped, though by no means so extensive as one would have expected considering the amount of manufactured goods which are turned out every year, and the quantity of timber that has to be stored in order to be thoroughly well dried and seasoned. This apparent deficiency of accommodation, however, is due to the fact that machinery specially designed and specially constructed is here used to a quite unusual extent for the manufacture of the reapers, seed drills, &c. Just as in the latest product of dairy science, the Instantaneous Butte Maker, the new milk us fed in at the one-end and butter-milk come out at the other, or, as in the case of the fabled pig-dressing machines in Chicago, where the pigs are put in at the one end, and the hams, sausages, and bristles done up into brushes come out at the other, so here the wood and steel are fed into the machines and come out, not finished reapers or mowers certainly, but parts which are executed with the nicest mathematical precision, and only require putting together to complete the Bon Accord product. Most of these manufacturing machines, whose use saves time and labour to such an extent, and also ensures that each and every part shall be the exact counterpart of another, have been conceived and produced in the brain of either Mr Anderson or Mr Garvie. The greatest care is taken to ensure that none but wood and steel or iron of the very best quality shall be fed into these manufacturing machines, which, automatically as it were, turn out all the separate parts of the machines produced at the Bon Accord Works. The Bon Accord reapers and mowers, seed drills, and broadcast sowing machines produced by this firm are too well and favourably known to require description outside the Dark Continent. So, too, is their sharpener for reaping-machine blades, which is now justly regarded as an indispensable requisite on every farm. Every scythesman knows how tiresome it is to cut with a blunted blade, but when there was only the old plan of using the file to fall back upon, the ploughman were only too apt, to forget that the cutting with a blunted reaper blade was heavy on the horses as upon the scythesman. By the way, in these days when everything must be brought up to date, it might be a good plan for some enterprising firm like that under notice to bring the Nineteenth Century Art up to date by depicting Old father Time with a self-binder and a chronometer, instead of such out of date appliances as a hook and an hour-glass.

In addition to the purely agricultural implements by which the firm has become so well known, a large business is also done at the Bon Accord works in the production of garden railings and gates. This branch of the business is also conducted in a most exhaustive way, and all kinds of railings and gates are produced, from the humble railing and wicket that encloses the garden of the cottage villa, up to the costly railing and gorgeous gates that form a fitting off-set for the mansion of the peer. So greatly has this part of the business at the Bon Accord works, that a skilled artist is constantly employed in producing and elaborating designs for such railings and gates.

The implement works of Messrs Reid & Co., are the only works of the kind in the Granite city. This is not surprising considering the standing which this firm have acquired in the implement trade. At the same time, the north-east of Scotland is far from being a preserve of theirs any more than the rest of the country is. Indeed, it is probable that their constituents are as numerous in any other part of Scotland as they are in Aberdeenshire, and their foreign trade is also a vast as well as a growing one. Altogether, it may be safely said, alike as regards the quantity and quality of the products turned out by this firm, and the unique position which the partners hold in the estimation of the agricultural public, the Bon Accord works are an institution of which the city of Bon Accord may be justly proud.”