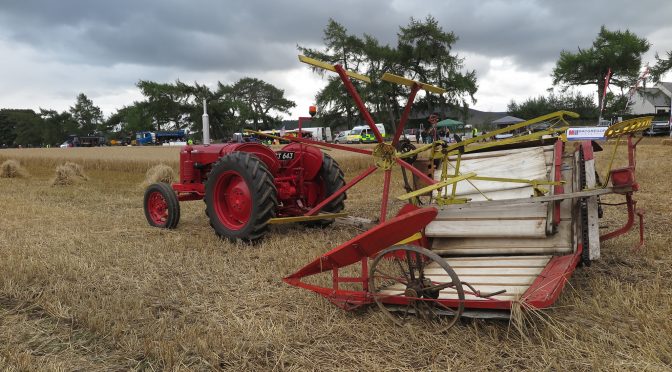 The mechanisation of the grain harvest transformed the way the crop was crop was cut and handled in the nineteenth century. Binders with self-knotting devices were to play an important role in harvesting the grain crop in Scotland until the arrival of the combine harvester and its gradual adoption and use.

There are a number of accounts of the invention and development of the reaping machine. An informative one is found in Henry Stephen’s The Book of the Farm of 1908. It is worth quoting at length:

“In all parts of the United Kingdom, and on all farms of any considerable size, the reaping-machine has superseded the slower and older appliances for cutting down the corn crops.
Although it did not come into extensive use until the middle of the nineteenth century, the reaping machine is by no means a modern invention, it is indeed much older than generally believed. It is known that before the advent of the nineteenth century several attempts had been made to devise a workable reaping-machine. No authentic information has come down to us as to the actual structure of these abortive machines.
But soon after the commencement of the nineteenth century, when agricultural improvements were making progress in every direction, and in particular by the extension of the use of improved machinery to the various branches of farming, active attention was successfully devoted to the invention of a reaping-machine. With the object of stimulating inventors, agricultural societies offered premiums, and we know that within the first twenty-five years of the century nearly a score of reaping-machines, less or more distinct in pattern, and invented by different men, were introduced into public notice in England and Scotland.

The principal of these machines were designed by Boyce, Plunket (London), Gladstone (1806, Castle Douglas), Salmon (Woburn), Smith (1812, Deanston), Scott (1815, Ormiston, East Lothian), Mann (1820, Raby, Cumberland), and Ogle and brown (1822, Alnwick).
It is believed that not one of the early reapers mentioned was ever worked throughout a harvest. Even Smith’s and Mann’s machines, which were the most perfect, do not appear to have been worked beyond a few hours consecutively. Their actual capabilities, therefore, seem never to have been properly tested.

Bell’s reaping machine- the year 1826 may be held as an era in the history of the reaping-machine, by the invention, and the perfecting as well, of the first really effective mechanical reaper. This invention is due to the Rev Patrick Bell, minister of the parish of Carmylie in Forfarshire.
The principle on which its cutting operation acts is that of a series of clipping shears. When the machine had been completed, Mr bell brought it before the Highland and Agricultural Society, who appointed a committee of its members to inspect its operation in the field, and to report. The trials and the report being favourable, the Society awarded the sum of £5 0 to Mr Bell for his invention, and a correct working-model of the machine was subsequently placed in the Society’s Museum-the model, on the closing of that Museum, having been deposited in what is now the Royal Scottish Museum, Chambers Street, Edinburgh. The invention shortly worked its way to a considerable extent in Forfarshire. In 1834 there were several machines which did their work in a very satisfactory manner. Dundee appears to have been the principal seat of their manufacture, and from thence they were sent to various parts of the country. It is known, also, that four of the machines were sent to the United States of America; and this circumstance renders it highly probable that they became the models from which te numerous so-called inventions of the American reapers have since sprung. At the great fair or exhibition held at New York in 1851, not fewer than six reapers were exhibited, all by different hands, and each claiming to be a special invention; yet, in all of them, the principal feature-the cutting apparatus-bears the strongest evidence of having been copied from Bell’s machine.

Construction-the machine was worked by two horses pushing it before them by means of the pole to which they were yoked by the common draught-bar.
In the process of working this machine, Mr Bell’s practice was to employ one man driving and conducting the machine; eight women to collect the corn into sheaves, and to make bands for these sheaves; four men to bind the sheaves, and two men to set the sheaves up in stooks-in all fourteen labourers, beside the driver and the horses. The work performed averaged 12 imperial acres per day. These data were obtained from fourteen years’ experience of the machine, and are therefore reliable.
The expense in money for reaping by this machine about 1835 averaged 3s 6d an acre, including the expense of food to the workers. This, in round numbers, was a saving of one-half the usual expense of reaping by hand, at the saving on a farm where there might be 100 acres of cereal and leguminous crop would do more than cover the price of a machine of the best quality in two years.

It is difficult to account for the fact that Bell’s machine was not more extensively adopted. For a period of nearly twenty years it was successively used; and yet, with practical agriculturists, it did not seem to gain so high a reputation as its American rivals-the machines of Hussey and McCormick. It did its work really well, but its draught was exceptionally heavy, and the delivery web was liable to become disordered.
Subsequent makers improved on bell’s machine, and now it exists only as the groundwork of the modern reaper.
The two machines which, perhaps, did most to popularlise the reaping-machine in this country were both introduced from America. These were known as Hussey’s and McCormick’s machines-Hussey’s being manufactured by Messrs Dray & Co., engineers, of Swan Lake, London Bridge, London; McCormick’s by Messrs Burgess & key, Newgate Street, London. These firms introduced great improvements in the machines which they respectively manufactured, so much so, that there would be some difficulty in recognizing in them the same machines, the appearance of which, at the Great Exhibition of 1851, created such an interest in the agricultural world.

Hussey’s Machine was improved by Messrs Dray. The cost of this machine was £25. McCormick’s reaping machine, with the improvements introduced by Messrs Burgess & Key, Newgate Street, London, the cutting apparatus and driving-gear presented features somewhat similar to those of Hussey’s machine. But while in Dray’s machine, the grain, after being cut, was delivered to a platform, the working of which required a special attendant, and the grain delivered to the ground in quantities sufficient to make a sheaf was required to be immediately bound up in order to clear the path for the return journey of the machine,-in Burgess & Key’s the cut grain was at once delivered to a screw platform, and passed to the ground at the side of the machine. A special attendant was therefore not required, and the grain, moreover, being delivered at the side, could be left till the whole could be conveniently bound up.
Modern reaping machines. From these small beginnings in the invention and manufacture of reaping-machines a great industry has sprung up, from which the agriculture of this country has derived benefits of inestimable value. The firms in the United Kingdom who manufacture reaping-machines are now numbered by the hundred, and the larger firms send out several thousand machines every year.
Many improvements have been introduced with the view to simplifying the construction, reducing the draught, lessening the cost, and increasing the efficiency and general usefulness of the machines.
The reaping-machine is now produced in many forms, less or more distinct, suited for different purposes and different conditions of soil and climate. There are the simple mower, adapted merely for mowing hay and leaving it lying as it is cut; the combined mower and reaper, which may be arranged not only to cut the crop, but also to gather it into sheaves or swathes; the back-delivery, the side-delivery, the self-delivery, and the reaper in which the sheaves are turned off by the hand-rake. And last, and greatest of all, comes the combined reaper and binder, which is now an established success, performing its intricate and difficult work in a most admirable manner.
The prices of the different reaping and mowing machines vary greatly, from £13 to £20, according to strength and other features. In recent years there has been a marked reduction in price, and this, accompanied by increased efficiency, has given a great impetus to the employment of machines in cutting the hay and corn crops. The combined reaper and binder costs from £25 to £35.
The work accomplished by the leading reapers and mowers is now as nearly perfect as might be. Unless the crop is very seriously laid and twisted, the improved machine will pick it up and cut it from the ground in the most regular and tidy manner, leaving a short even stubble. Now and again a corn crop is laid and twisted by a storm so as to defeat the reaping-machine; but the possibilities of the modern machine are indeed wonderful.”

The photographs of the binders at work were taken at the Strathnairn Vintage Rally, September 2018.