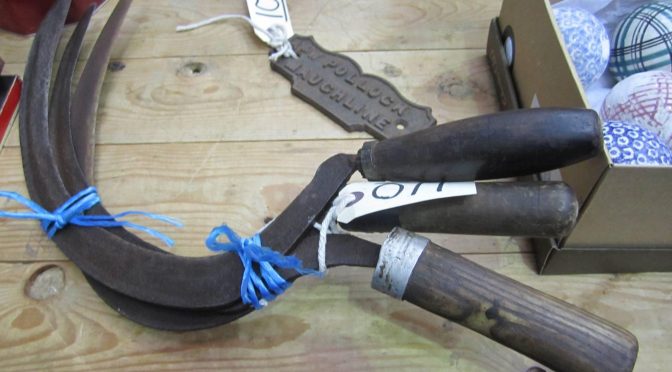 It is hard to believe that in the mid nineteenth century hand tools were most commonly used to cut the grain crop. The sickle was an ancient tool that was the precursor to the scythe, another hand tool.

There was considerable debate around the use of sickles and scythes as labour efficient and labour saving tools. The sickle had one great advantage: it was easier for women to use and allowed farmers and others to employ them as well as men in cutting and gathering the crop. Women’s wages were also considerably lower than those given to male workers at the harvest. The cost of the harvest could be much reduced where women were employed.

Henry Stephens, the well-known agricultural writer, gives a full description of the sickle and its use in The Book of the Farm in 1854. This is what he says about it:

“The sickle is a very simple, but, at the same time, so far as it goes, a very efficient instrument. It is employed in various states, not differing much in the general form, though exhibiting marked differences in the detail; but those varieties are confined under two very distinct forms, the toothed and the smooth-edged sickles.
The blade of the common toothed sickle, is principally made of iron, but with an edging of steel; the teeth are formed by striking with a chisel and hammer, in the manner of file-cutting, the cutting-edge being only on the lower side; but when the blade has been bent to the proper form, tempered, and ground on the smooth side, the serratures are brought prominently out on the edge of the blade; and as the striking of the teeth is performed in a position oblique to the edge of the blade, at an angle of about 70 degrees, the serratures on the edge acquire what is called a hook towards the helve, thus causing the instrument to cut keenly in that direction, when drawn through the standing corn. When the blade has been thus finished, a wooden helve of the simplest form is fitted upon the pointed tne formed at its root for that purpose. The toothed sickle is made with various degrees of curvature and of weight, but chiefly as represented in the figure, and it has been the subject of several patents, chiefly depending on the formation of the blade. One of these is only of two or three years’ standing, and promises to be an important one. Messrs Sorby and Son, of Sheffield, are the patentees; and the principle upon which their patent is based, is a blade of rolled cut-steel swedged into a form that gives a sufficient degree of stiffness to the blade, without the increase of weight that accompanies the thick-backed or the other patent ribbed-back sickles. In the new patent, the advantage of a small quantity of the very best material-cast steel-is combined with extreme lightness and a due degree of strength and stiffness, the latter arising from the swedged or moulded back.
The smooth-edged sickle, or scythe-hook, as sometimes called, differs from the former in being broader in the blade, and longer withal, but in curvature it resembles the former; and its chief difference lies in being ground on both sides, to form a fine and thin sharp edge. Like the toothed sickle, the blade has undergone various improvements; and Mr Sorby’s cast-steel swedged-blade is also extended to the smooth-edged sickle.
In the formation of the sickle, the curvature of the blade is a point of more importance than to a careless observer may appear; and though the ordinary reaper is seldom qualified to judge in this matter, he may feel pleased to be informed, that there is a certain curvature that will give to the muscles of his right arm the least possible cause for exertion, while there are other curves that, if given to the blade of the sickle, would cause hi to expend to expend a great amount of unnecessary exertion in the arm, and a consequent unnecessary fatigue would follow. The smooth-edged sickle has a curvature approaching very near to that which, in this instrument, may be termed the curve of least exertion; and throughout that portion of the sickle that performs the cutting process, it possesses this peculiar property, from the following circumstance, that lines diverging from the centre of the handle of the sickle, and intersecting the curve of the cutting-edge, all the diverging lines will form equal angles with the tangents to the curve at the points of intersection. This property gives to the cutting-edge a uniform tendency to cut at every point in its length, without any other exertion than a direct pull upon the helve; were the curvature less at any point, a pressure of the hand would be required to keep the edge to the work, and were the curvature greater at any point, or on the whole, the exertion to make the cut would be greater, as it would then become more direct, instead of the oblique drawing or sawing cut, which, in all cases, is the most effective, and productive of least resistance.
A mode of using the smooth-edged sickle has of late years come into some repute, known in Scotland by the provincial term dinging-in (striking-in). In this process the sickle is not drawn through the straw, but is truck against it, somewhat in the manner of using a scythe; indeed, the practice originated in the attempt that was made some years ago to introduce the Hainault scythe in the harvest operations of this country, but without success. In the (dinging-in) practice, the left hand is employed, with it back towards the right, in slightly bending down the grain, and holding it to the blow of the sickle. A man practiced in this mode of working will do one-half more work than is usually done in the common way; but the stubble is left regular, and, except by very expert hands, there is a want of tidiness in the process. It is obvious that this is the same mode of cutting corn as bagging.”

Have you seen sickles used for cutting the grain crop?