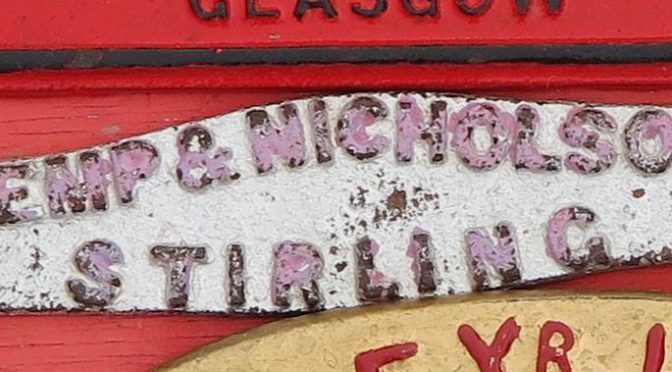 Under the letter K we have a number of names of key makers who were known in their localities. In Stirlingshire Kemp & Nicholson of the Scottish Central Implement Works was well known. The company conducted business from their premises in Dumbarton Road, Stirling, as Kemp, Murray & Nicholson, in 1858. The company had further business activities further east in East Lothian. In the North British Agriculturist in November 1858 stated that “Kemp, Murray & Nicholson have removed from their branch establishment, Haddington, to their headquarters in Stirling where they have been in business for the last 10 years and where their business will henceforth be exclusively carried on.” By 1859 the company described itself as agricultural implement manufacturers, though by 1870 it had expanded its range of trades to be joiners, agricultural implement and reaping machine makers and engineers, activities that it became renowned for in the following decades.

The company continued to trade until shortly after the death of Major Kemp Smith in March 1930.

Robert Kydd, Trades Lane, Coupar Angus, was already a well-known agricultural implement maker from the mid-1870s. He brought attention to his manufactures in the North British Agriculturist on 28 July 1875. He was a regular exhibitor at the Highland Show from 1879 until 1900 as well as a keen competitor of his implements and machines. He entered the Highland Society’s trial of potato diggers in 1881 and the Royal Agricultural Society of England’s trials of potato raising machines in 1888. He also entered the Highland Society’s trial of combined reapers and binders, or lifting and binding machines in 1882.

Kydd quickly gained a reputation for his implements and machines. In 1887 his two row potato planter was “now so well and favourably known as to require no description or comment”. By 1896 the Dundee Advertiser could state that “he has been getting quite a name far afield”. He was already well noted for his potato diggers as well as ploughs and drill ploughs. All of his implements showed “good workmanship”. He was recorded in trades directories as an implement maker until at least 1900 and as a smith until 1913.

The name of Kirkwood was well-known in the Lothians in the nineteenth century. One of the names that keeps on cropping up over and over again in the farming papers of nineteenth century Scotland is William Kirkwood, agricultural implement maker, Lothian Bridge, Dalkeith, Midlothian.
William first appears in the North British agriculturist in 1856 as an implement maker at Duddingston. He moved from there in late 1865 when he adverts record William Kirkwood, implement maker, Lothian Bridge (late Duddingston). He undertook a number of trades: as agricultural implement maker, smith and as smith and implement maker.
William was a regular exhibitor at the Highland Show. Although he exhibited in the main show districts including Dumfries, Kelso, Stirling, he most regularly exhibit at Edinburgh. He exhibited at that last location in 1859, 1869, 1877, 1893, 1899, and 1907. At the Show he was an award-winning maker, winning numerous prizes. They included:

“Mr William H. Kirkwood, agricultural implement maker, Lothian Bridge, died suddenly yesterday, after a few days’ illness, at the age of 63 years. Deceased, who was a native of Edinburgh, began his engineering career in the Singer Sewing Machine Works, in the West of Scotland, and on the death of his father, he acquired the engineering business at Lothian Bridge. Mr Kirkwood was particularly successful in the manufacture of ploughs, and gained various awards from the Highland and Agricultural Society, and other societies, for improvements both ploughs and harrows. He took a lively interest in the affairs of the Newtongrange district, was for several years a member of the Parish Council, and was senior elder and session clerk for Newbattle Parish Church.