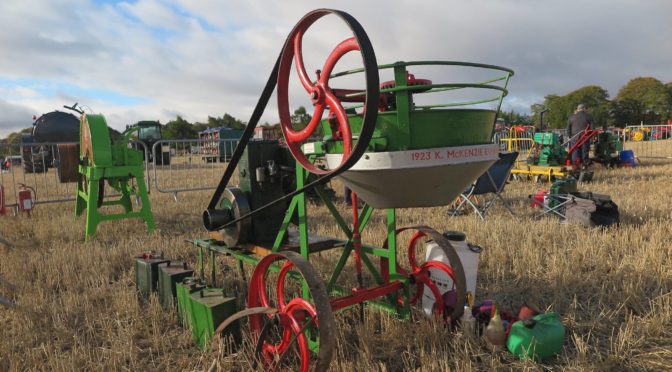 George McCartney & Co., engineers, Cunnock was already established by 1850. In 1887 it was described as one of the “principal” exhibitors of implements at the Ayrshire Agricultural Association’s show. By 1894 it was located at Glaisnock Street in Old Cumnock, and in 1903 it gave its address as Burnside Works, Cumnock, where it remained in business until the 1930s.

In 1893 the company described itself as engineers, millwrights and ironmongers. It was also an agricultural implement maker, electrical accessory and appliance manufacturer, engineer, manufacturer and mechanical engineer. It was most well known for its thrashing machines and reaping machines. In 1870 the Highland and Agricultural Society of Scotland awarded its silver medal for its 3 or 4 horse power thrashing machine and in 1875 that society also awarded it a medium silver medal for one of its thrashing machines. It was its thrashing machines that it also heavily advertised in the Scottish agricultural press, in the North British Agriculturist from 1861, and the Scottish Farmer from 1893. In 1910 its threshing machines included a 3 feet 8 in bolster high speed threshing machine, with crank shakers, riddle and fanners (which sold at £77; with double blast £83), its “Eclipse” combined thresher and dresser, 20 inch wide, with horse gear (for £32); and a 16 inch thresher dresser, with revolving shakers and horse gear (for £27).