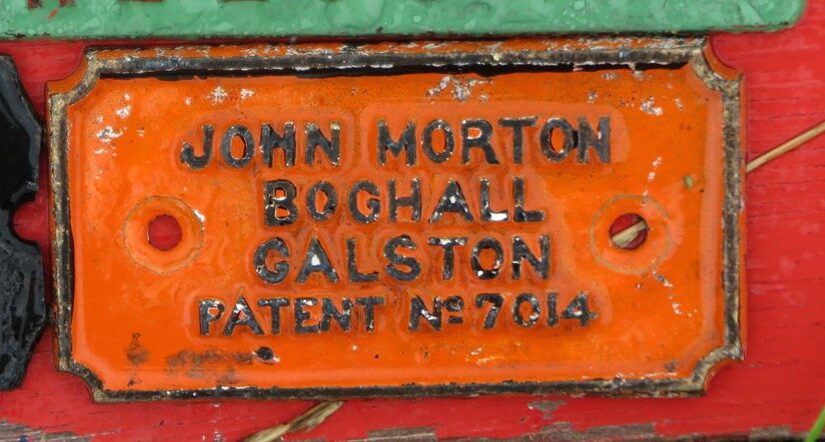 Under M we have a number of major players in Scottish agricultural implement and machine making. Many readers will be aware of a good number of the makers.

The company was an innovative one: in 1895 one trades directory described the company as “G. W. Murray & Co., patentees of potato planters and manufacturers of crown threshers for hand and foot power and also for pony power, Banff.” A patent from 1870 was for “improvements in means of apparatus employed in ploughing or tilling land”. Another from 1871 was for “improvements in apparatus for ploughing or tilling land”. It also entered its implements and machines for the highly prestigious trials of the Highland and Agricultural Society of Scotland. They included the trials of potato planters in 1883, ploughs (1883), grubbers (1883), implements for autumn cultivation of stubble (1885), and implements for spring cultivation (1885).

The company was one for the few Scottish companies to have received an award from the Royal Agricultural Society of England – for a double furrow plough in 1870. In 1872 it was awarded a first prize of 10L for a double furrow plough not exceeding 3.5cwt a highly commended for a double mouldboard or ridging plough not exceeding 2.5cwt. In 1874 it was awarded second prize of 5L for drill without manure box, for turnips and other roots on the ridge. In 1880 it received a silver medal for a two row potato planter.
The company continued in business until 1897. An auction sale was held on 18 August of “engineers’, iron founders’, and agricultural implement makers’ plant” “owing to the proprietor giving up business.

An Ayrshire implement maker for which there are few details is John Morton, Boghall Smithy, Galston. He is recorded at that address in the mid 1890s. By the fiirst decade of the twentieth century he may have moved premises, as there is a John Morton recorded at Strath Road, Newmilns. At Galston, Morton undertook business which extended to the south of Scotland. He exhibited at the Highland Show in Edinburgh in 1893, at the Dumfries show in 1895 and the Glasgow show in 1897. There he exhibited his rick lifter and a patent steel plough.

By the first decade of the twentieth century, trade directories record him as an agricultural implement maker, a millwright and a smith.

Another of the less-well-known implement makers that is recollected today is R. G. Morton, Errol. In its day, the company was a highly regarded engine maker, making among other items, horizontal engines, semi-portable engines, boilers, turbines and threshing mills.

The company actively promoted its manufactures in both the North British Agriculturist and the Scottish Farmers, especially from the mid 1880s onwards until 1913. It was a regular attender at the Highland Show from 1870. It considered itself as an innovative business, entering a number of its manufactures for trials of the Highland and Agricultural Society of Scotland. These included an exhaust fan in 1884 which won a £10 prize. In 1884 it entered the Society’s trial of machines adapted for cleaning all sorts of grain and other seeds from weeds. In 1888 one of its steam engines was selected for and entered for trial. In 1890 it entered the Society’s trial of grist mills.
By trade, the company was an agricultural implement maker, a boilermaker, engineer and millwright, a machine maker, a mechanical engineer, and more lately a motor-van, lorry and builder.

“To farmers of twenty-five to forty years ago, few men were better known in the agricultural engineering business than Mr R. Aikman Gray Morton, whose death has taken place at his son’s residence, 2 Hamilton Drive, Bothwell. Mr R. G. Morton was the noted millwright and agricultural engineer of Errol, Perthshire, and in his time carried on an extensive business which had a wide and well-established reputation. Mr Morton first made his mark in 1868, having in that year invented the “Comb Drum” threshing machine, an implement which practically revolutionised the system of grain threshing then in force. One of his greatest improvements on the original Comb Drum machine was the introduction of the double drum, by which it was possible not only to thresh clean grain of every description, but also to preserve the most tender-fibres straw from being unduly broken up or damaged. In addition to threshing machines and farm engines (which at Errol had been brought to a wonderful degree of perfection), Mr Morton did a large trade in numerous other agricultural appliances, as well as in general machinery for manufacturing purposes, and these were sent to almost every manufacturing centre in the world. He was a man of high ideal and universally esteemed.”
Morton is a fantastic example of how innovative engineering was carried on in rural Scotland and of its outstanding reputation.