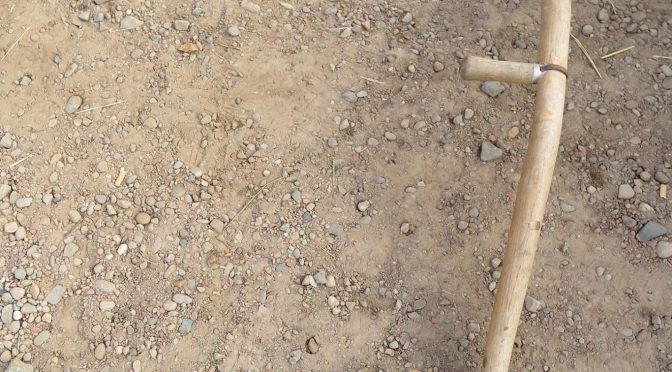 What was it like cutting the grain harvest in the mid-nineteenth century before reaping machines started to become adopted?

Harvesting tools and machines have had many significant changes in the last two centuries. In the mid-nineteenth century the scythe was seen as a more labour efficient way of cutting the grain crop over sickles. Today we think of cutting the crop by scythe as antiquated. However, even into the second half of the twentieth century that hand took still had its uses: for example opening fields for the binder or cutting out laid patches of crop. In the Western Isles it continued to be used as the main harvesting took on some farms until that time or later. 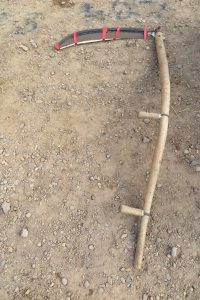 Henry Stephens, whose The Book of the Farm was revised and updated on a number of occasions from 1844 provides a detailed account of cutting the grain crop with the scythe in 1854. This is what he writes:

“Reaping with the scythe is a nice operation, and requires considerable skill. The scythes should be mounted and made fit for work some time before being wanted in the harvest-field. There should be a number of small articles always ready in the field in case of accident, the procuring of which wastes much time, when not at hand. These are, a small hammer for fastening the wedges of scythe-ferules and of rake-handles; bits of old sole-leather for bedding the tines of the scythes upon; pieces of cord for tying anything; small large-headed nails for fixing the stays to the end of the scythes; a large coarse file for rubbing down the turned-up point of a scythe, when it happens to come against a stone; a sharp knife for cutting bits of leather, and for removing any raggedness upon the rake or cradles.
The various forms of scythes are the cradle-scythe, the straight-sneded scythe, and that with the bend sned; and the greatest favourite amongst mowers is the cradle-scythe, because it is easiest to wield by the arms, and does not twist the lumber-region of the body so much as the 2 common scythes; and, I may remark, that it is the last effect which forms the greatest objection against the scythes in ordinary use. And yet it is not easy to see why the use of the cradle-scythe, which is borne by the arms alone, in front of the body, and which does not admit of being balanced in one hand like the other scythes, should be less fatiguing to work with; yet there is no doubt of the fact, and, on that account more work is done with it.
In commencing to cut a field of corn with the scythe, and that side should be chosen from which the corn happens to lie, if it be laid, and if not, then the side from which the wind blows. The scythe makes the lowest and evenest stubble across the ridges, and then also most easily passes over the open-furrows. Other things being favourable, it is best to begin at that side of a field which is on the left hand of the mowers. If all these conveniences cannot be conjoined, as many as can should be taken advantage of. The ground should have been rolled, and all large stones removed in spring, otherwise the scythes will run the risk of being injured in the face by stones, and even by clods. 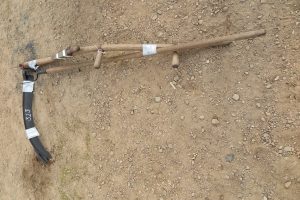 I have already said, that reaping with the scythe is best executed by the mowers being in what is called heads, namely, a head of 3 scythesmen, 3 gatherers, 3 bandsters, and 1 man-raker, or of 2 scythes-men, 2 gatherers, 2 bandsters, and 1 woman-raker. On a large farm the heads may consist of the former, and on a small one of the latter number. The best opening that can be made of a field for scythe-work, is to mow along the ridge by the side of the fence, which is kept on the left hand, from the top to the bottom of the field: and while one head is doing this, let another mow along the bottom hedge-ridge, the whole length of the field, and this open up 2 of its sides. After this, the first head commences moving at the lowest corner of the standing corn, across 6 ridges, or 30 yards, which is as far as a scythe will cut corn with one sharping. Suppose all these preliminaries settled, the scythesman who is to take the lead first sharpens his scythe. In sharping a scythe for cutting corn, the scythe-stone has to be put frequently in requisition, for unless the edge is kept clean, the mowing will not only be not easy, but bad; and unless a scythesman can keep a keen edge on his scythe, he will never be a good mower, and will always feel the work fatiguing to him. The sharping should always be finished with the straik or strickle. The stone need not be used at every landing, the strickle answering that purpose; but whenever the scythe feels like a drag on the arms, the stone should be used. In mowing, it is the duty of the mower to lay the cut corn at right angles to his own line of motion, and the straws parallel to each other; and to maintain this essential requisite in corn-mowing, he should not swing his arms too far to the right in entering the sweep of his cut, for he will not be able to turn far enough towards the left, and will necessarily lay the swath short of the right angle; nor should he bring his arms too far round to the left, as he will lay the swath beyond the right angle; and, in either case, the straws will lie in the swath partly above each other, and with uneven ends, to put which even in the sheaf is waste of time. He should proceed straight forward, with a steady motion of arms and limbs, bearing the greatest part of the weight of the body on the right leg, which is kept slightly in advance. The sweep of the scythe will measure about 7 feet in length, and 14 or 15 inches in breadth. The woman gatherers follow by making a band, from the swath, and laying as much of the swath in it as will make a suitable sheaf. The gatherer is required to be an active person, and she will have as much to do as she can overtake. The bandster follows her, and binds the sheaves, and say 2 of the 3 bandsters, set the stooks together, so that a stook is easily made up amongst them; and in setting them, while crossing the ridges, they should be placed on the same ridge, to give the people who remove them with the cart the least trouble. Last of all comes the raker, who clears the ground between the stooks with his large rake, of all loose straws, and brings them to a bandster, who binds them together by themselves, and sets them in bundles behind the stooks. This is better than putting the rakings into the heart of a sheaf, where they will not thrash clean with the rest of the corn; and, moreover, as they may contain earth and small stones, and also inferior grain, from straws which may have fallen down before the mowing, it is better to thrash bundles of rakings by themselves”

It was quite a skill to work with the scythe!

The photographs were taken at Lanark Auction Market.