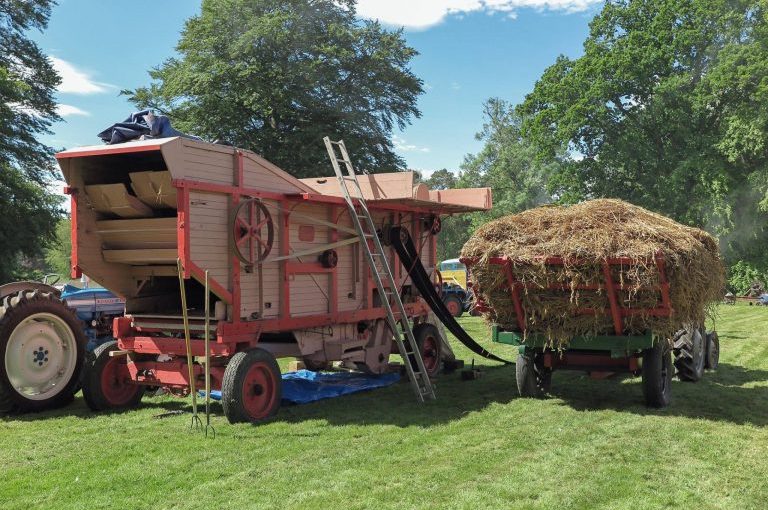 By the mid nineteenth century when Scotland was being intensively mapped by the Ordnance Survey, its surveyors were out and about on the land, visiting farms and other settlements, recording the names of every building and feature. In their accounts a number of them referred to the presence of thrashing mills as part of the farm steadings.

The OS name books record that in the county of Fife there were a number of steam threshing machines erected at the farm steadings. These include:

Lochran, Cleish – A good farm house and steading including a thrashing mill worked by steam, and an excellent farm of arable land attached. Occupier Mr Tod, proprietor Mr Patrick Adam esq.
Skeddoway, Dysart – A first class farm house having extensive and well constructed offices with a steam thrashing mill attached.
Cuttlehill, Aberdour – A near country mansion delightfully situated on an eminence, commanding an extensive view. It is well sheltered with young plantings which are tastefully laid. A little north of the house are extensive out offices, a threshing mill (worked by steam) and [?] works. In the front of the mansion, or a little south, is a small wooded lawn, on the north west side of it a fruit and vegetable garden. The property of the heir of the late Robert Wemyss. Occupier Mr Burns, late factor of the estate.
Carskurdo – This is a large farm steading with cottars houses. The thrashing mill driven by steam power. It is occupied by Mr David Yool, Blebo Mills, Dura Den, and the proprietor is Mr Gullane, Dunfermline.
Nydie, St Andrews – This is a very large farm steading with dwelling house and garden. The thrashing machine is driven by steam power. The tenant is Mr Robert Walker and the proprietor is Captain Robert Bethune of Blebo.

Blebo Mains, Kemback – This is a large and very convenient farm steading with dwelling house and garden. The thrashing machines is driven by steam. The farm is occupied by Mr Walker and the proprietor is Alexander Beaton esq, Blebo.
Newbigging, Ceres – This is a large farm steading with dwelling house of two stories and small garden. The thrashing mill is driven by steam. The whole of the farm buildings are of recent erection, and occupied by Mr John Walker. The proprietor is J. A. Thomson esq of Charleton. Pittillock, Arngask – An excellent farm house with commodious outbuildings, and a steam thrashing mill attached. Occupied by Mr Clark.
Rires – A large farm house and office houses all in good repair with steam power. Thrashing mill in good working order attached to these. Is a large farm of ground, the property of Mr James Sith (farmer).
Dalniel Den – A large and well built farm house and office houses with a steam power thrashing mill all in good repair the property of General Lindsay of Balcarres & occupied by Mr Bogie, farmer.