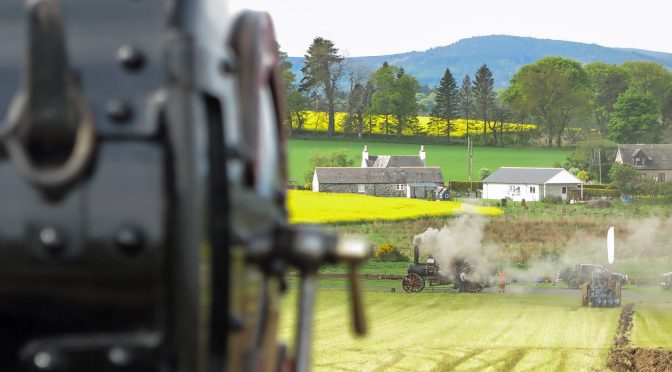 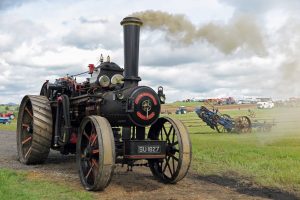 It isn’t often that there are demonstrations of steam ploughing in Scotland. As a working practice, it continued on farms until the early 1950s. The last working sets appear to have been in East Lothian.

The steam ploughing at B. A. Stores uses the double engine system, with an engine at either end of the field. It became synonymous with 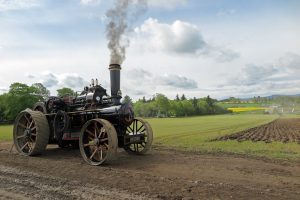 John Fowler & Co. (Leeds), Ltd, the most famous ploughing maker of all, though not the only one. The plough is pulled between the engines, going backwards and forwards. One set of ploughs work one way; the plough is tipped up, and the other set work back the other way.

The two engines are from different sets of engines. At the top of the 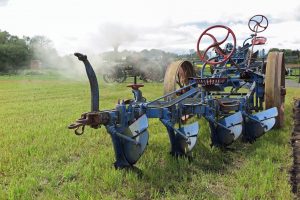 field is “Master” from 1918. His partner engine, “Mistress”, still survives in preservation in Fife – they were working at the 2014 Scottish Ploughing Championships. At the bottom of the field is a smaller engine “Sam Hird”, of 1925, named after its owner, Samuel Hird, a contractor of steam ploughing who lived for many years at Sauchenshaws, before moving into Fife, at Kincaple. That engine played a central role in the early days of the Scottish traction preservation engine movement, and was “saved from the cutter” by the newly established Scottish Traction Engine Society in the early 1960s.