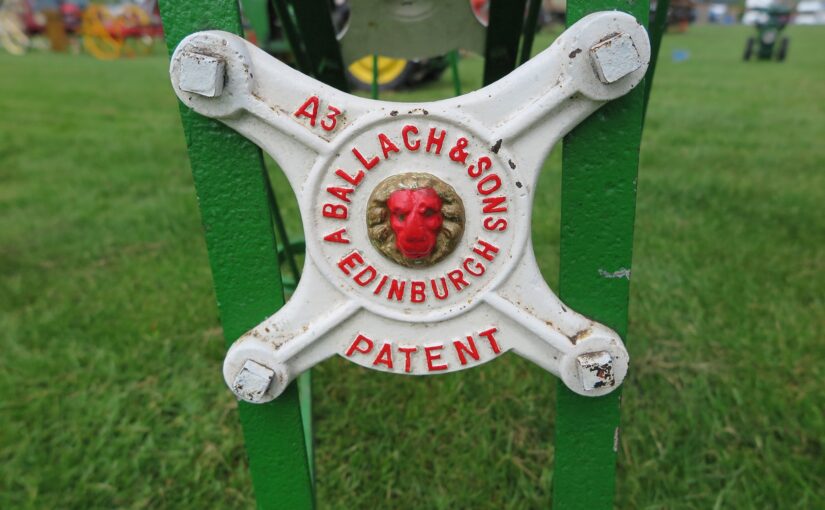 Sharp knives were important for harvesting a range of crops, including the grain crop regardless of how it was cut: sickle, scythe, reaping machine or combine harvester.

In 1908 Stephen’s Book of the Farm was updated by James Macdonald. It included a short description of the importance of having a sharp knife: “Keep the knives as sharp as possible, as good work and light draught cannot be had without sharp knives. Where two or more reapers are kept going, it is advisable to keep one man sharpening knives, as then they are always in good repair, and cutting goes on more smoothly and rapidly than when the driver has to look after not only his horses but his mower and knives as well. The most common method of sharpening the knives of reapers is with a fine file for the purpose. Machines for sharpening are now in use to some extent.” Macdonald noted that there was one made by Harrison, McGregor & Co..

Knife sharpeners had been in use for some time before that date. On 23 July 1894 G. W. Murray & Co., Banff, advertised its Victory Knife Sharpener in the Aberdeen Press and Journal. In that same month another local maker, Ben Reid & Co., Bon Accord Works, Aberdeen, advertised its automatic reaper knife sharpener. By 1890 C. F. Wilson & Co., Aberdeen, was advertising its Plano Sickle Grinders as “the best reaper knife sharpener ever offered to farmers”. Some also became especially sophisticated. In 1908 the Aberdeen Press and Journal recorded that at the Highland Show, P. & R. Fleming and Co., Argyle Street, Glasgow, exhibited a “section remover and knife sharpener, by means of which farmers can remove and repair old blades of harvesting machines, etc. It is a very handy implement.” Other makers of knife sharpeners included J. L. & J. Ballach, agricultural implement makers, Gorgie, Edinburgh. A number of these can still be seen around the rally fields. In 1952 David Ritchie, Whitehills, Forfar, manufactured knife-sharpening stands.

Do you remember sharpening knives at harvest time?

The photographs were taken at the Borders Vintage Rally, May 2015.