Green crops required a lot of looking after before the days of weedkillers.  The soil was moved around to stop the weeds from growing. 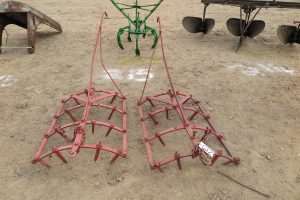 Harrowing started around a fortnight after sowing, if the surface of the soil was dry.  The “common” harrow was sometimes used to harrow down drill.  An implement that was even better was the saddle drill harrow.  This harrow, made in an arch form which partially embraced the curvature of the drills, was worked in pairs.  The pair of harrows were drawn by a horse, walking between the drills.

The photographs were taken at the Scottish National Tractor Show, Lanark, September 2015.