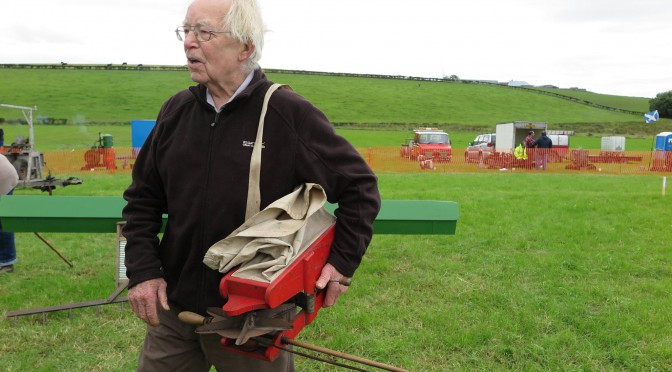 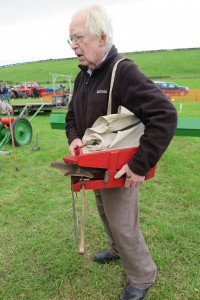 By the late 1880s, the American implement and machine makers had developed the very ingenious hand broadcast sowers.  One was brought into England by Mr J. H. Newton, West Derby, Liverpool.  It comprised “a light box of thin wood is carried under the left arm with a strap over the shoulder.  To the top part of this is attached a canvas receptacle for the seed, while on front and below is fixed a little tinned iron wheel, or rather four crossed pieces revolving on a spindle.  Round this spindle is passed a thong which forms the string of a bow, and by “see-sawing” this bow the wheel revolves in alternate directions.  An eccentric on the spindle moves a little hopper which heeps a regular stream of seed falling on to the 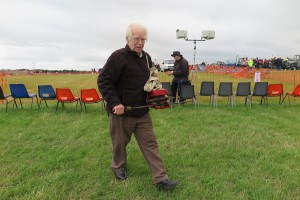 revolving “wheel” and this in its turn sends the grain spinning out all round.  It will cover a width of about 30 feet, but some have found it best in practice to go up the centre of one rig and down another, thus taking 14 or 16 feet at a time.  It is thus possible, if kept supplied with seed, to do four acres per hour, while three is easy of attainment.  To ensure an ever braid, the machine should be carried in a level position. It sows all kinds of grain admirably, and is equally well adapted for sowing dry artificial manure. The quantity to be sown per acre is regulated by a little slide.” 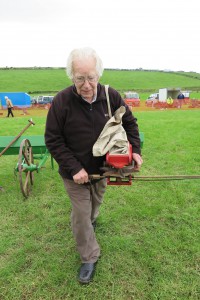 A version of this hand broadcast sower was made in Scotland.  This was the “Aero”, associated with Kilmarnock.  It was extensively advertised by the ironmonger, David Lauder, firstly of King Street, then of Portland Street, from at least 1912 onwards.  He especially advertised it in the 1920s and 1930s, in the Scottish agricultural newspapers the North British Agriculturist and The Scottish farmer. It continued to be advertised into the 1960s.

There are still example of the Aero broadcast sower around the Scottish rallies.  The photographs show it being demonstrated at the Ayr Vintage Rally, 2015.