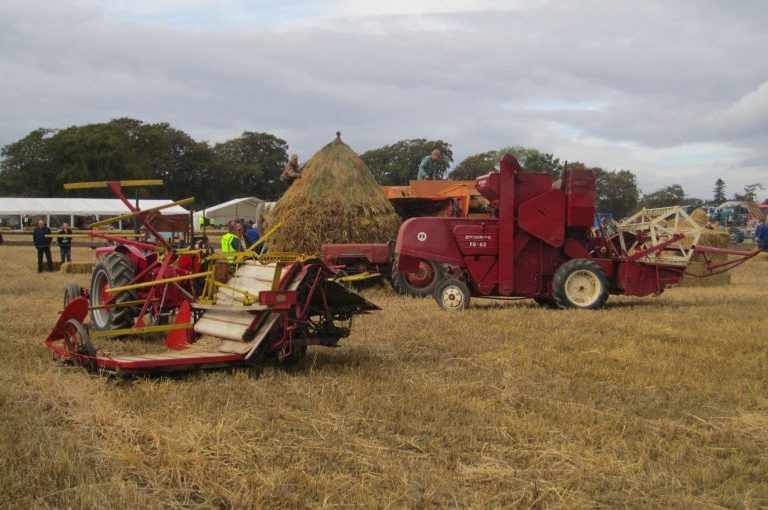 The Royal Highland and Agricultural Society of Scotland played an important role in encouraging the development of agricultural implements and machines, exhibiting them and arranging trials and demonstrations of them. In the 1890s the Society also arranged working demonstrations. These were for binders. This was one of the only times in the history of the Society that it arranged demonstrations rather than trials. They were not competitive and awards were not given. They were arranged to give farmers and agriculturists the opportunity to see these machines at work.

These exhibitions were undertaken in different locations throughout the country. These were usually in the different show districts where the show was in attendance.

The following are a number of accounts of these exhibitions. They set out how the exhibitions were arranged, and describe how they worked in sometimes trying conditions with twisted and flattened crops.

Exhibition in Midlothian in 1893 (from Elgin courant and Morayshire advertiser, 22 August 1893)
“On Wednesday last an exhibition of binders at work was held under the auspices of the Highland and Agricultural Society at Niddrie Mains, Liberton, near Edinburgh. The exhibition was not a strictly competitive one. No awards were given, but a committee of gentlemen who acted as stewards made a report to the Society, in which they embodied their observations regarding the performances of the various machines that were at work. The committee consisted of Messrs Jonathan Middleton, Clay of Allan, Ross-shire; Geo. R. Glendinning, Hatton Mains; J. T. Paterson, Grange Loan, Edinburgh; and A. S. Logan, Fernie Castle, along with whom there was Mr Park, the Society’s engineer.
The following is the jurors’ preliminary report: “We have pleasure in reporting that we carefully watched the working of the eleven binders that came forward. They were in the first place tried in a field of oats which was cut into plots of one acre each. Lots were drawn by the competitors for the different plots, and care was taken to make the trial as even as possible to all. The oat crop was very rank, and badly laid and twisted. The test was therefore an exceedingly severe one. Indeed much of the crop was so badly laid and twisted that it seemed hardly likely that either the binder or the reaper could possibly make passable work in it. In these circumstances it is peculiarly gratifying to be able to say that upon the whole the work of cutting and binding was done in a satisfactory manner-better cut, most probably, than it would have been by the ordinary reaper. Very little fault could be found with either the cutting or binding. Most of the machines had difficulty in separating the one sheaf from the other, on account of the rank, tangled condition of the crop, yet, even in this respect, the majority of the machines did surprisingly good work. The crop could be cut only in the direction, and in most cases the work was slowly done. The plots in the field of oats having been finished, all the machines, excepting the “Jonson Harvester”, was tried in an adjacent field of barley. The crop of barley was not rank, but it was much laid and twisted. The quantity of the work done here was throughout of the most satisfactory character, so nearly perfect, indeed, that the most fastidious farmer could find little fault with it. This great success with the barley is all the more noteworthy and gratifying that, when examined by a large committee of experienced farmers a fortnight ago, the crop on this field was so much laid and twisted that it was thought unlikely that any competitor would attempt to cut it either with a reaper or binder. It should be explained that the Kearsley binder, having come late into the field, cut only about half of its plot of oats.”

Exhibition of binders near Perth (from Dundee advertiser, 19 August 1896)
“A trial of self-binding reaping machines was held yesterday under the auspices of the Highland Society on the farm of North Muirton, near Perth, tenanted by Mr John Morton. The proceedings might be termed more of an exhibition than a trial, as no prizes were given, and no order of merit was announced at the close of the day. The Society Stewards in charge of the exhibition were Messrs Jonathan Middleton, Clay of Allan, Easter Ross, and J. R. Glandinning, Hatton Mains, Midlothian, Mr J. D. Park, the official Engineer, being associated with them. A Committee of local Directors was composed of Mr W. S. Ferguson, Pictstonhill; Mr Andrew Hutcheson, Beechwood; Mr R. Paterson, Hill of Drip, Stirling; and Mr Dun, Easter Kincaple, Fifeshire; Mr James Macdonald, Secretary to the Society, being on the ground, to take general note of proceedings. Ten machines had been entered, and nine were forward. These were-the “Bisset” new patent open back steel-built binder, made and exhibited by Messrs J. Bisset & Sons, Blairgowrie; the “Bonnie” binder, driven with steel chain, made by the Johnstone Harvester Company, New York, and shown by Messrs Blackstone & Co., Stamford; the Adriance rear discharge binder, of New York, make, shown by Messrs James Gray & Co., Stilring; the Albion new patent machine, made and exhibited by Messrs Harrison, McGregor & Co., Limited, Leigh; the Hornsby harvester, shown by the makers, Messrs Richard Hornsby & Sons, Limited, Grantham; the Samuelston new patent low down harvester, from the works of Messrs Samuelston & Co., Limited, Banbury, Oxon; the “Elevator” binder from the same firm, with three canvas arrangement; the Massey Harris open end binder, of Brantford make, and shown by Messrs john Wallace & Sons, Glasgow; and the Walter A. Wood open rear harvester, of well-known American make. There was a fair attendance of agriculturists during the day. Among those on the ground were Hon A. D. Murray, Ardgilzean; Mr Macduff of Bonhard; Mr R. Anderson, Balbrogie; Mr Hay, West Cultmalundie; Mr Robertson, Blackhaugh; Mr R. Hope, Huntingtower; Mr Pople, Newhouse; Mr McLaren, Windy Edge; Mr McFarlane, Southfield, Abernyte; Mr Robertson, Balthayock; Mr Whitton of Couston; Mr Lover, Dean Park, Edinburgh; Mr E. Fairweather, Clashbenny; Mr Wilson of Messrs Watt & Co., Cupar; Mr H. Martin, Flowerdale, Collace; Mr W. B. Stephenson, Broombarns; Mr John Graham, Kildinny; Mr Gardiner, East Mill, Auchterarder; Mr Westwood, Dalreoch, Dunning; Mr A. Macduff Duncan of Kirklands; Mr Thomas Hollimngsworth, Powgavie; Mr Hume, Rossie, Dunning; Mr Fenwick, Broadleys; Mr D. Peddie, Forteviot; Mr P. Scrimgeour, Balboughty, Scone; Mr Bruce, Rosefield, Balbeggie; Mr T. S. Thoms, Benvie; Mr Hay of Hay & Co., Perth; Mr Scott, Shielhill, Stanley; Mr Grahame, Scones Lethendy.
Work was started about ten o’clock forenoon in a splendid 21 acre field of oats. A good deal of the crop was more or less laid and twisted, the field thus putting the machines to a very real test. In the morning plots of one-third acre each. In extent were balloted for, and a start was made under fairly good conditions. There was a little dampness owing to the rain on Monday night, but nothing to speak of. The cloths of the machines were affected to some extent during the first half hour or so, but as the sun gained in strength the draught of the machines lightened very considerably. All the machines had cloths. It is evident, therefore, that these arrangements are not played out, although a good deal has been heard of the sparred substitutes. Six of the machines, it may be noted, made left-hand cut, and three the right-hand cut. After a mid-day interval the machines were set in file round the remaining square of grain. This was the most interesting and, upon the whole, the most instructive part of the proceedings, as there was no question of luck in the business. The machines, with one or two exceptions, made a very good job of the stubble. Two or three were somewhat heavy in draught, one or two were decidedly noisy-too much of the “craw ratle” order-a small proportion were a little faulty in sheafing, and most of them showed slight imperfections in delivery. Upon the whole the favour of the unofficial “bench” on the ground went in greatest measure to the Bisset and Walter Wood machines. The former made a good all-round job, and was specially meritorious at the stubble and insheafing; the latter delivered remarkably well, and appeared to be light in draught. The Adriance made tidy work in cutting and sheafing, and worked sweetly. It might possibly be seen to less advantage on an extra heavy crop. Men on the ground also favoured the Hornsby a good deal, also the Albion and the Massey Harris. These are good machines. The forthcoming volume of the Highland Society Transactions will contain notes on the exhibition from the stewards and the engineer. The trials were very interesting, but if the draught of the machines had been tested the results would have been more valuable. It is by no means an easy matter to make fair tests of draught in one busy day, but it might be sone.

In 1901 the exhibition of binders by the Royal Highland and Agricultural Society of Scotland was abandoned. According to the Elgin Courant, and Morayshire Advertiser of 30 July 1901 this had “been brought about by the fact that the majority of the leading binder firms refrained from entering machines for the trial, an action on the part of these firms that is much to be regretted.”

The photographs were taken at the Strathnairn Farmer’s Show.