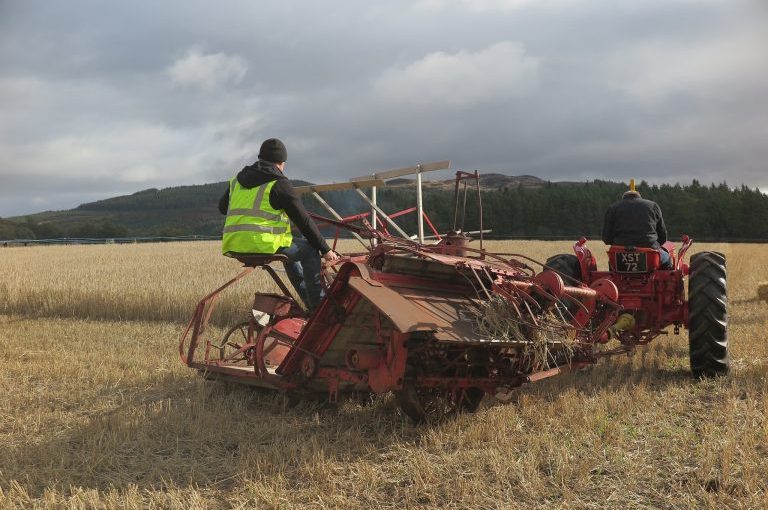 Trials were an important way to demonstrate new agricultural implements and machines in a district. They were usually arranged by local or regional agricultural societies, though the Royal Highland and Agricultural Society of Scotland also played an important role in organising them. They enabled the societies to bring together a number of machines from a range of makers to compete against one another and demonstrate how they compared to one another. They let farmers and other agriculturists see the merits – and otherwise – of a variety of them before purchasing one for themselves. Trials could also be social affairs, attended by the leading farmers of a district and concluded with a dinner.

Trials were especially important for letting farmers and agriculturists see innovative implements and machines at work. Trials included ones for binders and other harvesting machinery, as well as double furrowed ploughs, and tractors.

In the 1890s a number of local trials were held in the north east to demonstrate binders. They were made by societies such as the Northern Agricultural Society and the Morayshire Farmers’ Club.

The following are two accounts of local trials held in the 1890s. They give a full account of how they are arranged, attendees, how they worked, and social activities. They highlight the novelty of the binders.

Trial of binders at Inverurie (from The Aberdeen Journal, 8 September 1890)
“The Northern Agricultural Society, with its usual energy and anxiety for the furthering of the aim of its existence-the promotion of agricultural interests-this season organised an exhibition of binders, which took place on Saturday on the farm of Lofthillock, Inveruris, fields on which were kindly placed at the disposal of the Executive by Mrs Philip. It was originally intended to hold the exhibition on the farm of Balhaggardy, but the serious illness of Mr Maitland, sen., rendered that proposal impossible. The weather was beautifully fine, and a large number of leading agriculturists assembled to witness the display. Amongst those who attended were:- Messrs Mackie, Petty, Fyvie; Forrest, Castle of Auchry, Monquhitter; George Wilken, Waterside of Forres; Cruickshank, Comisty; Cocker, Hill of Petty; Bruce, Collithie; Bean, Balquhain; Burr, Tulloford; Morrison, Hatton Slap; John Milne, Mains of Laithers; Gall, Smiddyburn; G. A. Duncan, manager, Messrs G. W. Murray & Co., Banff; Mackintosh, Aberdeen; Turnbull, Smithston; Law, Lochead; France, of Messrs Cardno & Darling; Adie, late of Lenabo, Longside; Davidson, Mill of Clola; Thompson, Haddo, Methlic; Walker, Tillygreig; Stewart, Knapperna; Hugh Wilson, Milton of Noth; Kiloh, Ard,urdo; Tait, Crichie; Mitchell, Lairshill; Harper, wire merchant, Aberdeen; Glashan, Fawells; Durno, Jackston; Durno, Mains of Glack; Moir, Shadowside; William Black, Kinermit; and Bruce, Myreyon &c. The various machines exhibited were as follows:-Buckeye Banner, by Mr Alexander, Glasgow; the McCormick, by Mr William Reid, Aberdeen; Wood’s Standard, Wood’s Single Apron, The Brantford, and Brantford with front wheel, by Messrs Ben Reid & Co., Aberdeen; Bisset’s binder, with front wheel, by Messrs Cardno & Darling; and Hornsby & Son’s Royal Society Binder. Mr George Bruce, secretary of the society. Had all the arrangements for the exhibition carried out with his usual carefulness and foresight, and in his efforts to secure the success of the exhibition he was ably assisted by the following members of the Executive Committee:- Messrs Ranald Macdonald, convener; Strachan, Saphock; Grey, Balgove; Adam, land surveyor, who were assisted by Messrs H. Macgregor (of Messrs Harrison Macgregor), and Littlejohn, Whitemyres. At the outset the binders were tried on a field with a steep incline for the purpose of testing to the full their capabilities, and also with the view of allowing an opportunity to those in charge of the respective binders to explain the merits of their entries. After ample time had been given for this the machines were removed to a field of larger dimensions, where about half an acre was allotted to each. The work was accomplished in a creditable manner by each, the cutting being clean, the stubble left being comparatively short, and the time occupied being anything but prolonged. It would, however, be somewhat invidious to give details of the operations, more especially in view of the fact that the Executive had not at their command a dynamometer to test the draught of the various machinery. Suffice it to say that the satisfactory work in each case was favourably viewed by the spectators. Here it may be mentioned parenthetically that this is the first exhibition of the kind ever held in connection with the Royal Northern, and that it is the only one of the kind held this year in the kingdom. That the display marks a step in the right direction will not be doubted when it is remembered that agricultural implements are generally relegated to an inferior position in the showyards of live stock, and that consequently inventors and engineers do not get the place to which they are justly entitled in the agricultural world. In addition to the binders, several manure distributors were exhibited. These were the Strawsonizer, and a couple of machines invented by Mr Davidson, Mill of Clola. These implements commanded considerable and favourable attention. On leaving the field the executive and their friends adjourned to the Kintore Arms Hotel, where Mrs Annand purveyed an excellent repast. At the social board Mr Ranald Macdonald presided, and Mr George Bruce acted as croupier. On covers being removed, the loyal and patriotic toasts were pledged.

The Chairman then said it was very difficult, indeed, to exaggerate how much the farmer was indebted to the inventors and makers of agricultural implements. Without the aid of these, farmers would be very much handicapped. He went on to say they had implement makers in Aberdeen who were not only known in this country, but who were known all over the world. A good many of them present knew Mr George Reid, who was one of the originators of the firm of Messrs ben Reid & Coy, and he was glad to say that those who succeeded to that firm had kept up its reputation. (Applause)
He coupled the toast with the name of Mr Anderson, who replied.
The Chairman then explained that it was not the intention of the committee to publish a report. Mr Bruce had written to the Royal English Society for the use of its dynamometer, but it had not been sent, and consequently no fair criterion of the work could be obtained.
Mr Garvie gave “The Royal Northern Society”, and paid a high compliment to Mr Bruce for the great interest he showed in the affairs of the association.
Mr Bruce replied, and in doing so said the farmers in the district made his work easy by the interest which they took in the society’s affairs. He also referred to the kindness shown by Mrs Philip in granting the use of her fields, and to the trouble to which the grieve on the farm had put himself to make the exhibition a success. He begged to propose their health.
The sentiment having been pledged, other toasts followed, including the health of the chairman.”

Morayshire Farmers’ Club, trial of binders (from Aberdeen press and journal, 23 August 1897)
“On Saturday a trial of binders took place on a farm of Carswell, at Alves Station, under the auspices of the Morayshire Farmers’ Club. It is a great many years since a trial took place of reaping machines took place in connection with the club, and, of course, since the binders came into favour there has not been any competitions. The display undoubtedly provoked the greatest interest among the farmers, not only in the county of Moray, but much further afield, with the result that there was a very large attendance. Ten machines entered, bit it was found that three of them were duplicates entered by different agents, so that only seven were forward. Two Albions were entered for the competition. One of them was to have shown a sheaf carrier, but it was not put on. The three competing were the two Albions and the Adriance. They put themselves into competition for an award of merit by the judges. With regard to the other four they were merely only on exhibition, and a report is to be made by the judges to the club upon the merits of the different machines. The club will be entitled to make any use of the report afterwards.

The judges were:- Messrs R. C. Morton, C. E., Errol Works, Errol, Perthshire (mechanical experts; James E. Colvin, farmer, Manbeen; A. Trotter, farmer, Garguston; James Brown, farmer, Miltonhill; John Simpson, farmer, Spynie.
The field for the work was most admirable for the easy working of the machines. It was level, the soil was firm, and there were very few stones. The crop cut was oats. It was fairly heavy, and pretty even all over, while it stood beautifully up to the machines. In order, however, to have given the farmers an opportunity of seeing the machines work under adverse circumstances, it would have been well of some of it and been lying and twisted. As it was the conditions were so favourable in every respect that the machines were able to do their best work, and were not able to be shown under conditions which unfortunately not unfrequently occur through the untoward influences of high wind and wet weather upon a heavy crop. Neither was there an opportunity of witnessing how the machines-which, judging from their size, must be a considerable weight-would act in wet land where their weight would make them liable to sink. As it was the result of the trial will be a “boon in binders”. A good opportunity was offered for fine work, and full advantage was taken of it. All over the result was remarkably good, and there was nothing but praise on all hands as to what had been accomplished. The farmers watched the proceedings with the greatest interest, and not a few have resolved to have a binder. It was a good idea to have the trial so early, as those wishing to get machines can yet secure them in time for the bulk of this season’s work. All things considered the trial was eminently satisfactory, and the secretary of the club, Dr Black of Sheriffston, deserves the greatest credit for the excellent way in which he carried out the arrangements, along with a committee consisting of Messrs John Knight, Kintrae; Hugh Robertson, Balnageirth, Forres; Macall South, Shampston; and Maclkessack, Asleisk.
The following are the details of the entries:
Agent-Anderson & Bowie, Elgin-Albion Binder (2)
Agent- James Gray & Company, Stirling- Adriance
For exhibition
Agents-George Sellar & Sons, Huntly-Woods.
Agent-R. Forbes, Woodhead,-Bissets
Agent-George Bruce & Company, Aberdeen-Hornsby
Agent-W. Law & Company, Elgin-Massey Harris
The proceedings commenced at ten o’clock, and were concluded-including preparing machines for removal from one field to another, and cutting a piece in which they all followed each other-before two o’clock. The field was one of 40 acres, which was divided in the middle. About 20 acres altogether were cut. Each machine was allotted a plot of about two acres. The Bisset binder finished the work three minutes within the hour, and the others followed in quick succession. At the close, the judges stated that they had not yet prepared their finding as to the winner in the competition, and of course the report on those present for exhibition will be made to the club, so that meantime their findings cannot be made known. It may be mentioned that Messrs Ben Reid & Co., report a great demand for the Massey Harris, for which they are agents in the north. Three of them have just been supplied for three farms-Muirhead, Hempriggs, and West Grange-in the Forres district, and at present so keen is the demand that it is impossible to meet it.”