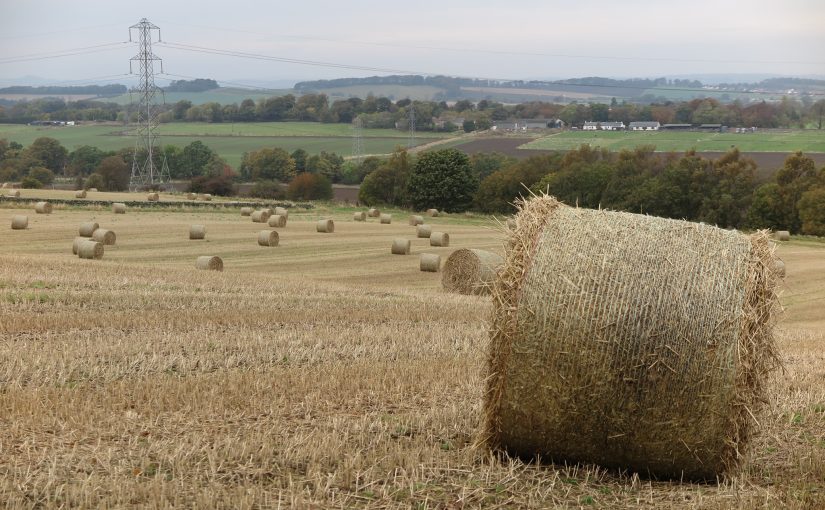 Harvest home used to be an important part of the farming year: it was a celebration at the end of harvest to celebrate its ingathering.

There were a number of traditions associated with the end of harvest. One was the cutting of the last sheaf. This was sometimes called the “clyack sheaf”. The Banffshire journal and general advertiser of 25 September 1900, noted the practice around this:
“At the close of the reaping the “clyack” feast was and still is held. The last sheaf of corn cut is known as the “clyack sheaf”. There used to be much rivalry amongst those on the harvest field with regard to this sheaf; for it was considered an honour to cut, gather, or bind it. At the feast the chief dish was the “meal and ale”, a composition of oatmeal and ale, into which a liberal supply of whisky had been stirred. This dish was partaken of by all, and the object was to secure a ring and button which had been secreted into the dish. The person who secured the ring was expected to enter the bonds of matriomony before the following harvest, or at least to be married before any of the unmarried persons partaking of the dish along with them. The individual who fished out the button was expected to be a bachelor or old maid. The feast was followed by song and dance.”

Even more important was harvest home, when all the harvest work, included all the stacking of the sheaves in the stackyard was completed. These were large festivities, continuing well into the night (or the wee hours), sometimes bringing together the workers and families on a number of farms in a district. Some farms were well known for their harvest homes. According to the Banffshire journal and general advertiser of 25 September 1900: “a liberal support was provided, and all made a merry night of it. This feast is a relic of very ancient times. There might be a week of such feasts, as every farmer in a district must celebrate the feast in his own account. These feasts after harvest are not so strictly observed at the present time as they were, but relics of them in a modified form still exist.”

Newspapers sometimes recorded the festivities at these harvest home celebrations. The following extracts are from newspapers in Banffshire from the 1890s when the practice and tradition of the harvest home was still strong, and an important part of the farming and social year.

Enzie-Cairnfield hravest home (Banffshire journal and general advertiser, 27 October 1891)
The annual harvest home festival at the instance of Mr and Mrs Gordon of Cairnfield in connection with the ingathering of the harvest took place with all the eclat befitting the occasion on Wednesday last. There was a large gathering, including all the servants and their friends, all of whom assembled in the commodious dining hall, where a sumptuous supper was served-presided over by the much respected farm manager, Mr Alex Dean, who, in happy terms, proposed the health of Mr and Mrs Gordon, which was duly honoured, and a similar compliment to both Master Stewart Gordon and Miss Emily Rose. The heartubess with which the toasts were responded to showed the genuine respect and admiration in which the genial laird of Cairnfield is held by the employees. About nine o’clock, the company-numbering 30 couples – adjourned to the laundry, which was beautifully decorated, and dancing was kept up with great enthusiasm to the “wee hours ayont the twal.” Excellent music was supplied by Messrs Grant, Buckie, and Dean, Homie. Songs and recitations were given by Johnston, Gordon, and Inglis. Mr Grant, Cairnfield, acted as master of ceremonies. Before parting, Mr Allan, Broom, in an appropriate speech, thanked Mr and Mrs Gordon in the name of the company for the liberal manner in which they had treated them. Three hearty cheers were given.

Alvah (Banffshire journal and general advertiser, 3 October 1893)
On Thursday evening, on the invitation of Mr and Mrs Livingston, about fifty couples met to celebrate the harvest-home at Newton of Mountblairy. The spacious loft at the farm was set in order for the occasion, and by nine o’clock the company was dancing merrily to the stirring strains of Messrs James Andrew R. Paterson, and Miss Ward, Hill of Mountblairy. The cheers given again and again, as the company broke up, testified to the esteem in which Mt and Miss Livingston are held in the district.

Aberlour – Harvest home (Banffshire journal and general advertiser, 31 October 1893)
On Friday night, Mr Findlay of Aberlour entertained all the hands about the farm, gardens, grounds, and estate workmen to an excellent supper and dance. Covers were laid for 100. Mr Findlay occupied the chair, and, after the usual loyal and patriotic yoasts, he proposed the employees on the estate, and stated that, taking them all over, he had reason to be highly satisfied with their services. Mr Alcock, factor for Mr Findlay, replied, and said that certainly they, the employees, were fully satisfied with Mr Findlay as employer, and that the servants of all kinds throughout the estate were so pleased that Mr Findlay, jun, was now almost recovered from the severe illness which he had. The other toasts were Mr Findlay, by Mr Fleming, banker; Mrs Findlay, by Provost McGowan; the Croupiers (Mr Duncan and Mr Bisset), by Mr John Sim; Mr Findlay, jun; by Dr Sellar. Dancing was carried on with great spirit up to about 1am. The young ladies from the house as well as Mr and Mrs Findlay graced the dancing-room with their presence for some hours.

Harvest home (Banffshire journal and general advertiser, 2 October 1894)
The annual harvest hone at Tochieneal was held on Friday evening. Dancing was engaged in and kept up with much spirit till an early hour in the morning to music by the Reidhaven Band, Cullen. Mr Henderson discharged the duties of MC.

Aberlour (Banffshire journal and general advertiser, 16 October 1894)
Harvest home at Aberlour Home Farm
The crop at the Home Farm was secured in excellent condition last week, and the annual harvest home festival was given by Mr Findlay to those engaged on the farm, to the estate employees, and some invited guests on Friday evening. About a hundred sat down to supper, which was presided over by Mr Findlay, who was supported by Mr Alcock, factor of the estates, Mr Bisset, gardener, and Mr Mitchell, grieve, acting as croupiers. After the loyal and patriotic toasts, the Chairman proposed that of the employees, stating that one and all had given entire satisfaction, and that the utmost good feeling existed between them. Mr Mitchell, grieve, briefly responded. Other toasts followed. Supper over, the party adjourned to the granary, where dancing was engaged in throughout the night to stirring music supplied by Mr McAdam’s band. Before breaking up, the company, on the vote of Mr Alcock, returned their hearty thanks to Mr Findlay for his kindness.

Harvest home at Miltonduff (Banffshire journal and general advertiser, 16 October 1894)
On Wednesday evening, the tenants and employees on the Miltonduff and Aldroughty estates were, along with a few friends, entertained to a harvest home at Miltonduff Distillery by Mr and Mrs Stewart, as, in some measure, a celebration of the recent marriage of the Laird of Miltonduff and Aldroughty. The occasion was regarded with feelings of the greatest enthusiasm by about 150 guests, who were pleased to have the opportunity of meeting their laird, Mr Stuart, and his young wife under such happy auspices. About nine o’clock Mr and Mrs Stuart arrived from Aldroughty House, and soon willing hands unyoked the horses and dragged their carriage, preceded by a piper playing a lively tune, to the scene of the gathering amid great cheering. On Mr and Mrs Stuart entering the ballroom, they were again received with much enthusiasm, and the dancing proceeded with renewed vigour to the stirring strains of Messrs Sutherland’s fine band, relieved at intervals by the bagpipes. Supper, purveyed by Mr Austin, Elgin, was laid out in another apartment. At supper, Mr Stuart occupied the chair and proposed the usual loyal toasts. Mr Cook, Muiryhill, proposed Mr Stuart’s health of Mrs Stuart being proposed by Mr Tulloch, Batehen. Both toasts were enthusiastically honoured. A very happy evening was afterwards spent.

Alvah (Banffshire journal and general advertiser, 10 October 1899)
Through the kindness of Mr and Miss Livingston, an enjoyable harvest home was held at Newton of Mountblairy on Friday. The servants were privileged to invite all their friends and neighbours, and the spacious loft was quite filled. Liberal refreshments were served from time to time during the dance, and on the call of votes of thanks loud and prolonged cheers were given to the kindly entertainers.

Upper Cabrach (Banffshire journal and general advertiser, 31 October 1899)
The Upper Cabrach harvest home ball was held in the school on Friday, when about sixty pupils were present and enjoyed a hearty dance, which was continued to the small hours of the morning. The arrangements, which were complete, were in the hands of a capable committee, including Messrs Alex Gordon, Gauch; William Bruce, Gauch; William Beattie, Powneed; William Kellas, Hillhead; J. Law, Post Office, Mr Beattie acting as secretary and MC. Excellent dance music was supplied by Messrs Gordon, Bruce, Gillan, Thomson and Nicol.

New Aberdour (Banffshire journal and general advertiser, 13 November 1900)
A large company met in the Parish Hall on Thursday to witness a cinematograph exhibition which was greatly enjoyed, Afterward a harvest home dance was held when excellent music was provided by Sim’s band from Strichen.