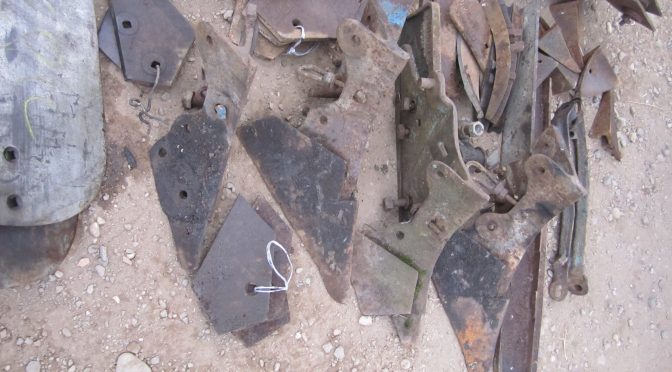 In the early nineteenth century there were a number of different types of ploughs used for ploughing. Generally, these were the Old Scots plough made of wood or partly of wood, and driven by a team of oxen or horses, and the new iron ploughs driven by a team. In Stirlingshire the different technologies was described by the surveyor of that county who was writing for the Board of Agriculture and Internal Improvement in 1811. He states:

“In the Highland district, the ancient barbarous manner of ploughing with four horses a-breast, and, besides the ploughman, a driver called a gamesman, walking backwards before the horses, holding a horizontal beam, to which they are all fastened, andbeating them in front in order to make them advance, may be still sometimes met with, to gratify the curiosity of the inquirer into ancient modes of agricultural practice. But even in the highlands, and universally in the lower districts of this county, the two-horse plough, managed by the ploughman alone, is now introduced.
The old Scots plough is still in considerable repute. It answers well for tearing up a coarse and stony soil: it sets up the furrow with a bold shoulder, so as to furnish abundance of mould for the operations of the harrow. Its disadvantage is, that it generally requires more than the power of two horses.

Small’s plough is at present almost in universal use in this county. Its excellencies are its lightness, and the form of the mould board, which s of cast iron, and which, rising from the share by an easy curvature, diminishes the friction and requires a smaller power of draught. This plough is universally used on the farms under the improved regime upon the Kilsyth estate of Sir Charles Edmonton. In the Carses of Stirlingshire, where agriculture is still in a great many instances in a very unimproved state, the Scots plough has not yet altogether given way to Small’s. It is there alleged by some, that Small’s plough, which by its construction is calculated to go deep, and which, if it does not go deep, lays the furrow over imperfectly, is apt to bring up the till which lies under the clay, and thus to produce a mischievous effect. When, however, the enlightened ideas and practice of some intelligent farmers in that district come to be better understood, it will be known that deep ploughing is the best; and that there is no risk in turning up the subjacent soil,which by inter-mixture with the superior strata, and alternate exposure to the light and frost, will soon become equally good with the rest.

Small’s plough is also called the chain plough, because at its first introduction it was drawn by a chain, passing under the beam, fastened immediately below the coulter, and connected by the muzzle at the ford. This chain is still used in some places; but is more generally disused, as affording little additional strength to the beam.
On this subject, it were to be wished that plough-wrights were better versed than they generally are in the common principles of mechanics; and that they had a better notion of the most advantageous method of turning over the furrow: that undoubtedly is the most perfect, by which the furrow is laid over at an angle of 45 degrees, exposing the greatest possible surface to the sir and to the barrow.
Levelling and drill ploughs are commonly used.”

The photographs were taken at the Scottish national tractor show, September 2014.