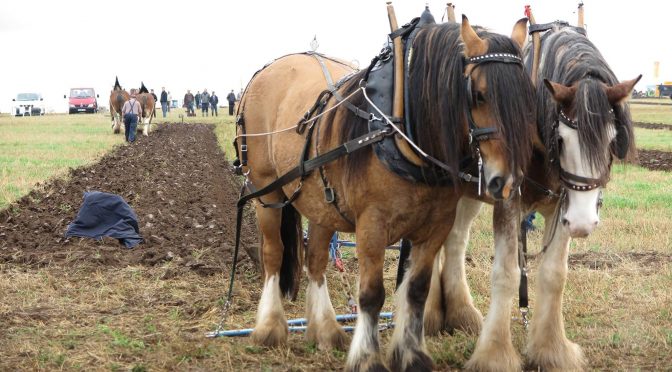 This weekend the Scottish National Ploughing Championships are being held at Kelso.

There are many aspects of ploughs and ploughing that have changed over the centuries. But there are also similarities as well. 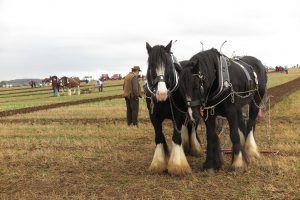 Robert Douglas, writing his agricultural survey of Roxburghshire in 1797 included a detailed account of ploughs and ploughing in the county. At that time there were a number of types of ploughs available. The key ones were the olden day ploughs, made or largely made of wood – the Old Scots Plough – and the new modern iron plough, invented by James Small of Blackadder Mount. The new ploughs provided a revolution in ploughs and ploughing. Douglas’ account of these is worth quoting at length: 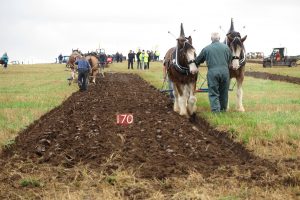 “The Scotch plough, with a long stout beam, and a long narrow point, though still used in stiff clay land, especially when it is to be broken up from grass, and even in light soil, when the furrow is interrupted by stones, has in general given place to the Rotherham plough, improven by Small [James Small]. The former is thought by some to expose a larger surface to the atmosphere, by which the soil, when harrowed, admits of a finer pulverization; but the latter is allowed to make a nearer furrow, as well as to loosen and turn up more earth from the bottom. It is commonly made exactly to Mr Small’s model, with this difference, that the beam is two, and sometimes even four inches longer. The moulds (or mould-boards as they are termed) of cast metal, recommended by the Dalkeith Society of Farmers, are much used; and the head or peak, instead of being covered with plates of iron, is not infrequently made wholly of it, or of cast metal. The shath too or sheath, including the head or peak, is sometimes one entire piece of cast metal. Opinions differ with respect to the structure of the muzzle. All ploughs have a rod of iron, doubled so as to embrace the beam either 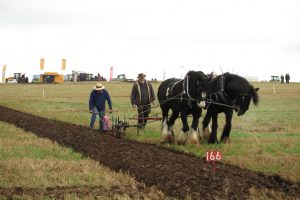 perpendicularly or horizontally, with four or five holes in that part of it which crosses the point of the beam, in one or other of which the harness is fixed. This bridle, as it is here called, moves upon a strong pin piercing the beam, about four or five inches from its point in some ploughs, and in others about fifteen or sixteen inches. In the former case, the bridle is placed horizontally, and has a long tail, by means of which, the depth of the furrow can be regulated. In the latter case, a piece of wood, with four or five holes in it, is fixed to the end of the beam, sometimes in a horizontal direction, to regulate the width, and sometimes in a perpetual direction, to regulate the depth of the furrow, by means of the bridle, which is always placed the opposite way from the piece of wood. This structure is preferred, as making the draught more steady. And some use a chain, partly to strengthen the beam, and partly to assist the movement of the plough, in very stiff soil, by the shake which it occasions. 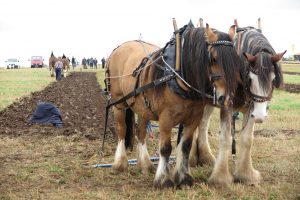 The plough is drawn by a strong stretcher, commonly called a two horse tree, with an iron staple in the middle, and a hook in it to go into one of the holes in the bridle, and with two iron ends, in each of which there is a hole to receive a smaller hook, coming from the middle of two lesser stretchers, or single horse trees, to whose extremities the ropes were formerly tied, and now the chains are fastened, which reach from both sides of the collars of two horses placed abreast.”

The photographs were taken at the Scottish Ploughing Championships in 2016.