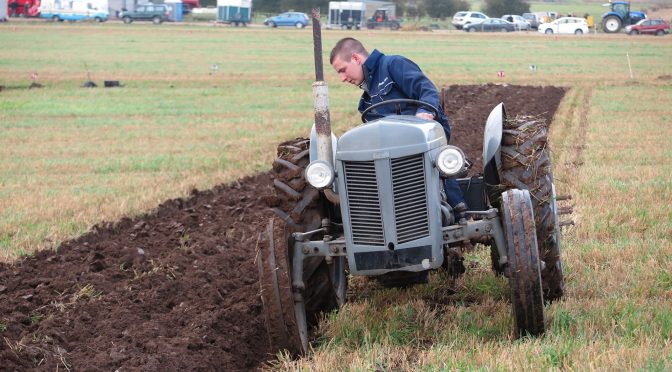 George Somerville, surgeon in Haddington, wrote the General View of the Agriculture of the County of East Lothian for the Board of Agriculture. It was published in 1805. The volume was part of a wider survey of agriculture and general economy of each of the counties in Britain. Each volume was written according to a plan so that the volumes could provide a systematic view on each topic. The plan included the topic “implements and machines”.

Somerville provides some interesting insights into the tillage implements used in East Lothian up until 1805. It is worth quoting at length:

“Till within the last 30 years, the Scotch plough, generally speaking, was the only one in use; it was of large dimensions, and required the strength of four horses to do ordinary work: in not a few instances two more were added. That implement was succeeded by one, constructed something like the Rotheram plough, which was afterward amended, by the late Mr James Small of Ford.
This plough is provided with a mould board of cast metal, constructed in such a manner as to make less resistance than any other hitherto tried, and is universally drawn by two horses. The price is from 2l 10s to 3l fully mounted.

The harrows commonly used are of two kinds, viz the large brake, worked with two horses, and the common small harrow, worked by one. The brake is so constructed with joints, as to bend, and to accommodate its shape to the curvature of the ridges: it is chiefly employed upon strong lands, especially fallows, and upon soft lands, where the furrow is much bound with couch grass, or other root weeds: the small harrows are afterwards used with advantage, and at once complete the pulverization of the soil, and separate such of the root weeds as have escaped the brake. Where the land is clean, and the soil sufficiently reduced, the brake is very seldom used for covering the seed, the common harrow being found fully adequate to that purpose. This implement appears susceptible to considerable improvement; the number of teeth may certainly be increased with advantage, and the direction of the draught so much altered as to give them greater effect, by making more ruts.

Roller-Rolling is practiced in the county to a certain extent, both in reducing the soil before sowing, and upon the young crops, both of corn and grass. When conducted with judgement, the practice is highly useful, and admits of being considerably extended, especially upon all winter crops, after severe winters, and that without any regard to soil, as both loams and clays, after much naked frost, have their cohesion so much broken, as to leave the plants quite loose and almost without any establishment. Rollers are chiefly of stone or wood, and in a few instances of iron. Where wooden rollers are used, they often have a box upon the top for holding stones, for the purpose of increasing their weight, when it is found necessary. Both wood and stone rollers have a fault, which, when they are used upon growing crops, is considerably felt; in turning short, the motion round the axis is nearly lost, and the implement, by that means, in place of rolling round in the manner it does when drawn straight forward, comes round, in the same manner as if it had no axis, and in that way both the plants and soil are drawn along with it. This defect is completely remedied, by having the roller in two pieces to move round a common axis; most of the cast iron ones are of this construction: in turning, one end of the roller is drawn forward, while the other is rolled backward, and the soil and plants left uninjured.”

The photographs were taken at the Scottish ploughing championships, East Lothian, 2016.