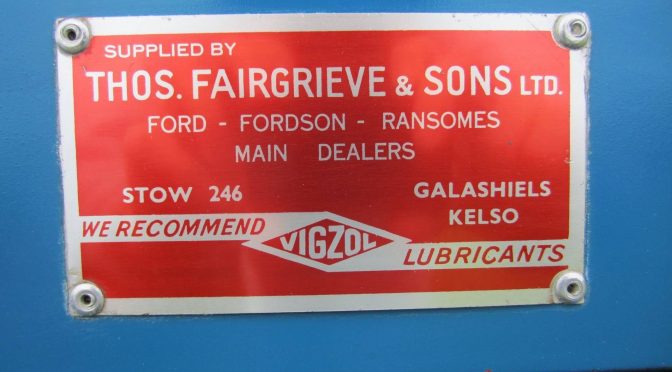 As well as the larger implement and machine makers in the towns, cities and some larger villages, there were a large number of small businesses scattered throughout rural Scotland which served the farming community with implements and machines or repaired them. They included engineers, millwrights and smiths. Over time, some of them also started to stock a small number of implements and machines from other makers, and acted as local agents, a role that could transform their businesses.

One of these businesses was Thomas Fairgrieve, a millwright, engineer and cycle agent at the Cockholm Works, Stow, Midlothian. By 1914 Thomas was joined by his sons in his business, which became known as Thomas Fairgrieve & Sons.

The business made significant changes to its operating structure in 1938 which led to a change of name to Thomas Fairgrieve & Sons Limited. The company’s memorandum and articles of association provide information about its activities.

These are worth quoting:

“The objects for which the company is established are:
(1) To carry on in Scotland and elsewhere the business of motor, electrical, mechanical, constructional and general engineers and merchants, agents for and dealers (wholesale and retail) in every kind and description of motor and other vehicles and appliances, water and aircraft, and appliances and utensils, accessories, requisites, implements and articles for use in or in connection with such businesses.
(2) To carry on the business of motor garage proprietors, hirers, repairers, carriers of passengers and goods, contractors, general agents and technical constructors in the use of all motor vehicles and their appliances.
(3) To carry on the business of manufacturers of, agents for, dealers in, makers and repairers of all classes of new and second-hand machinery, fittings and apparatus.
(4) To carry on the business of manufacturers of, dealers in, hirers and repairers of wireless apparatus, electrical apparatus and appliances, television apparatus, receiving sets, transmitting sets, and all apparatus for the reception or transmission of wireless wares.

(5) To buy, sell, let on hire, repair, alter, and deal in implement parts, accessories and fittings of all kinds for wireless apparatus and all articles and things referred to in (3) here or used, or capable of being used, or capable of being used in connection with the manufacture, maintenance and working thereof.
(6) To buy, sell, manufacture, repair, hire, deal in oils, and other metals or minerals, machinery, plant, implements, tools, and other material, apparatus, appliances, articles etc.
(7) To carry out the objects of the company as principals, agents, trustees, or otherwise etc.

The company continued to operate until the mid 1970s.

The photographs were taken at the Borders Vintage Rally, Kelso, May 2014.