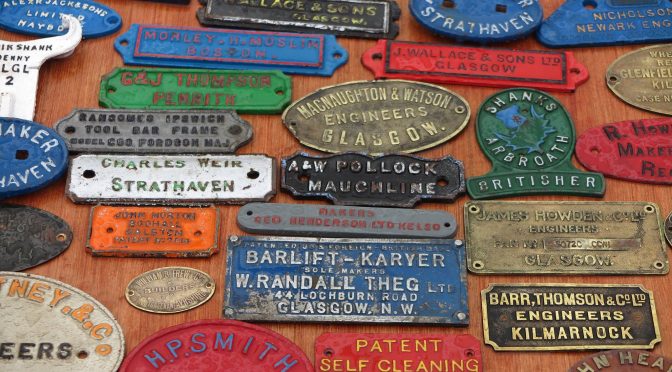 In 1890 the Scottish agricultural implement makers had an industry association – The Scottish Agricultural Engineers’ Association – which looked after their interests. The association held an annual meeting at the time of the Highland Show. The following is an account of its meeting in 1890. It provides information on their activities, membership, as well as progress made in recent decades.

“This Society held its annual meeting in the showyard of the Highland and Agricultural Society at Dundee last week. The annual report was laid before the meeting by the secretary, who reported that the Society had, financially, made good progress during the year. In the election of office-bearers, Mr W. Anderson (of Ben Reid & Co., Aberdeen), was re-appointed president, and Provost Marshall (of Jack & Sons, Maybole), was elected vice-president. A special resolution was passed, expressed regret at the resignation of Mr J. M. McLeod from the office of vice-president. Mr McLeod, who has been so long and honourably connected with the form of Messrs Nicholson & Son, of Newark, retires having been recently appointed secretary of the Royal Masonic Institution for Boys, London. He carries with him the good wishes of all the members of the Scottish Agricultural Engineers’ Association, in whose interests he has faithfully laboured since its foundation.

The annual dinner of the Association was held on Tuesday, 29th July, in the Queen’s Hotel, Dundee. About forty gentlemen sat down. The chair was ably occupied by Mr W. Anderson, of Ben Reid & Co., president of the Association, and Mr J. M. McLeod was croupier. Amongst others present were-Mr Wm Wallace (Glasgow), Provost Marshall (Maybole), Mr J, D, Allan (Dunkeld), Mr Duncan (Murray & Blake, Banff), Mr Baxter (Aberdeen Lime Co.), Mr Turnbull (Carnock), Mr Elder (Berwick), Mr Hunter (Maybole), Mr Sinton (Jedburgh), Mr Pollock (Mauchline), Mr Jones (of J. & F. Howard, Bedford), Mr Du Pont (Walter A. Wood, London), Mr Samuel Edwards (Crowley & Co.), Mr W. Mather (Nicholoson & Son), Mr Harrison (Leigh), Mr Woodroffe (Rugeley), Mr Segar (Hornsby & Sons), Mt Barlord, Mr Waide (Leeds), Mr J. D. Sims (Ipswich), Mr Holden (Leigh), Mr Hattersley (Aylesbury Dairy Co.). Mr Thomas Smith (factor on Cluny estates), Mr R. Macdonald (factor on Ailsa estates), Mr C. Anderson, of N.B. Agriculturist.
Following the usual loyal toasts, the Chairman (Mr W. Anderson) proposed “The Scottish Agricultural Engineers’ Association”. He alluded to the fact that he felt popular pleasure in giving this toast, as he had been connected with the Association from its formation, twenty years ago, and during that time he had attended the shows of the Highland and Agricultural Society without a break. He rejoiced to say that the Association had done good work, and he looked forward to greater achievements in the future. The progress and improvement in machinery had been marvelous, and he would take the opportunity of reminding the members that special interest attached to their visit this year to Forfarshire, which was the cradle of that most valuable invention in agricultural machinery – the reaping machine. After a few remarks as to the use that agricultural journalism has rendered to manufacturers of machinery, he threw out the suggestion which, he trusted, would be well received by the members of the press, that the trade in Scotland should have a journal specially devoted to their interests. He felt sure that implement makers would willingly support a monthly periodical which would be exclusively confined to the discussion of matters in which they were interested. In proposing the toast of their Association, he would couple it with the name of Mr McLeod.

Mr Mcleod, in replying, said he did not think he merited the honour of responding to this toast, and presumed that it fell to him to do so merely from his position as croupier. He was always glad to meet so many good friends from all parts of the country; and it always gave him pleasure to be present on these occasions. He then briefly touched on the work of the Association, and took the opportunity of informing the uninitiated that their affairs were continuing to prosper.

Provost Marshall, of Maybole, proposed, “The English Agricultural Engineers’ Association”. He humorously alluded to the respective merits of English and Scotch makers, and rejoiced that they all met together on such occasions in a friendly and brotherly spirit. Mr Samuel Edwards, of John Crowley & Co., briefly replied on behalf of the English manufacturers.
Mr William Wallace, of Glasgow, proposed the important toast of the “Highland” and other Societies”. He strongly deprecated the site which the Society had selected for this year’s show, and trusted their Association would represent the matter to the Society in a forcible manner. He then pointed out the large field open to such a Society as the highland in furthering plans for benefitting the condition of the agricultural labourer, especially in the direction of having proper accommodation for labourers with large families. He coupled with the toast the name of Mr Ranald Macdonald, factor on the Cluny estates, who replied at considerable length, giving interesting details as to the position of the crofters whose families at one time supplied many agricultural labourers for the lowlands.
Mr Woodroffe of Rugeley, in a few witty remarks, proposed “The Ladies”, to which Mr Sims, of Ipswich, replied.

Mr Du Pont, of the firm of Walter A. Wood, in a highly laudatory manner, proposed “The Press”, and pointed out the benefits that such Associations as the Scottish Agricultural Engineers derived from skillfully conducted agricultural journals. Mr C. Anderson, of Messrs C. and R. Anderson, proprietors of the N.B. Agriculturist, briefly returned thanks for the very flattering remarks that had been made, and trusted that in the future they would continue to merit the good opinion they had held in the past.
At intervals throughout the evening Messrs Jones, Marshall, Dupont, Edwards &c, favoured the company with some admirable popular songs and the singing of “Auld lang Syne: concluded a very enjoyable meeting.”