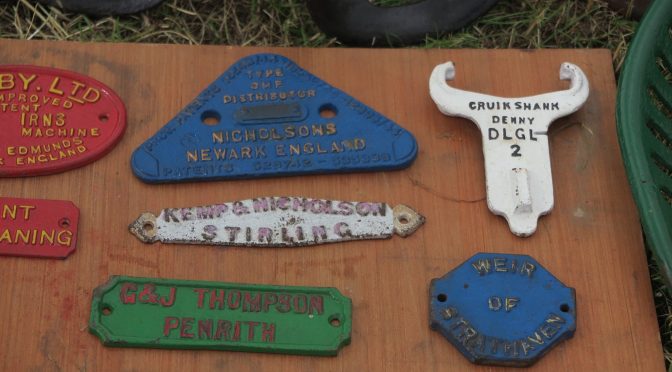 A familiar name in Scotland, and indeed across Scotland until 1930 was Kemp & Nicholson of Scottish Central Works, Stirling.

The company conducted business from its premises in Dumbarton Road, Stirling, as Kemp, Murray & Nicholson, in 1858. It had further business activities further east in East Lothian. The North British Agriculturist in November 1858 stated that “Kemp, Murray & Nicholson have removed from their branch establishment, Haddington, to their headquarters in Stirling where they have been in business for the last 10 years and where their business will henceforth be exclusively carried on.” By 1859 the company described itself as agricultural implement manufacturers, though by 1870 it had expanded its range of trades to be joiners, agricultural implement and reaping machine makers and engineers, activities that it became renowned for in the following decades.

In the summer of 1884 the company moved premises to Cow Park in Stirling. It announced the move in the North British Agriculturist, the Scottish national farming paper of the day.
That notice read:

“Notice that Kemp & Nicholson, agricultural engineers, beg to tender thanks for the liberal patronage which they have received during the last thirty-five years, and have pleasure in announcing that they have now removed to the new and more commodious works at Cow Park Siding (adjoining the Goods Station of the North British Railway), and with the increased facilities they now possess, parties favouring them with Orders may rely on having them executed with promptitude and dispatch.
A varied stock of farm implements and machines always on hand and in course of manufacture, including reapers, and mowers, horse rakes, grubbers, harrows, land rollers, turnip sowers, cart wheels and axles, corn dressing machines, oil cake mills, sheep fodder racks. Food cooling barrows, lever turnip slicers, &c. inspection of which is respectfully invited.
Priced catalogues post free on application. Address, Kemp & Nicholson, Implement Works, Stirling, 10 June 1884.”

That newspaper sent one of its journalists to visit the new premises. It published a substantial account:

“Prominence is this week given in our advertising columns to an intimation of the removal of this well-known Stirling firm of implement makes from Dumbarton Road to a spacious new building in what is know known as Cow Park Siding. The plan of their new buildings-covering about an acre-notwithstanding the great magnitude of the business, already gives room for all that can be required for its expansion for many years, while within the area now occupied it gives space for the different branches of trade which the firm takes up. The main building, situated on the north side of the new roadway leading from Shore Road to the north-west, consists of a large oblong building divided by six rows of pillars, but the different sections of which are occupied by various classes of workmen. The building measures 103 by 78 feet within walls, and the “shops” into which it is divided by the pillars have a floorage of 75 by 25 feet each. Ample accommodation is available in the building for allowing all the different classes of work in connection with the manufacture of implements to be carried on simultaneously. On the opposite side of the roadway are situated the engine-tore, and coal-house, in a two-storey block 40 feet by 30 feet. The 14-horse power engine drives all the machinery of the workshops and the fans for the smith’s fires, and the other apartments are furnished with finished work and with the raw material for further work. The works of Messrs Kemp & Nicholson are most conveniently situated for the transit of goods, and when the projected siding to the adjoining railway is completed, their position will be second to none in this respect. At present all the departments of their works are fully occupied, and their trade, which is not one liable to fluctuations, seems to be a happy exception to the slackness generally prevailing.”

That account is one of the very few ones that describe an implement works. The company remained in these premises until it ceased business shortly after the death of Major Kemp Smith in March 1930.