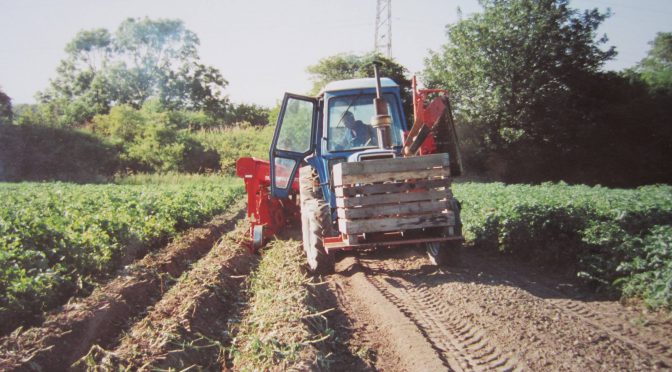 The harvesting of early tatties underwent huge changes during the twentieth century.

The early crops were traditionally harvested by migratory squads from Ireland, especially from the counties of Mayo and Donegal who moved throughout the early potato districts throughout Scotland.  They started their work in the southwest, in Ayrshire and Wigtownshire, to harvest the earliest ripening crops before progressing eastwards to the Lothians.

After the early crop was harvested they continued harvesting activities throughout eastern and central Scotland until the until the main crop was harvested at the end of October or into November.  They then dressed the crop throughout the winter months.  So important was the contribution of the Irish migratory potato workers to the harvesting of the early crop that they were closely associated with it. 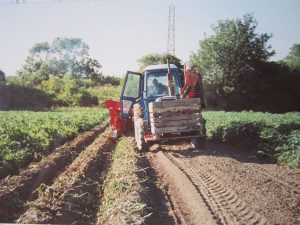 The Irish migratory potato works came over to Scotland in squads, headed up by a gaffer or ganger who recruited them in the home district of the workers.  They largely comprised women and teenagers, with a number of men employed to undertake the heavier tasks on the harvesting field.  The squads, numbering usually around 20-30 workers harvested the crop by hand, or with the potato graip, for much of the twentieth century.

The workers, worked in pairs, or graips, to gather the crop.  One, usually a male, dug the crop, while the other, a woman, gathered the potatoes that were uncovered by the digger.  In essence, the digger worked backwards and the gatherer forwards.  The crop was usually graded or sorted in the fields and the potatoes, in barrels, taken straight from the field to be sold at market.

The digging of early potatoes by hand or graip continued until after the Second World War.  Also employed was the potato plough which made the job of separating the potatoes from the soil easier and less labour-intensive to undertake.  Spinner diggers were starting to be increasingly used.

The photograph of harvesting early potatoes was taken at Pilmuir Farm, Balerno, Midlothian, in the 1990s.