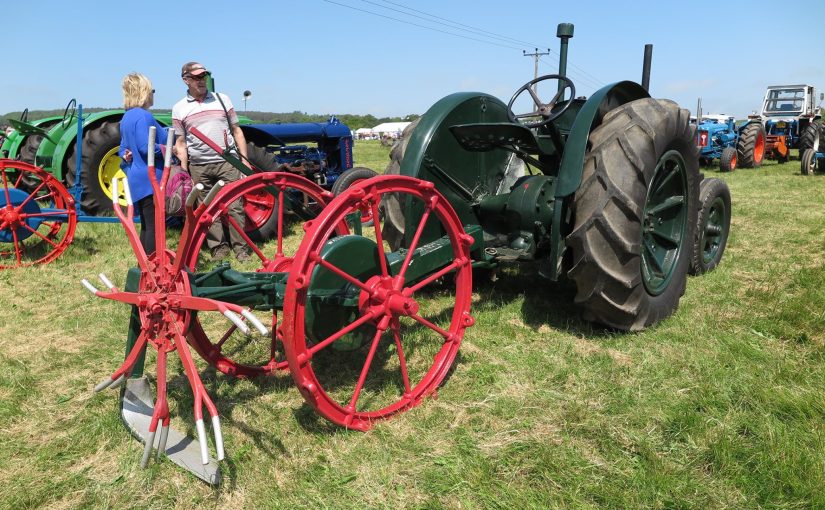 The world of potato harvesting was changed in 1855 with the development of Mr John Hanson’s potato digger. In essence, this was the forerunner of the potato spinner that became the most widely used machine for digging the potato harvest until after the Second World War. Mr Hanson’s machine was the subject of a number of trials in that year and in the following ones. While it was seen to have both advantages and disadvantages over the potato plough, in following years it started to become more widely adopted and seen as an important machine for the raising of the crop.

The following newspaper articles set out the different phases of the introduction of this important machine, from the early trials, through to its early adoption and more widespread used and acceptance by farmers:

Potato digging machine (Fifeshire journal, 15 November 1855)
A trial of a potato digging machine took place on the farm of Athelstaneford, New Mains (Mr Douglas’), on Monday last. The machine is invented and patented by Mr John Hanson of Doagh, Belfast. There were a number of the agriculturists of the neighbourhood present, among whom were Mr George Hope, Fentonbarns; Mr Robert Scott Skirving, Camptoun; Mr Reid, Drem; Mr Oliver, West Fortune; Mr Scott, Beanston; Messrs Tod, Castle Mains; and Mr Binnie, Seaton Mains. The day was good, and the machine, under the superintendence of the inventor, progressed steadily-digging one drill at a time, and scattering thoroughly out the tubers. The work was very satisfactorily done, few, if any, of the potatoes being injured or left unexposed by the process. The machine is of very simple, although of ingenious construction, and is worked easily by a pair of horses. It has a broad sock or elevator for penetrating the drill and raising the dung and tubers, which are scattered out regularly to the right by the revolving plate at the end of the machine, to which are attached forks. The motion of the sock us got by the draught; the other by two bevel wheels on the axle of the wheels of the carriage, which give motion to the revolving plate; it has also attached a screen or guard for confining the scattering of the tubers to a space of three or four feet, which allows of their being gathered with greater facility. In digging with this machine it is not necessary to cut or pull the tops of the potatoes, which forms such a formidable item of expense when taken up to prepare for the plough. Considering a very efficient job can be made of 2 ½ Scotch acres of crop per day by a pair of horses with ease, Mr Hanson’s potato differ cannot but be regarded as a great auxiliary in potato lifting. – North British Agriculturist

Trial of Hanson’s potato-digger at Earnside (Inverness courier, 14 August 1856)
A trial of this newly-invented implement for lifting potatoes, was made on Mr Kay’s farm, at Earnside, on Saturday last, The machine is drawn by a pair of horses, with a draught about equal to the common plough. The wheels, about three feet high, run one on each side of the drill that is to be dug up. An iron plate fixed like the sock of the common drill harrow passes under the drill when the machine is set in motion, and a prolonged wheel with twelve spokes strikes the loosened drill cross-wise and throws the potatoes and earth to the right side, leaving the potatoes exposed on the land. The experiment was completely successful, and a number of the agriculturists who were present expressed their satisfaction with the result, and orders were given to the patentee for several of the diggers. The machine will dig about three acres per day, and when in fiull operation will require twelve hands to glean after it. – Forres Gazette

Early introduction and use

Perthshire (Fife herald, 12 November 1857)
Hanson’s potato diggers have been at work in the district; but the large anticipations of their utility are scarcely being realized. Besides the excessive draught, the necessity of gathering, before the return of the machine, the scattered crop of each drill tossed over a yard or two is found to be inconvenient, whether as regards the needful superintendence or the proper arrangement of carts. The saving of the gatherers’ finger-ends is doubtless considerable; but the saving of expense if doubtful.

More general use and acceptance

Article from the Mark Lane Express on harvesting the potato crop (Orkney herald, 20 October 1863)
… Hanson’s potato-digger is a very effective machine for casting them abroad out of the rows; it also at the same time does good service to the soil, by throwing abroad the row so effectively that all is spread ready for the harrow, and not a semblance of a potato row is to be discerned. The chief drawback to its more general use if the heavy draught; it can scarcely be properly worked by a pair-horse team throughout the day; otherwise, it is most effective.

The best method of lifting and storing the potato crop (North British Agriculturist, 9 October 1872)
At the monthly meeting of the Haddington Agricultural Club, held on Friday last … Mr Douglas said “It is generally very well understood by the growers in this country, judging from the experience they have had in the matter;” but he believes that, of the modes for lifting potatoes, “Hanson’s potato-digger is the cheapest and best.” The principal objection to Hanson’s digger is its weight, as it almost always requires three stout horses, yoked abreast, to work it. There are, however, improved potato-diggers on the same principle as Hanson’s, which are less oppressive to the horses.”

When you see potato spinners in preservation, think about the importance of the Hanson potato digger which provided a strong impetus for the development of mechanical potato harvesting in the second half of the nineteenth century.