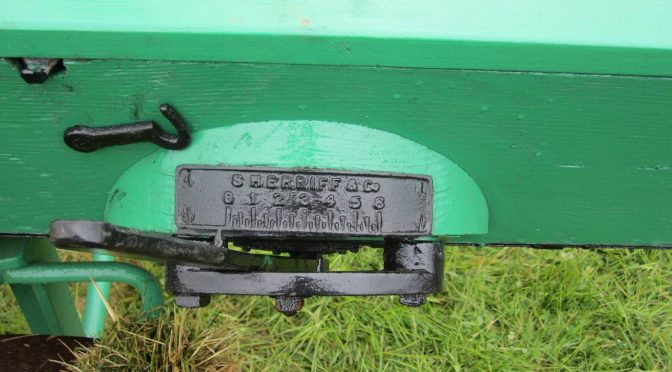 There are a number of accounts of implement and machinery works being destroyed by fire from the mid-nineteenth century onwards. Some of them provide insights into the buildings and implement works that played an important role in the making of implements and machines for the Scottish farmer. Others give details of the men and managers.

A number of these accounts are worth quoting for the details it provides about the businesses that were affected by destructive fires:

Fire at West Barns Implement Works, Dunbar, September 1866
“On Saturday evening, a fire of a somewhat alarming nature took place at the agricultural implement works, belonging to Mrs Sherriff, at West Barns. The premises, which are pretty extensive, consist of a double range of workshops and other offices running back at right angles from the highway passing through the village, and, with the dwelling house filling up the farthest extremity, form nearly three sides of a square. The fire broke out in one of the workshops at the northern extremity of the range of buildings on the west side. The lower flat was occupied as a smithy, and the upper as a joiners’ shop, in which, in addition to the usual inflammable articles, were kept the oils and paints used in the business. The town’s engine was immediately set to work, and the flames were subdued. It is not known how the fire originated. The men leave off work at two o’clock on Saturday, and when the manager, Mr Robertson, went round some time after that, there was no appearance of anything wrong. The loss is not exactly known, but it must be considerable. Besides the tools and materials in the joiners’ shop, there was a large collection of patterns, and wood ready dressed for the manufacture of the sowing-machines and other implements, for which the firm is well known, all of which have been destroyed. The loss is partly covered by insurance.”

Fire at Uddingston Iron Works, Uddingston, Lanarkshire, April 1875
A most destructive fire occurred yesterday afternoon at the well-known agricultural implement establishment of Messrs John Gray & Co., Uddingston Iron Works. The works, which are situated immediately adjoining the Uddingston station of the Caledonian Railway, are very extensive-the ground feed by the firm for their general use extending to four acres, and the buildings covering an area of two acres. These are erected in six parallel rows-the foundry being in the rear, and the pattern store, engineer, blacksmith, and joiners’ shop and offices lying to the front, and a series of sheds and stores running at right angles towards the main entrance to the works from the public road. Shortly before one o’clock one of the apprentices noticed flames bursting from the roof of the pattern store; and the intelligence having been immediately conveyed to Mr Bennet, the manager, the workmen turned out with a view to staying the progress of the fire, The wind was, however, blowing strongly from an easterly direction; and all efforts to extinguish the flames proving futile, endeavours were made to empty the buildings of their most valuable contents, which were, however, only partially successful. The fire spread to the engineer shop and to the drawing office-three steam and several hand engines being wholly destroyed. The flames almost simultaneously communicated with the adjoining counting house, show-room, and engineer shop beneath. Fortunately, the show-room was not so largely filled as it usually is, and the agricultural implements it contained were secured, as were also the books of the firm and other contents of the counting house. The flames, passing a smith’s shop in a line with the counting house, next caught another range of buildings to the left, consisting of a store, paint shop, joiners’ shop, &c; and from the inflatable nature of the materials it contained, it was also entirely gutted, but luckily not before the contents were secured. A telegram having been forwarded for assistance to the Glasgow Fire Brigade, and a messenger despatched to Hamilton, an engine from each of these places was on the spot about two o’clock, along with several members of the Glasgow Salvage Corps. By this time, however, the firs had done its work, and the operations of the engines were confined to the pouring of water on the burning embers and preventing them blowing on to the property which had been saved. The loss is insured to the extent of £6000; but although no estimate has yet been made up, it is believed this sum will hardly cover the actual damage sustained. In addition to the personal loss and inconvenience caused to Messrs Gray, the workmen will also suffer, as, to the number of 200, they are thrown idle.

Fire at Benjamin Reid & Co., Aberdeen, August 1889
“Damage to the extent of about £2000 was caused by fire which occurred early this morning in the work premises of Benjamin Reid & Company, implement makers, Justice Mill Lane, Aberdeen. In spite of the efforts of the Fire Brigade a considerable quantity of machinery was destroyed, including vertical and planing machines and several vices. The fireman at the works prevented an explosion by having opened the valve of the boiler. A building with inflammable material attached to the burning premises was untouched.”

Fire at Castle Douglas, May 1911
“An outbreak of fire occurred at the implement works of Mr James Gordon, King Street, Castle Douglas, on Friday night. The fire was confined mostly to the engine shed, in which were several barrels containing paraffin oil. These became ignited, and for a time the fire seemed to have a complete mastery, and the whole workshop was in imminent danger. the flames leapt to the roof, which was entirely composed of glass, and the glare attracted a large crowd. After much exertion the flames were got under, but not before considerable damage was done, the large engine shed and glass roof of an outer building being demolished. The damage is covered by insurance.”

Fire at Messrs Barclay, Ross & Co., Aberdeen, May 1920
“Their first call was in the early morning to a destructive blaze at Craigshaw, just beyond the city boundary at Torry, damage being done to the premises and stock there of Messrs Barclay, Ross and Hutchison, one of the best known firms of agricultural implement makers in Scotland, to the amount of about £6000.
The Craigshaw outbreak was observed between two and three o’clock in the morning, and it was only after about five hours’ hard work on the part of the members of the Fire Brigade that the flames were got under. The premises, which are situated close to the railway line, consist of a large range of buildings, including a corrugated iron structure 150 feet long, 30 feet broad, and 14 feet high, and a stone and lime erection 100 feet long and 40 feet broad. The corrugated iron building was practically gutted, while the other, particularly at the south end, was badly damaged. The buildings included a millwright’s shop, stores, offices, blacksmith’s shop, engineer’s shop, dressed wood store etc.
It is not known how the outbreak originated, but it is thought to have started in the paint shop. The signalman on duty in the railway cabin beside the railway bridge at Craigshaw was the first to observe the outbreak. He immediately telephoned for the fire brigade, which was promptly on the scene, under Fitremaster Inkster. By the time the brigade arrived, however, the flames were bursting through the roof of the corrugated iron building, and by three o’clock the erection was practically ablaze from end to end.
The firemen devoted their energies to preventing the flames from spreading to the stone and lime structure. They were successful in saving the north end, but at the other end, which adjoins the corrugated iron building, the flames did considerable damage. It was not until seven o’clock in the morning that all danger was past. Two telegraph standards were badly damaged.
The works at Craigshaw were the largest of their kind in the north of Scotland. Threshing mills, manure distributors, oil engines, and a variety of other agricultural machinery and implements which were being prepared for the exhibition in the showered of the Highland and Agricultural Society at Aberdeen in July were destroyed.
The damage is covered by insurance.”

These are revealing accounts of a number of implement and machine makers, though revealed through unfortunate circumstances.