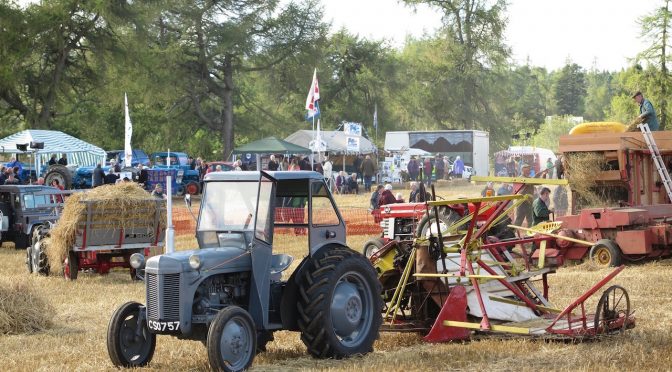 Who were the English companies that exhibited reapers at the Highland Show in the late 1850s until 1910?

There were 58 English exhibitors that displayed reapers at the Royal Highland Show from 1858 to 1910. A significant number of them exhibited at only one or two Shows and show districts. This gave them a local to a regional presence in Scotland. Some also attended the Show over a longer period, also visiting a number of show districts. Some 16 exhibitors attended more than 6 shows. One of them, R. Hornsby & Sons, Grantham, did so for 39 shows. Those exhibitors that exhibited in all 8 districts sought out and established a national presence in Scotland: they were manufacturers that had a national and international reputation for their reapers including H. Bamford & Sons, Uttoxeter, Brigham & Bickerton, Berwick on Tweed, Harrison, McGregor & Co., Leigh, Manchester, R. Hornsby & Sons, Grantham, and Picksley, Sims & Co., Leigh, Manchester and Samuelson & Co., Banbury.

The show districts adjoining the Scottish-English border – Kelso and Dumfries – each had large numbers of English exhibitors and were ranked second and fourth for the exhibition of reapers by English exhibitors, higher than those for the Scottish exhibitors of reapers, and those assigned by the Royal Highland and Agricultural Society of Scotland. They were the most easily and readily accessible districts, as exhibitors located in the north of England had only a short distance to travel to exhibit their machines. Some of them also used the Show as part of their circuit of agricultural shows during the summer months, and did not make recourse to it in any other year: Andrew Thompson, Berwick on Tweed (1863), and Moffat & Robertson, Cornhill on Tweed (1880), only exhibited at the Kelso Show while William Trotter, Newcastle (1860), and Thomas Reay, Carlisle (1903), only exhibited at the Dumfries Show.

Despite the growing importance of American and Canadian machines, especially from the 1890s, only 16 English exhibitors displayed their machines. They did so for a small number of manufacturers, exhibiting their machines at a few shows exhibited American machines at only one show). The Canadian and American manufacturers were to pose a significant challenge to the English manufacturers. Only the English companies could compete with the American makers up to the 1880s, when they too were driven out of the market’. Their pattern of exhibition contrasts with the 76 Scottish exhibitors of these machines.

The photographs were taken at the Strathnairn Rally, September 2016.