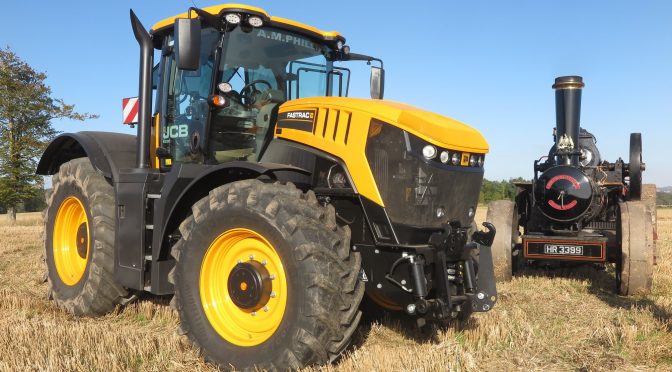 The last time that steam ploughing was carried out in Perthshire was at the Morris Leslie vintage event at Balbeggie, Perthshire, at the weekend. Before that the county probably had not seen steam ploughing for at least a century. In Fife the contractor Sam Hird, originally from Kincardineshire, had purchased engines in 1925 and were amongst some of the last pairs in Scotland. Others were recorded in Ayrshire in 1925 for a couple of years. In East Lothian there continued to be some steam ploughing into the 1950s.

In Perthshire there was not a strong tradition of steam ploughing. Its practice can be traced back to the beneficial work of Lord Kinnaird of Rossie Priory who saw the benefit of it when it was becoming an economic proposition. He introduced it into his estates for the benefit of his tenants. The first engine he purchased was one in 1863 which was rebuilt three years later. He is also recorded as having purchased engines in 1872.

There were a small number of other farmers who worked with steam ploughing in the county: James Playfair of Coupar Angus in the early 1870s. That family was noted for its enterprise, and”business character”. There was also James Adamson of Blairgowre, in the mid 1860s.

The purchase of these engines and their arrival in the districts where they worked was noteworthy and attracted the attention of the local press. On 4 October 1872 the Dundee Courier noted that: “James Playfair esq of Isla Bank, having some time ago got one of the above machines from Messrs Fowler & Co, Leeds, it was on Tuesday for the first time put to work on a field in the Haughs. Being the first machine of the kind in this district, it attracted the attention of a goodly number of onlookers during the course of the day. The plough did its work very satisfactorily. The agriculturists who were present expressed themselves highly pleased with the quantity and quality of the work performed by the machine.”

Even in the early 1880s James Playfair continued to add to his steam ploughing tackle. He purchased a subsoiler which he could use for reclaiming land. In 1884 he purchased a grubber and an elevator from the recently defunct Kincardineshire Steam Ploughing Company Limited, the most successful steam ploughing company in Scotland.

While we do not know when Playfair’s tackle was sold, we do know that the last set of steam ploughing tackle in the county was sold in 1893. This was a set sold at a displenishing sale at Maggotland, adjoining Inchture Station, tenanted by Mr John Scott, formerly and for many years the manager to the late Lord Kinnaird. The Dundee courier records on 4 August 1893 that “a speciality of the sale was a set of steam tackle, specially adapted for carse farming. It was first offered in the sump, but the final offer being considered inadequate, it was decided to sell the material in lots, The engines brought from £27 to £31, and though the gearing, ploughs, harrows, grubbers &c were sold at low prices the lot brought more than double what was offered for them in the sump”.

Steam ploughing took a long time to return to Perthshire. The engine was Master, an 1918 John Fowler & Co (Leeds) Ltd engine, owned by the Cook family of Leven, Fife. This engine and its partner Mistress can be seen at the Scottish National Ploughing Championships at Bowhouse, St Monans, Fife, 26-27 October.

The photos were taken at the Morris Leslie vintage weekend, 20-21 September.