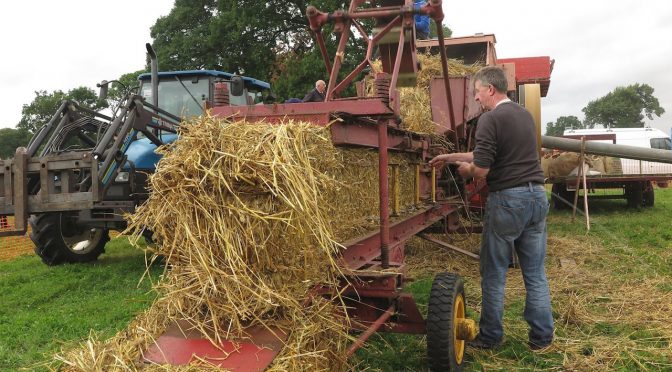 Henry Stephens, the well-known agricultural writer, wrote about the use of portable threshing machines. He makes an interesting comparison between the threshing system in Scotland and England. His account is worth quoting at length:

“The portable form of threshing-machines prevails in England. As a rule, there is no threshing-machine of any kind in English farm-steadings. The threshing is done by traveling machines owned by companies or individuals, who may have several machines at work in different parts of the country at one time.
Several leading firms of implement-makers have given much attention to the manufacture of portable threshing-machines, and now the farmer has ample choice of machines of the highest efficiency. These portable threshing-machines are usually worked by steam traction-engines, which also draw them from one place to another. In some cases portable steam-engines are employed in working the machines, but then horses have to be used in taking the machine from farm to farm.

In a modern portable threshing machine, the operations of threshing, dressing, and bagging, all going on simultaneously. The machine is supposed to be working in the stackyard. The stacks of grain as they get filled have to be conveyed to the granary-but that is easily done.
The disposal of the straw entails more labour. It is usually formed into a large stack at the rear of the threshing-machine, and the conveyance of the straw from the shakers to this stack is, in most cases, accomplished by means of elevators, which can be lengthened and raised in the pitch as the stack increases in height.

The number of persons required to work these portable threshing machines varies according to the operations performed and the speed of the machine. Ransomes, Sims & Jefferies, point out that the economy of threshing must depend in a great measure on the proper distribution of the hands employed, and state that the force, when straw-elevators are not used, should consist of eleven men and boys, to be engaged as follows: “One to feed the machine; two to untie and hand the sheaves to the feeder; two on the corn-stack to pitch the sheaves on to the stage of the threshing-machine; one to clear the straw away as it falls from the straw-shaker; two to stack the straw; one to clear away the chaff from underneath the machine, and occasionally to carry the chobs which fall from the chob-sprout up to the stage, to be threshed again; one to remove the sacks t the back of the machine as they are filled; and one to drive the engine. The feeder, on whim very much depends, should be an active man, and should have the control of the men stationed near the machine. He should endeavour to feed the drum as nearly as possible in a continuous stream, keeping the corn uniformly spread over the whole width. The two men or boys who untie the sheaves should stand on the stage of the threshing-machine, so that either is in a position to hand the feeder a sheaf with ease, but without obstructing the other. The men on the stack must keep the boys or men on the stage constantly and plentifully supplied with sheaves, which must be pitched on to the stage, so that the boys can reach them without leaving their position. The main who removes the straw from the end of the shaker should never allow it to accumulate so that it cannot fall freely. The man whose duty it is to clear away the chaff and cavings from underneath the machine must not allow these to accumulate so as to obstruct the free motion of the shoes; he must watch the basket under the chob-spout, and as soon as it is full, empty its contents on to the stage, in a convenient position for the feeder to sweep the same, a little at a time, into the drum to be threshed over again. The man who attends to the sacks must remove them before they get so full as to obstruct the free passage of the corn from the spouts, otherwise the clean corn may be thrown out at the screenings-spout.

When a large quantity is being threshed at one time, additional hands may be required to take away and stack the straw. It is better to cart the sheaves to the threshing-machine than to shift its position in the stackyard. The engine-driver, during threshing, should be as prompt as possible in attending to the signals for stopping and starting, and he should carefully attend to the bearings of the drum-spindle and other spindles of the threshing-machine.

Steam or oil-engines are fast taking the place of horse-power in working threshing machines. Where the supply is plentiful, water still holds its own, and will continue to do so, for it is the cheapest of all motors for the purpose. But the horse-wheel is gradually disappearing, and, for threshing purposes, the windmill may be said to have gone.

The steam engine, in its various forms is suitable for farm work. Steam power possesses two important advantages: it is always at command and can be completely controlled. By the use of steam the threshing may proceed continuously as long as may be desired; while, except in the rare cases in which the force of running water is sufficient to drive the mill-wheel, the threshing for the time ceases with emptying of the “mill-dam”. Experience has abundantly proved that threshing machines dependent on water derived chiefly from the drainage of the surface of the ground, frequently suffer from a short supply in autumn, and late in spring or early summer, thereby creating inconvenience for the want of straw in the end of autumn, and the want of seed or horse-corn in the end of spring. Wherever such casualties are likely to happen, it is better to adopt a steam-engine or oil-engine at once.

The other advantage is also important. Water or horse power cannot be so nicely governed as steam or oil, and, as a consequence with these powers, irregularities in feeding-in the grain or variations in the length of the straw are apt to make the motion of the corn-dressing appliances irregular, which, of course, causes imperfect dressing.”

What a great account! It would be interesting to note what were the districts in Scotland where the travelling mill was prevalent.

The photographs were taken at Farming Yesteryear, Scone, September 2017.