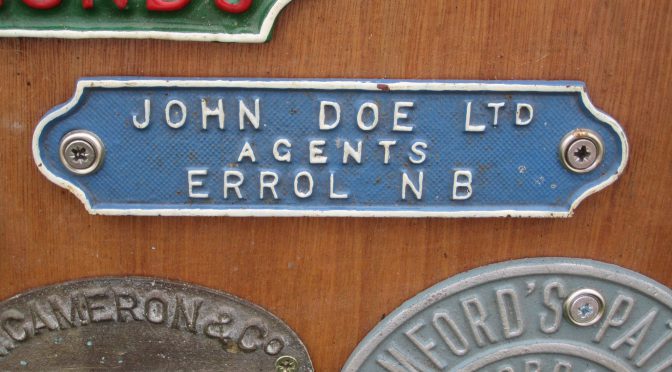 If you were a farmer in Perthshire and surrounding districts before the early 1960s you may have been familiar with the name of John Doe & Co. Ltd, Perth and Errol.

John Doe was already an agricultural implement maker and dealer at Errol, Perthshire, by 1868.  By the 1870s the company extended its business into Dundee, with a depot at 22 South Union Street, and Inchture.  By the early 1882 a premises was opened in Perth, at 20 Caledonian Road, which was to remain in the company’s hands into the early 1960s. 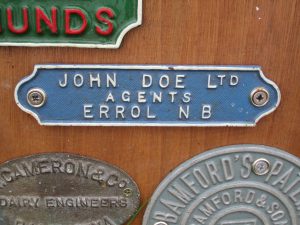 The company was renowned as an agent, holding agencies for many of the leading makers across Scotland and England.  The first agency recorded, in 1869, was for A. C. Bamlett, Ripon, Thirsk, one that continued for decades, and for which the business was renowned.  If you were a visitor to any Perthshire farm with a Bamlett machine, you knew that it had come from John Doe.  By 1881, Doe was also agent for Ransomes, Sims & Head, as well as more local makers Mollison of Ruthven, J. D. Allan & Sons, Dunkeld. By 1896, agencies included those of Massey Harris Co. Ltd, London, R. Hornsby & Sons Ltd, Barford & Perkins, Peterborough, Oliver Plow Company, South bend, Indiana, J. & F. Howard, Bedford, Thomas Corbett, Perseverance Iron Works, Shrewsbury, John Baker, Wisbeach, and Richmond & Chandler, Manchester.

The reputation of its agencies was well recognized by farmers and agricultural societies.  The Highland and Agricultural Society of Scotland awarded a number of medals to John Doe for its collection of implements and machines at the Highland Show.  They included medium silver medals in 1871, 1875 and 1876.

John Doe was also a noted implement and machine maker.  In the mid 1930s its own manufactures included rollers, drill ploughs, grubbers and turnip cutters.

The company played an important role in ensuring that Perthshire farmers, and those in the surrounding counties, could obtain the latest implements and machines from leading makers.  It helped Perthshire, and especially the Lowland districts, to become a leading agricultural district from the 1870s.

The photograph was taken at the Strathnairn Vintage Rally, 2014.