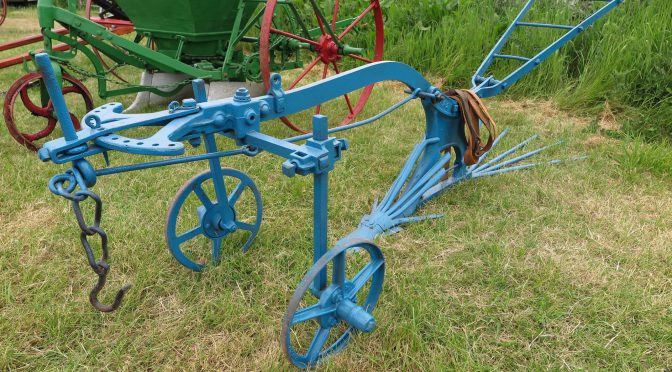 The digging of the tattle crop changed beyond all recognition during the course of the twentieth century. 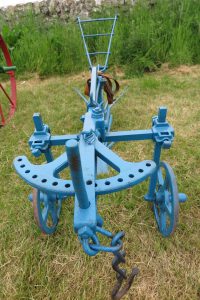 Back in the nineteenth century the spinner digger, patented by J. Hanson, in 1855, was a revolutionary device, throwing out the potatoes from the drill.  Before its development, the crop was dug out of the ground by two means: the potato graip and the plough.

The potato plough was the most expeditious way to harvest the crop. A number of types of ploughs were used. Sometimes the ordinary plough was used, with the coulter removed and the mould board substituted for a frame of bars through which the soil could pass and help to separate it from the tatties.  One such plough was developed by John Lawson of Elgin by 1844 (https://archive.org/stream/bookfarmdetaili00stepgoog…).

Special tattie lifting ploughs were also developed.  They generally had a broad share to pass under the bottom of the drills in which the tatties were growing and a device which helped to loosen the soil and potatoes in the drill.  The photographs show one from Ransomes, Ipswich.

While potato ploughs were among the older technologies for harvesting the tattie crop, they continued to be used until well through the twentieth century.  They were especially associated with the harvesting the first earlies which required to be gently handled so that the tubers would not be bruised. 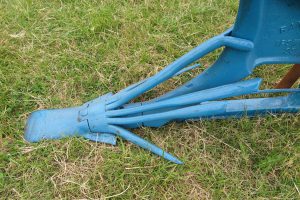 There are not too many tattie ploughs around the vintage tractor and machinery rally fields.  If you see one you will know that you are looking at one of the older harvesting traditions associated with the tattie crop, and one that has its roots in the early days of field cultivation of this most valuable tuber from the late eighteenth century.

The photographs of the tattie plough were taken at the Fife Vintage Agricultural Machinery Club Farming Heritage Show and Annual Rally, Cupar, 5 June 2016.