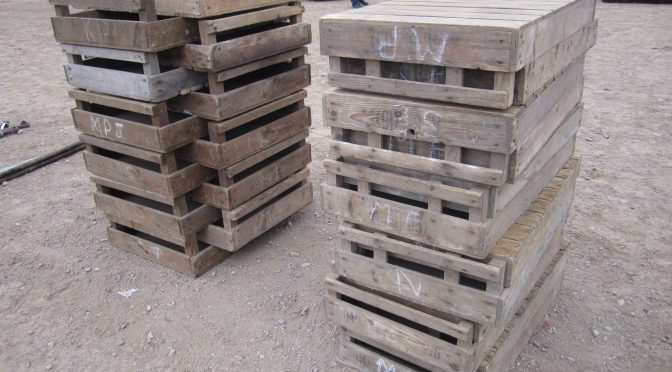 The introduction of tattie chitting trays brought a new line of work to local sawmills and box makers in parts of Scotland. 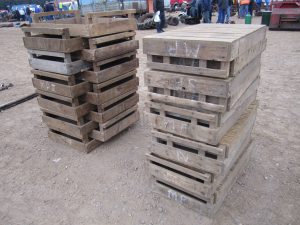 The boxing system of preparing potato sets was, according to John Speir, Newton Farm, Glasgow, in 1909: “introduced for the purpose of maturing the potato crop sooner than could be attained by the ordinary manner of planting.  It is said to have been first introduced in jersey, where it is extensively practiced.  Along the whole of the Firth of Clyde it is more or less in use on all the earlier farms, and more particularly in the neighbourhood of Girvan it has been carried to such an extent that several farmers there have upwards of a hundred acres of potatoes all planted from boxes.”

John Speir goes on to describe the boxes used at that time:
“The boxes may be of any convenient size or shape, provided they are not too deep, the size in most common use being about 2 feet long, 18 inches broad, and from 3 to 4 inches deep.  Each box generally holds from 3 to 4 stones of potatoes, the former being about the average.  The boxes are made of ½ inch deal, and have pins 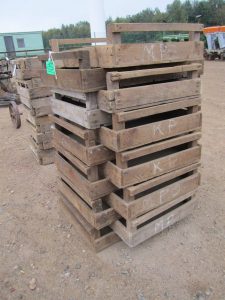 1 inch square and 6 inches high nailed in each corner.  The top of these pins therefore projects from 2 to 3 inches above the edge of the box.  These pins are strengthened in their position by having another bar, 1 inch square, nailed across the ends, and reaching from the top of the one corner pin to the top of the other.  These cross-bars also serve as handles for carrying the boxes, besides being in other ways useful.  In Jersey, and in many districts of Britain and Ireland, boxes about one-third smaller than above are preferred. These smaller boxes are much lighter to carry about, and the sets are planted direct from them.

Potatoes were boxed for seed between the end of July and the New Year. Filled boxes were placed in tiers in buildings that could be protected from frost over the winter months.

Local sawmills had their own patterns, making them to a specific size or to meet the needs of their customers. In later years plastic chitting trays became available. They were also put to a wide range of other uses on farms.

The photographs of the hitting trays were taken at the Scottish National Tractor Show, Lanark.