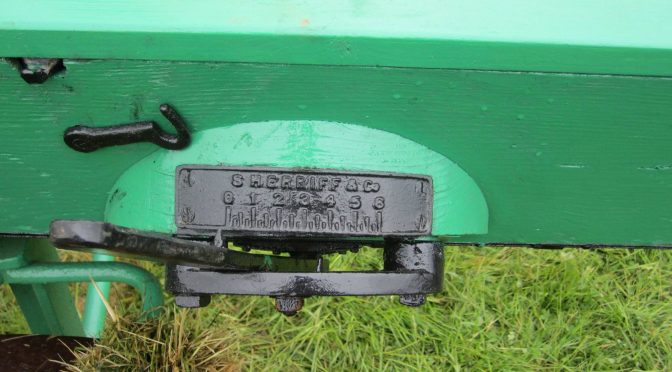 If you were a farmer or agriculturist looking to buy a new grain and grass seed drill you could chose one from a number of makers.
From 1816 the most renowned maker was Thomas Sherriff & Co., West Barns, East Lothian. Thomas made a number of sowing machines for crops, including drill crops, as well as associated implements and machinery for them including manure distributors and horse hoes.

Thomas first exhibited at a the Highland Show in 1852. He exhibited a drill sowing machine with land measures attached which he had invented and made. At the first of these shows he exhibited one or a small number of implements. However, Thomas died in 1857. His business was taken over by his enterprising widow, who transformed it into perhaps the most decorated agricultural implement maker in Scotland, winning numerous awards from the Highland and Agricultural Society of Scotland.

Mrs Sherriff retired from business on 19 July 1871. In an advert in the North British Agriculturist, she intimated that she had transferred her business to her present manager, Robert Robertson, whom she had authorised to carry on the business. He succeeded to the goodwill, stock in trade and tools of the business, carrying it on in the same premises under the name of themas Sherriff & Co. He continued the business, developing it further, until the mid 1900s when he died.

Further developments in seed sowers we made in following years. In 1924 the company entered a combined corn and seed drill and grass seed sower for the new Implement Award of the Highland Society. It was described as: “The machine is designed to sow 14 rows at 6 in apart; fitted with special steel coulters, which spread the grain 2 in to 2 1/2 in wide in the rows; without this adjustment, when sowing thick-skinneed oats, about 6 bushels per acre, allows the grain to spread out, and gives room for each grain rooted to spread, and gives a more equal sample of grain and straw. A new special tempered steel brush is fitted to each seed delivering pinion, which clears the seed-plate hole of barley awns or other dust, and prevents choking, and blanks in the seed rows. The grass and clover seeds are sown from a separate hopper, which is fitted with our patent steel brush distributor, and sows 28 rows at 3 in apart. The coulters are light steel, and put the seeds in a uniform depth of 1 in; can be varied. With this arrangement, owing to the seeds being all put in an equal depth, prevents the seeds being thrown out during severe weather in the winter months, and shows a saving of from 25 to 50 per cent in seeds. One lever controls the whole machine, lifts the coulters, and puts the sowing mechanism out of action. Does not require to be harrowed after sowing, owing to the light grass-seed coulters acting as a harrow.”

In 1927 the company entered a new combined hoer and cultivator for the new Implement Award of the Highland Society. At the time the company described it in great detail. It noted that it was “for sowing sugar beet, turnips, and other seeds, and hoeing and working same on the flat (or ridge if desired); will also work off land for planting cabbage or other plants, and hoe and work same. The machine is made to do four drills at a time; widths, 18 in, 20 in, 22 in or 24 in apart (standard), but can be made for other widths if wanted. The seed distribution is by our patent tempered steel brush, and will sow any quantity required. A special coulter bar and coulter delivers the seeds, and the coulters are fitted with a special v-shaped wheel following in the track of the coulter, but working independently of same, which presses in the seeds and gives an equal braid. Coulters are also depth regulated to fit various soils. A set of markers are also provided. One man and a pair of light horses required when sowing only. When sowing is finished the seed-box and coulters are removed, and an entirely new principle is adopted for hoeing. A special steel floating frame is fitted below main frame of machine. This frame carries the special channel steel section for the housing of hoes, and with two grooved pulleys in a horizontal position working on a steel pipe in front of machine. This frame is well braced and rigid. On top of main frame of machine an angle-steel frame carrying a seat and operating spindle and hand-wheel is bolted in position. To this spindle is attached a steel flexible wire rope, and operating on the floating frame running on the grooved pulleys. The hoes are fixed to the channel steel, in which notches are cut, into which the stalks of hoes are housed, and held rigid in position by eye-bolts. The stalks are round steel, and can be set to any angle required, and when screwed tight impossible to shift position. When hoeing, a lad sits on frame in front driving the horses, and a man on the seat behind operates the floating frame carrying hoes by the hand-wheel, and can move all the hoes in a parallel line with the plants, and with a root lever can lift the hoes out of the ground, instantly. The operator has a clear view of the plants to be hoed, and can bring the hoes close up to plants without risk of cutting them out. The machine being mounted on three wheels makes it steady on the land 8 or 10 acres per day can be wrought, and easy work for a pair of light horses.”

The company continued to be well recognised for its seed sowers,and the name Sherriff is still to the fore today for the sale of agricultural machinery. Have a look out for Sherriff seed drills around the vintage rallies – there are still a few around today!