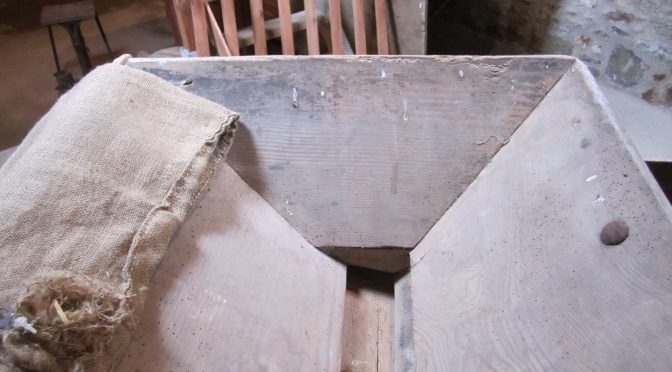 A number of implements and machines were used to process grain in the barn.  They included machines to dress grain. 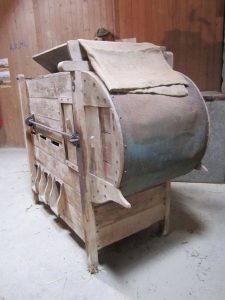 “In former times the threshing and dressing of grain were distinct operations performed at different times.  Now they may be said to be but two parts of one operation.  The modern threshing-machine is the most improved type is so admirably equipped as to efficiently clean and dress the grain, as well as separate it from the straw … Still there are many farms on which the threshing-mills only partially dress the grain, and not a few indeed, mostly of small size, where the threshing-machines do little or nothing except separate the grain and the straw.  Most probably another decade or two will see these latter cases reduced to rare instances; but that day has not quite arrived … 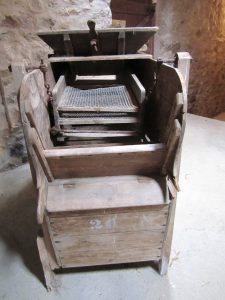 Corn-dressing machines-Some idea may, in the first place, be given of the machines employed in dressing corn.  They are often named blowers or fanners, because they blow away the filth from the corn by means of fans.  When cleaning-fanners are fixed to one spot, and are connected with elevators, they are generally of large dimensions, and of more complicated of large dimensions, and of more complicated construction than when made to be moved about the barn.” 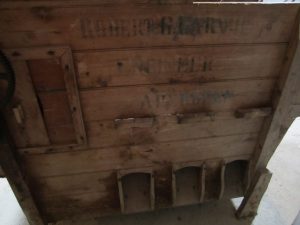 Despite Stephen’s predictions, fanners, winnowing and dressing machines continued to made and used on Scottish farms well into the twentieth century.  If you were a farmer in 1912, you could have purchased one from a number of Scottish makers.  Kemp & Nicholson, Scottish Central Works, Stirling, made Scotch fanners riddles (16×16 inches or 18×18 inches). Charles Weir, Implement Works, Strathaven, made barn fanners with four riddles and sand sieve which could be purchased for £6 10s. A. & J. Main & Co. Ltd, Edinburgh, made side delivery fanners, which could be purchased for £8 10s.

Today, a number of fanners can be seen in our agricultural museums and around the rally fields.  They tell and interesting story of grain processing, especially on some of the smaller farms, well into the twentieth century.

The fanners made by Robert Garvie were photographed at the Aberdeenshire Farming Museum, August 2014.