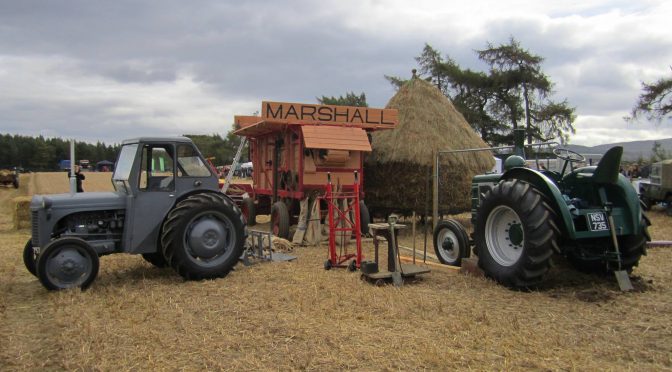 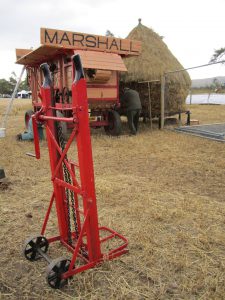 Displays of threshing using portable threshing machines are a popular feature at a number of the rallies in Scotland.

In the past the visit of the travelling mill was a big occasion for some farms, with a number of farms pooling together their workers to undertake threshing activities.

In 1908 Stephens’ Book of the Farm provides a detailed account of how the threshing team was organised.  It is worth quoting at length: 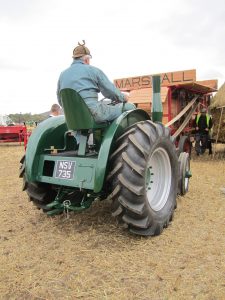 “The number of persons required to work these portable threshing-machines varies according to the operations performed and the speed of the machine.  Ransoms, Sims, & Jefferies, point out that the economy of threshing must depend on a great measure on the proper distribution of the hands employed, and state that the force, when straw-elevators are not used, should consist of eleven men and boys to be engaged as follows: 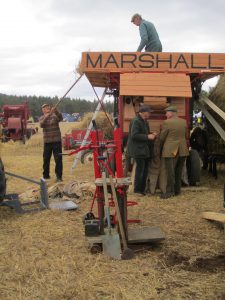 “One to feed the machine; two to untie and hand the sheaves to the feeder; two on the corn-stack to pitch the sheaves on to the stage of the threshing-machine; one to clear the straw away as it falls from the straw-shaker; two to stack the straw; one to clear away the chaff from underneath the machine, and occasionally to carry the chops which fall from the cob-spot up to the stage, to be threshed again; one to remove the sacks at the back of the machine as they are filled; and one to drive the engine. The feeder, on whom very much depends, should be an active man, and should have the control of the men stationed near the machine.  He should endeavour to feed the drum as nearly as possible in a continuous stream, keeping the corn uniformly spread over the whole width.  The two men or boys who untie the sheaves should stand on the stage of the threshing-machine, so that either is in a position to hand the feeder a sheaf with ease, but without obstructing the other.  The men on the stack must keep the boys or men on the stage constantly and plentifully supplied with sheaves, which must be pitched on to the stage, so that the boys can reach 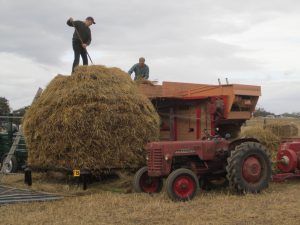 them without leaving their position.  The man who removes the straw from the end of the shaker should never allow it to accumulate so that it cannot fall freely.  The man whose duty it is to clear away the chaff and cavings from underneath the machine must not allow these to accumulate so as to obstruct the free motion of the shoes; he must watch the basket under the chop-spout, and as soon as it is

full, empty its contents on to the stage, in a convenient position for the feeder to sweep the same, a little at a time, into the drum to be threshed over again.  The man who attends to the sacks must remove them before they get so full as to obstruct the free passage of the corn from the sprouts, otherwise the clean corn may be thrown out at the screenings-spout.”

The photographs show a Highland threshing scene at the Strathnairn rally, September 2014.