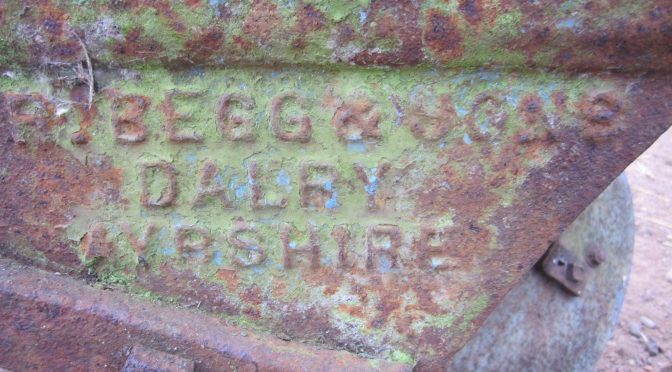 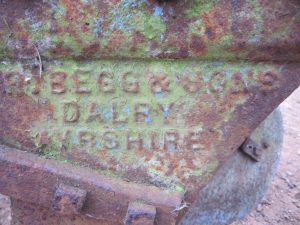 We know little of his early activities, though he was advertising his ploughs in the North British Agriculturist in April 1876. By 1903 he is recorded as being an agricultural implement maker, a retail ironmonger, a smith and a smith and farrier. By 1912 he was joined by his sons, naming his business Robert Begg & Sons. It was run by Robert Begg and his son John. Robert died in early 1927, and the business was carried on his son. John died by 1941 and the business was transferred to Robert Wilson, Barrhead, who continued it under Begg’s name. In 1951 the business became incorporated as Robert Begg & Sons Limited, but was out of existence by October 1976 and was dissolved in the following year.

Begg’s business was associated with Sharon Street, Dalry, where it is recorded in 1886 and into at least the 1950s. From 1914 his address was the “Implement Works, Dalry.” 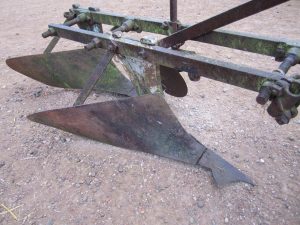 Robert Begg took an important step in developing his business in 1912 when he exhibited at his first Highland Show, held in that year at Cupar. This was the start of an association with the show that continued, more or less continuously, until 1960. Begg also took the important step of entering a plough into the Highland and Agricultural Society of Scotland’s exhibition of farm tractors and tractor implements in 1922. In following years, he also entered ploughs and other exhibits for the Society’s new implement award: in 1923, a double furrow self-lift tractor plough with self-lifting gear, and in 1928, Falconer’s patent mouldboard and Falconer’s coulter.
While Begg’s business changed with the times, so too did his ploughs. In 1914, Robert made a range of ploughs which included drill ploughs, double furrow ploughs, as well as bar point chill ploughs and chill ploughs. His chill ploughs were sold under the name “The Begg”. They were highly esteemed.

The North British Agriculturist provides some nights into the early activities of the company, in its recording of Robert Begg’s obituary. It states:

“The death occurred recently at his residence, Sharon Street, Dalry, of Mr Robert Begg, a noted agricultural implement maker, at the age of 86. Born at Snabe, Frumclog, in Avondale, he left school at the early age of nine to herd cattle in the neighbouring hills, and three years later he commenced his apprenticeship as a blacksmith with his elder brother at Eaglesham. Thereafter he returned to Snabe, where he carried on his father’s smithy until 1868, when he commenced, what later proved to be a very successful business at Dalry. the high-class quality of Mr Beg’s craftsmanship became widely known, resulting in the premises at Dalry having to be extended from time to time. The history of “Begg” ploughs dates back for nearly 60 years,a nd up to the close of his working days he was continually trying some new idea with the view of something still better. At the Highland and Agricultural Society’s tractor trials at Dalkeith, the Begg double-power tractor plough was one of the most efficient forward. Although always leading a busy life in the industrial world he took a keen interest in athletics and the breeding of black Spanish fowls, with which he was very successful in the showered. Mr Begg, who was preceded by his wife about 13 years ago, is survived by a family of three sons and four daughters.”

Today, you can still see Begg’s ploughs at some of the ploughing matches and at vintage agricultural machinery rallies around the country. Ask anyone who Begg was and they will say a leading ploughmaker from Ayrshire.

The photographs of of the Begg ploughs were taken at the Scottish National Tractor Show, Lanark, September 2014.