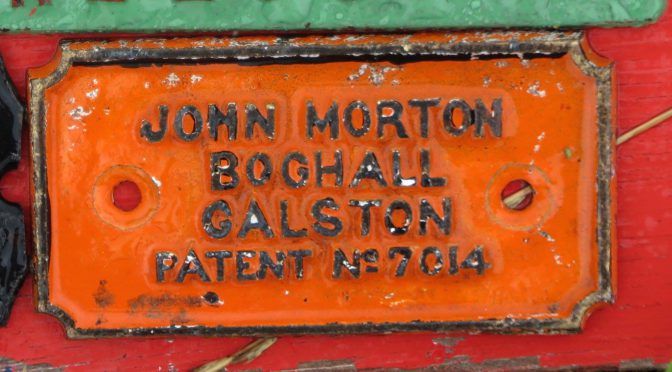 The historical record will only give us a few details about the work and activities of some of the Scottish agricultural implement makers. Sometimes they may appear fro a year or a small number of years in local trade and other directories. They may advertise on one or two occasions in the farming press. Or they may appear at the Highland Show when it was visiting their area. Local records such as valuation rolls, census and other family history papers may provide additional information.

One Ayrshire implement maker for which there are few details is John Morton, Boghall Smithy, Galston. He is recorded at that address in the mid 1890s. By the fiirst decade of the twentieth century he may have moved premises, as there is a John Morton recorded at Strath Road, Newmilns. At Galston, Morton undertook business which extended to the south of Scotland. He exhibited at the Highland Show in Edinburgh in 1893, at the Dumfries show in 1895 and the Glasgow show in 1897. There he exhibited his rick lifter and a patent steel plough. By the first decade of the twentieth century, trade directories record him as an agricultural implement maker, a millwright and a smith.

Have you seen any implements or machines made by John Morton?

The photograph of the nameplate was taken at Ayrshire vintage rally, July 2016.