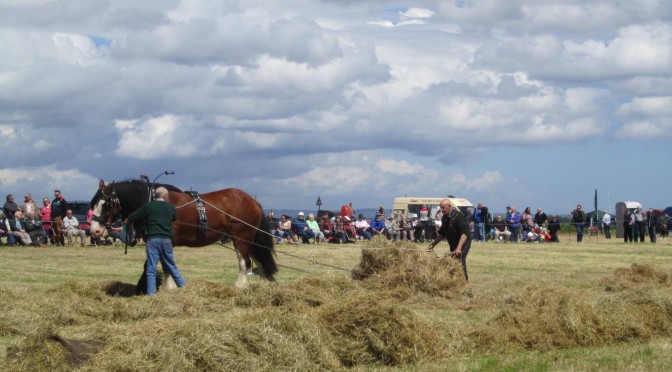 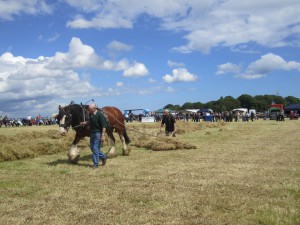 Scottish agricultural implements and machines from America have played an important role on Scottish farms since at least the early nineteenth century.  There are reaping machines, tractors, chilled ploughs, among the wide range of implements and machines.  On the hayfield was the American hay sweep, or the Tummlin’ Tam.  Its role was to gather hay across the swathes.  It allowed hay to be more easily moved around the hayfield in the course of its various turnings, cocking and re-cockings.

The Tummlin’ Tam was introduced into Scotland by Archibald Ronaldson of Saughland in 1828 (see http://archive.rhass.org.uk/…/transactions-of-rhass-…/172145). 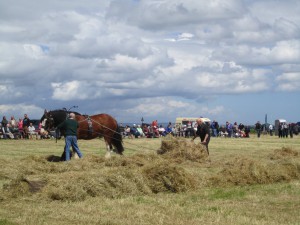 At first, it was much used in south-east Scotland before spreading to other parts of the country, and Britain.  It continued to be used into the twentieth century. Examples may be seen around the vintage rallies, as well as agricultural museums including Highland Folk Museum and Aberdeenshire Farming Museum.

Another American hay rake, the hay collect or sweep rake, was introduced into Scotland in the latter nineteenth century.  By 1889 the Acme Harvesting Co., Pioria, Ill, was making a sweep-rake.  It was about 15 feet in width with wheels at the side and had long prongs for collecting the hay.  It was introduced into Scotland by John Speir, Newton Farm, Glasgow.  He notes its reason for introduction: 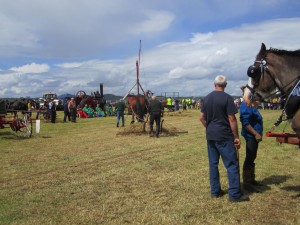 “Owing to the increase of cartage work which annually occurs on this farm at, or immediately after, hay-making, the stacking of the hay crop was often, prior to 1886, difficult to accomplish before harvest began.  In the spring of that year the idea occurred to me of combining the use of the rick-lifter and the horse-fork.  The former had been in limited use on a few upland farms on the borders of Ayrshire and Lanarkshire, and the latter was in general use in the hay-barns of America, and to a very limited extent in South Wales.  Two rick-lifters and a rse-fork were ordered in plenty of time, and on trial the combination turned out so successful that a second set was ordered by a neighbour for use that same season.  The combination of these two machines has been of immense advantage to farmers growing large areas of hay, and instead of the rick-lifter being confined to moorland districts, it and the horse-fork are now found on almost every farm in the west where hay is grown for home consumption or for sale to any considerable extent.”

Speir was of the opinion that “if we had a satisfactory machine for collecting loose hay, or which could bring hay in coils to the forkers at the field ricks, our method of making hay would be very much simplified, and the cost considerably reduced.” 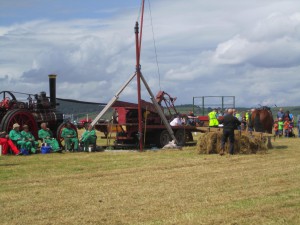 Speir used on on his farm and widely published his view on the usefulness of the hay collector in the North British Agriculturist and in the Transactions of the Highland and Agricultural Society of Scotland, thus bringing attention to this most useful implement.  The rest, they say, is history.  It became widely used in Scotland. When horses were replacing tractors, they were converted for use with tractors and continued to be used until balers entered the hay field.  In 1852 there were at least 27 makers of them throughout Britain, of which a good number were in Scotland.

America therefore had a long-lasting impact on the Scottish hay field, and one which radically transformed it.

The photos of the hay sweeps were taken at the Fife Vintage Agricultural Machinery Club rally, 2014 and the Borders agricultural machinery rally, 2015.