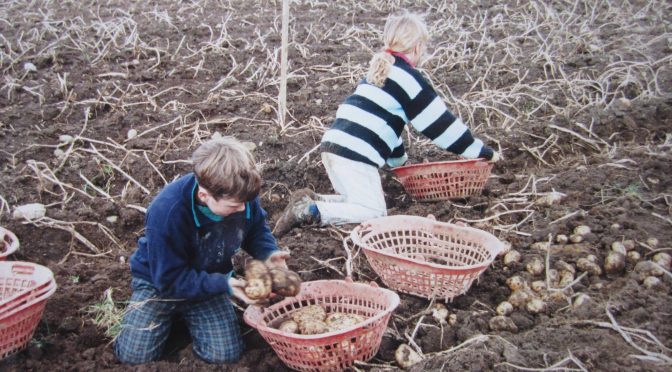 Many, if not all of us, will be aware of the “tattle holidays” a holiday given from school for a week or a fortnight during the month of October, at the time of the potato harvest, to enable school children to help at the potato harvest. 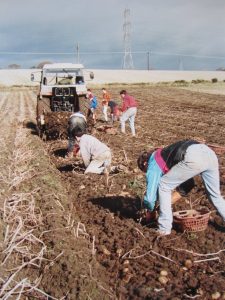 In some districts of Scotland children were an important source of labour for harvesting the crop. For farmers and other agriculturists it was important that they could draw on the services of the children. By the 1870s teachers and their school boards were not happy to see empty classrooms and schools as children went to the tatties instead of attending school; neither were the school inspectors or members of the school boards. And the Scotch Education Department – as it was known back then – considered this a serious problem. Potato harvesting became a “standing grievance” or even “an evil”. This was more especially so when school grants were paid on attendance: large numbers of children absent at the tatties did not help the school managers secure their grant for the year.
Teachers, school mangers and the Scotch Education Department looked for ways to deal with this “evil”. As schools were required to have a certain number of openings, the period of the summer holiday could be shortened and the corresponding period given in October to allow the children to assist with the tatties. So started the “tattie holidays” in some rural districts of Scotland.

It was up to individual school boards to decide whether they needed to grant a tattie holiday, and how long that holiday would be. The earliest ones varied from one to three weeks, with two weeks being widespread. Neighbouring parishes could have holidays of different lengths. One could have a holiday while a neighbouring parish did not. 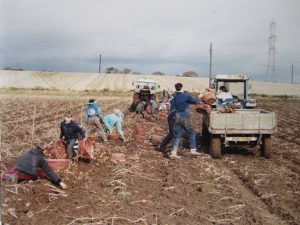 Even where tattie holidays were a well-established feature of the rural calendar, they were not always given every year. When the dates and duration of the school summer holiday was considered there was, at times, lengthy discussion on whether a tattie holiday should be given. That discussion and decision led to friction between farmers, parents and children and the education authorities.

There were often headlines in the press noting dissatisfaction of the holidays being granted or refused. on 4 May 1933 the Dundee Courier carried the headline “Potato holiday ban removed”. It noted how “Angus County Council yesterday turned down a recommendation of the Education Committee that potato holidays be discontinued.” There were extensive protests, petitions submitted, and deputations heard. It was a subject that raised passions. 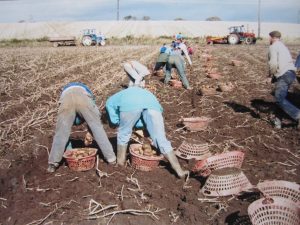 Tattie holidays were widely given during the time of the two world wars, where it was important that the increased potato acreage was safely gathered. After 1946 the attitude towards children picking or gathering tatties hardened. But by this time the tattie holiday was a well-established feature of life in many communities. So important was it in Perthshire that when the education authority tried to ban the holiday shortly after the end of the Second World War there were protests, and the authority had to back down and grant it. Some parts of Scotland, especially Perthshire, continued to grant potato holidays in following decades while others did not.
By the 1980s when the tattie crop was increasingly being harvested by complete harvesters, there was less need for tattle holidays to be given. But by that time educationalists started to consider that an autumn break for the children in October was a good thing: it broke up the long period from the end of the summer holidays until 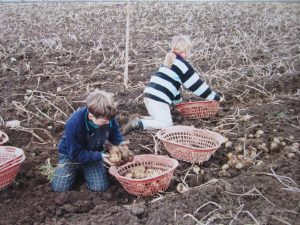 Christmas. They had held a long-standing view that children should have a long summer holiday and to enjoy the warmer weather, than have two weeks in the colder and darker month of October. So, the autumn holiday started across Scotland. Because of the strength of the custom of the tattie holidays – they had become an institutionalised custom by this time – they continued to be known as the tattie holidays, even though eventually children no longer came to undertake that work.

As well as being an institutional custom, these holidays were also a rite of passage for many children across Scotland. For many children it was their first wage and experience of paid work. The money formed an important part of the wages coming into households, paying for essential items such as boots and coats, or even Christmas. And of course, the boilings made an important contribution to the larder.

The photographs of the children at the potato harvest were taken at Blair Mains, Culross, in October 1990. The children were from Crossgates, Fife.