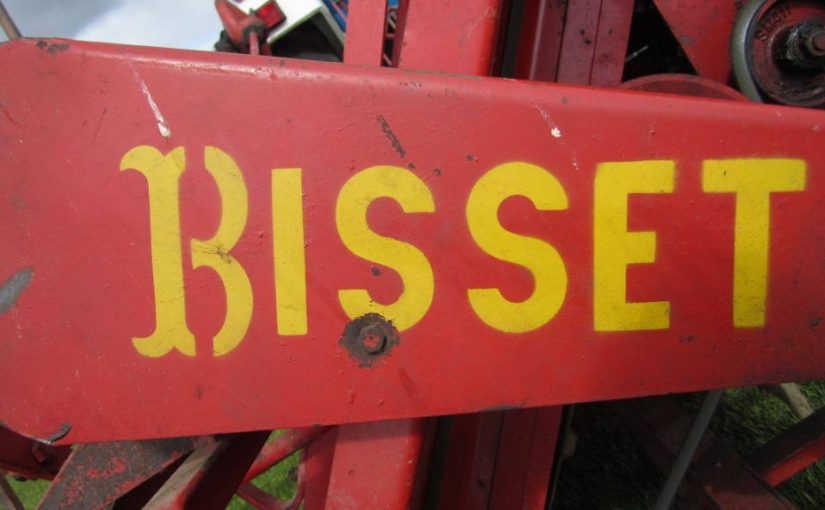 One of the well known implement and machine makers in Perthshire was J. Bisset & Sons, Marlee, which was set up in 1835. By 1883 it had expanded and set up implement works, Greenbank Works, on the Dunkeld Road, Blairgowrie where it remained into the mid 1960s.

One of the early members of the business was Mr Thomas S. Bisset, agricultural engineer at Bisset & Son, Blairgowrie. He died in August 1896. The Dundee advertiser of 29 August 1896 published an extensive obituary, providing information on his role and the wider business. It is worth quoting at length:

“Death of Mr Thomas S. Bisset, agricultural engineer
It is with great regret we have to announce the death of Mr Thomas S. Bisset, managing partner of the firm of Messrs Bisset & Son, Greenbank Works, Blairgowrie, which took place at his residence, Galabank, yesterday morning about eight o’clock. Although deceased had been in somewhat indifferent health for some time bank, there was no apparent cause for concern. As a matter of fact, he was attending to ordinary duties no further back than last Friday. On that day, however, he was suddenly taken ill, and his trouble assumed such a serious aspect that his medical attendant, Dr Hood, considered it advisable to call in the services of Dr Thomson, assistant to Professor Annandale, Edinburgh, by whom an operation of great difficulty was performed in a successful manner. The patient was never able to rally, however, and after lingering a few days, expired yesterday morning. He was 57 years of age.

Deceased was a son of the late Mr John Bisset, Balcairn, Marlee, who founded the firm of Bisset & Sons in 1835. Mr Bisset, sen, was a man of decided opinions of his own, and never was reconciled to the heavy iron ploughs which were in vogue so long. He lived long enough to welcome the lightly constructed American wooden ploughs as being more to his ideas. In 1862 the subject of the present notice visited the exhibition in London, and was so much struck with the reaping machines, then not long introduced, which he had seen there, that he returned home fired with the ambition to construct as good, and in the autumn of that year he designed his first self-acting back delivery. The new machine took well, and. A large number of strong plain “Blairgowrie Reapers” were turned out, as well as potato diggers, &c. In 1867 he patented his steel-lined finger for reapers and mowers-an improvement which is now adopted by every maker in the country. In 1878 he constructed the “Scotia” mower and reaper, the first enclosed gearing made in Britain. About nine years ago the firm began the manufacture of self-binders, and their successes everywhere will be fresh in the minds of the agricultural public. In every competitive trial in which they have taken part they have invariably taken a leading position, and the firm is still the only makers of self-binders in Scotland. Besides designing harvest machinery of a variety of types, the improvements he effected on other agricultural implements, such as potato diggers, potato planters, &c, proved him possessed of great constructive ability. He was never done experimenting in order to improve his machines in convenience, lightness of draught, &c, and every season saw a steady advance upon the previous one.
About 20 years ago, owing to rapidly increasing business, a site at Greenbank was secured, where the present works were erected. Since then they have been extended several times, and it is only this season that new and commodious offices were added. Mr Bisset was a man of great mechanical ingenuity and business push, and showed a great deal of courage and enterprise in carrying on the large concern with which he was connected. He knew the value of being kept continually before the public, advertised well, and never missed having some of his machines at every show of importance.

He was a member for three years of Kinloch School Board, where he succeeded his father. On removing to Blairgowrie he entered the School Board there, and had been a member for nearly six years. He took great interest in educational matters, particularly technical education, the value of which he set very high and believed in greatly as a means for the retention and extension of the commercial prosperity of the country. He was a staunch member of the First Free Church and a sound Liberal. He married a daughter of Mr Gibb, Middle Park, Ashmore, by whom he had seven of a family.
Deceased was a man of perfect probity and trustworthiness, and as such was held in highest esteem by all who came in contact with him. He was a man of few words, and those he used were invariably direct to the point; but he never had the least difficulty in making up his mind on any subject, marking out his own line of duty or action, and proceeding therein with unflinching steadfastness.
There are a few anecdotes which may illustrate the natural mechanical turn of Mr Bisset. As a great reader of engineering papers, he observed in 1868 that bicycles were being constructed in Paris. From illustrations of one, he constructed a very useful machine, upon which he rode a journey of 30 miles soon after. He used to claim that he was the first maker and rider of a bicycle in Britain. The machine is still to be seen. He also made a capital ball-shooting gun for his own use out of horseshoe nails in his 18th year. When about 23 years of age, hearing that McCormack, the American maker of reaping machines, was to start one at Dunkeld for the Duke of Atholl, Mr Bisset, full of enthusiasm, set off to see it. The machine broke down, and, with the Duke and Duchess looking on, McCormack was in a great state of nerves. Young Bisset pushed forward to see what was wrong, and something in his bearing caught the eye of McCormack. “Are you a worker in iron?” asked he. He replied he was. “Can you men that, do you think?” “I think I could”, was the reply. McCormack asked him to do it then, and accordingly Mr Bisset shouldered the broken part of this reaper, and carried it to a smithy at Dunkeld. There he repaired the machine satisfactorily, and assisted the maker in starting it. McCormack complimented him as a clever workman, and gave him a half-sovereign-the first money he ever earned from reapers.
Mr Bisset was a keen angler and a strong swimmer. In latter years he had little leisure for the outdoor sports he delighted in when a young man. Of an evening then he would think nothing of swimming across Marlee Loch and back again-a feat few, if any, in Blairgowrie could perform.

Mr Bisset will be greatly missed in the agricultural districts of Central and Eastern Scotland, where he was well known and perfectly trusted. He had gained the thorough confidence of the farming community by his thoroughness and downrightness as a practical engineer and man of business. With a strong liking for a sweetly moving piece of mechanism, he had at the same time a scorn for things that would not stand wear and tear. Few men in his line of business were so quick and shrewd as he in making practical use of floating criticisms in regard to machines. A strong man in mechanical affairs, and knowing his own mind very clearly, he had a swift instinct in catching new ideas. If he had a fault at all it was in being over-eager, and in allowing his own marked individuality to have rather free scope. He was present at the binder trials held near Perth on the 18th of this month, but to some of his more intimate friends on the ground he remarked that he ought to have been at home and in bed. At Perth market yesterday the news of his death was received with great regret by agriculturists in general.”