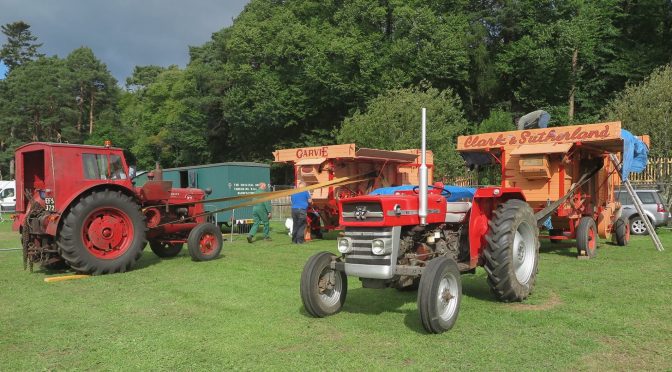 There are relatively few accounts of the premises belonging to the Scottish agricultural implement makers. They tend to be recorded when an important maker is opening a major works, or through destruction by fire.

One of the most important makers in Aberdeen and the north-east was Robert Garvie of Harrogate Works, Aberdeen. He opened a new premises in December 1894. A number of accounts for it exist in newspapers. The most detailed account was published in the Aberdeen press and journal on 1 December 1894. It provides a lot of information not only about the works but the arrangement of the different departments from one another. The details also suggest the scope of activity that was going on at the works. It is worth quoting at length.

“The spacious new works in Hardgate, the property of Mr Robert G. Garvie, agricultural implement manufacturer, have now been completed, and all the departments are in operation, between 80 and 90 men employed. The fact that it has been found necessary to provide an establishment on so large a scale would seem to point to the growing importance of the manufacture of agricultural implements as an industry in the north-east of Scotland. Fully an acre and a half of ground has been taken off in a very convenient site on the south part of Hardgate, and the buildings that have been erected are admirably adapted for their purpose. The frontage to the street is constructed of granite, and has a substantial though plain appearance. The offices &c, are situated here, while the various departments of the manufactory stretch back to the west. The principal entrance is from Hardgate, at the north-east end of the feu.

There is a wide covered-in gateway, and the passage leads along the northern boundary to a large yard on the extreme west. At the entrance a six-ton steelyard is laid down, the register being taken in a comfortably-appointed forwarding office. A stair leads from this apartment to the suite of offices on the floor above, but before describing these, it is to be noted that, adjoining the forwarding office, and running for 70 feet parallel with the street are a number of stores, from which doors open into the sections of the works occupied by the various classes of employees. From this section access is also found to a large store-room for binders, reapers, and traction engines. The faces are very convenient and well lighted, the windows facing Hardgate. They are four in number. One is occupied by draughtsmen, another by clerks, another is a private room for the use of Mr Garvie, and the remaining room will also be utilised in connection with the commercial department. These rooms are about 21 feet by 15 feet by 10 feet, and are lined with varnished pitchmen. Drawings of various implements relieve the walls; office furniture of a substantial make is provided; an arrangement of speaking tubes is in use; and the gas fittings throughout are of the most modern description. The lobby which connects the rooms is pierced with windows in such a way as to allow an unobstructed view of the whole of the interior of the works. At the south end the carrier opens into the pattern shop, which measures 40 feet by 27 feet by 10 feet and above there is a lumber loft of considerable dimensions. This exhausts the accommodation on the east side. Passing down a stair from the pattern department the visitor finds himself in the section occupied by the staff of joiners. This section is one of three, all of which lie east and west, and each of which measures 140 feet by 45 feet-the ridge springing some 30 feet from the level of the ground, and the eaves 15 feet. The structure is of corrugated iron and glass, and the couples are made of malleable iron, painted in a light blue colour, the framework has a pleasing appearance, and the effect is equally attractive when the place is illuminated by the large number of sun gaslights which have been erected. The joiners’ department is different from the other two in respect that it has a wooden flooring, and in it the machinery is driven from below. This last arrangement is a feature. Roof shafting, when in constant use, causes a vibration which, in course of time, proves very damaging to a building, and to obviate this an ingenious arrangement has been introduced by which the walls and roof are left untouched, the motive power being conveyed from a sunk floor.

The middle section is where the fitters are employed. An extensive plant has been laid down for the manufacture of specialities in agricultural implements, and to facilitate the work there is a five-ton travelling came, which can be brought into requisition in any part of the shop. It is at the east end of this section that the engine room is situated. The room is neatly built of wood and glass, the engine itself being of about 20 horse power, and constructed on the compound principle. Below the engine room there is a concrete cistern of 24 feet by 12 feet for collecting the rain water from the roof, and this water, augmented when occasion demands from the Corporation mains, supplies the boiler and the cooling tanks. A stone wall separates the fitting department from that used by the smiths, where there are no fewer than nine furnaces. Specially worthy of notice among the machinery in use here is a self-acting five cwt steam hammer. A portion of the accommodation is partitioned off, and utilised for the storage of iron. The foreman of the works has had fitted up for his use an office, from which all parts of the establishment are equally accessible. To minimise the risk of fire as much as possible, a site for the boiler-house has been found at a considerable distance from any of the other buildings. The boiler is 12 feet by 6; works at 100lbs pressure; and is provided with an apparatus for economising fuel. Pipes covered with asbestos and waterproof carry the steam to the engine room, and the smoke passes off the furnace by a stalk about 100 feet in height The other outdoor premises comprise two sheds, one 90 feet by 30 feet, for seasoning wood, and the other 60 feet by 20 feet, for the storage of wood that has been prepared. In the yard there is also a three-ton crane. What strikes the visitor as he walks through the extensive premises is the completeness with which every detail has been carried out. Nothing has been left undone that is likely to facilitate the work undertaken, and the hope may be expressed that before long it will be found necessary to occupy the remaining portion of the feu with extended buildings.”

Next time you see a Garvie mill – or any of Garvie’s implements and machines – know that they were manufactured in a purpose-built works in Aberdeen.

The photographs of work at the Garvie mill were taken at the Deeside rally, August 2018.