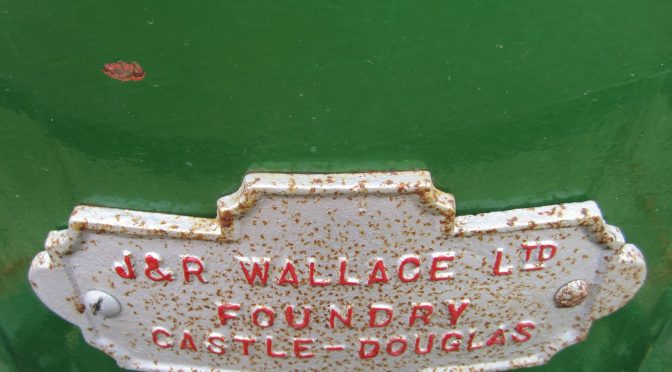 If you were to purchase a milking machine in Scotland in 1952, you would likely purchase one from an English maker. Some of them were well-renowned and had names that were synonomous with dairying and milking machines. They included Alfa-Laval Co. Ltd, Cwmbran, Newport, Mon, R. J. Fullwood & Bland Ltd, London, Gascoignes (Reading) Ltd, Reading, Melotte Separator Sales Co. (1931) Ltd, Grantham. and Simplex Dairy Equipment Co. Ltd, Cambridge. 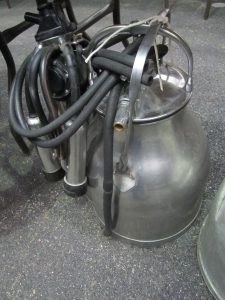 This milking machine was described at length by the Society: 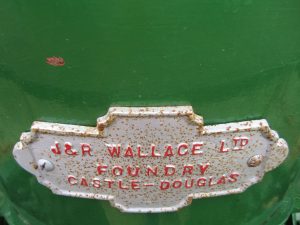 “This machine is operated on the principle of a vacuum pump, as in the case of other milking machines exhibited at the Society’s Shows since the first apprearance of the Murchland machine at Doncaster, in 1891; but its novelty lies in the use of atmospheric motors suspended beneath the cow and worked in conjunction with double-walled cups. The various parts consist of a collapsible rubber sleeve or tube of triangular shape, which without effort is pushed into an aluminium case, the one end becoming air tight by this act. Intthe other end is pushed an aluminium plug, on which is mounted the atmospheric motor. In operation, a constant vacuum is maintained in the interior of the cup. The atmosphere seeking admission operates the motor, which in turn first admits the air between the rubble cup and the outer casing, thus effecting an active emphatic pressure on the teat, and secondly causes a withdrawal of this pressure to the interior of the cup. The pressing and relaxing action can be regulated to any required speed.
The exhibitors state that the motors, which are furnished with cup leathers like an ordinary air or water pump, will last for years, and that the wearing parts are renewable at a small cost. They also claim that the effective intermittent pressure exerted allows of the natural circulation of the blood in the teat whilst suspended in a vacuum, and that thus the cows do not experience the uncomfortable sensation which would otherwise cause them to withhold their milk.
A really good milking machine would provide a great boon to the large dairy farmer who, in these days, finds great difficulty in procuring good milkers by hand. The following are the essential points that should be observed in the construction of milking machines: ease of cleaning; efficiency; power to strip; non-injuriousness to the cow; simplicity of construction, either for the process of milking or for obtaining the vacuum; cheapness.
We received at the conclusion that in the short time at our disposal, it was impossible adequately to test the machine in the Showyard, and we therefore recommended that there should be such an impartial trial as would give information as to the efficiency of the machine and its effect on the cow. This recommendation was adopted by the Council, and arrangements were made for the practical trial of the machine by Mr Eric Druce, Principal of the Bedfordshire Agricultural Institute, Ridgmont.

The following was Mr Druce’s report after a trial which lasted for two months:
I have had the machine working for two months and have used it upon some ten or twelve cows. I beg to state-
1. There is no difficulty in getting the cows to take to the machine. After the second or third time of using the cows stand perfectly quiet during the whole of the time occupied in milking; this the attendant is able to look after four sets at once.
2. The cows are milked absolutely dry; no “strippings” can be obtained. The quantity of milk given is as much as, and in some cases more than, when the cows are milked by hand. The time occupied in milking is the same as that which a skilled milker would take,
3. The machine is simple in its structure, and is easily cleaned. The manipulation is very readily learnt; in fact during the second half of the time I have had it, it has been worked by an ordinary stockman without any assistance from me.
4. The only fault I can find with the machie is that the size of the cups is too small for some of the cows with large teats. This defect, however, could easily be remedied by making cups of different sizes.
5. I can give no figures as to the cost of running, as I used a small petrol engine especially to work the machine; whereas on a large farm the ordinary fixed engine or horse-gear would do the work equally well.
Eric Druce, November 13, 1905.
Upon receipt of this report, the Judges, with the approval of the Stewards and of the Council, had no hesitation in awarding a Silver Medal for the machine. The fact that no “stripping” by hand is necessary is of great importance.

Other early makers of milking machines in Scotland included the “Murchland” made by William Murchland, 13 Bank Street, Kilmarnock, and The Thistle Mechanical Milking Machine Company Ltd, 25 Gateside Street, Glasgow. Both participated in the trial of milking machines of the Highland and Agricultural Society of Scotland in 1898 (see https://archive.rhass.org.uk/…/t…/617154-volume1898-0089jpg…).

The Society later published an investigation into the use of milking machines in Scotland in 1917. (see https://archive.rhass.org.uk/…/transactions-of-rhass…/602974).

The photographs were taken at the Scottish National Tractor Show, Lanark, September 2015 and the Strathnairally, October 2015.