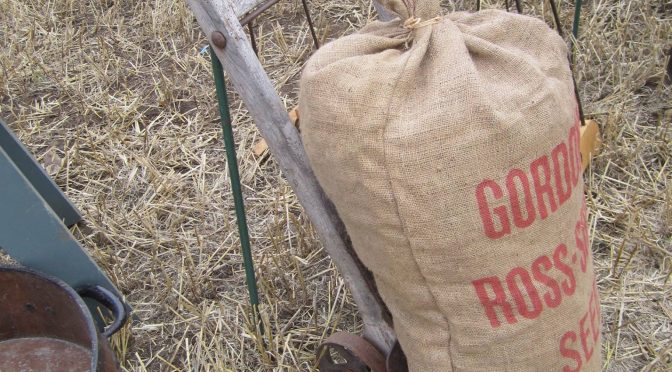 Sack barrows were an important piece of barn equipment for moving grain and other foodstuffs around. Barrows came in all shapes and sizes, and had a great impact on how easy or otherwise it was to move produce around. In 1875 Thomas Gibson & Son, Bainfield Iron and Wire Works, West Fountainbridge, Edinburgh, made a number of sack barrows. These included the light sack barrow, the heavy sack barrow and the wood sack barrow. Other companies such as Ben Reid & Co., Aberdeen, also made an iron sack barrow. In 1900 William Elder, Berwick Upon Tweed, made and sold “various” sack barrows. 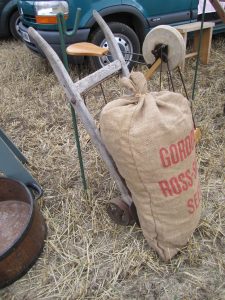 Designs also changed with the time. The development of pneumatic tyres in the early 1930s gave rise to a new generation of sack barrows with tyres. But the older designs also survived, and on some farms older designs were used alongside new ones.
When I started barn-work back in the 1980s, we still had the old fashioned wooden sack barrows that the older farm workers used. My father had also more recently purchased a metal barrow with tyres from a farm sale. He gave me the choice of barrows to use and to use the one that was easiest to move the two hundred weight bags of grain around. He liked the wooden barrows with its small wheels. As a novice you could get the wheels stuck in any rough patches of the barn floor. Not only were you trying to get the barrow out of one of these patches to get it moving again, but you also had two hundred weight of grain to hold onto at the same time and make sure that you didn’t loose the balance on the barrow. That then was a disaster!

The metal barrow with tyres was a winner. It was easy to balance the two hundred weight of grain and if you got stuck in a rough patch on the barn floor you could rock the barrow back and forth to get it moving. And you could run with the barrow! And have a lot of fun with it!

I never went on to use the old wooden barrow. It was one that had been well-used in the past. It stood beside the bruiser that hadn’t been used for years. The barrow was a reminder of the changing designs in barn equipment and changing tastes as new designs were developed and made available.